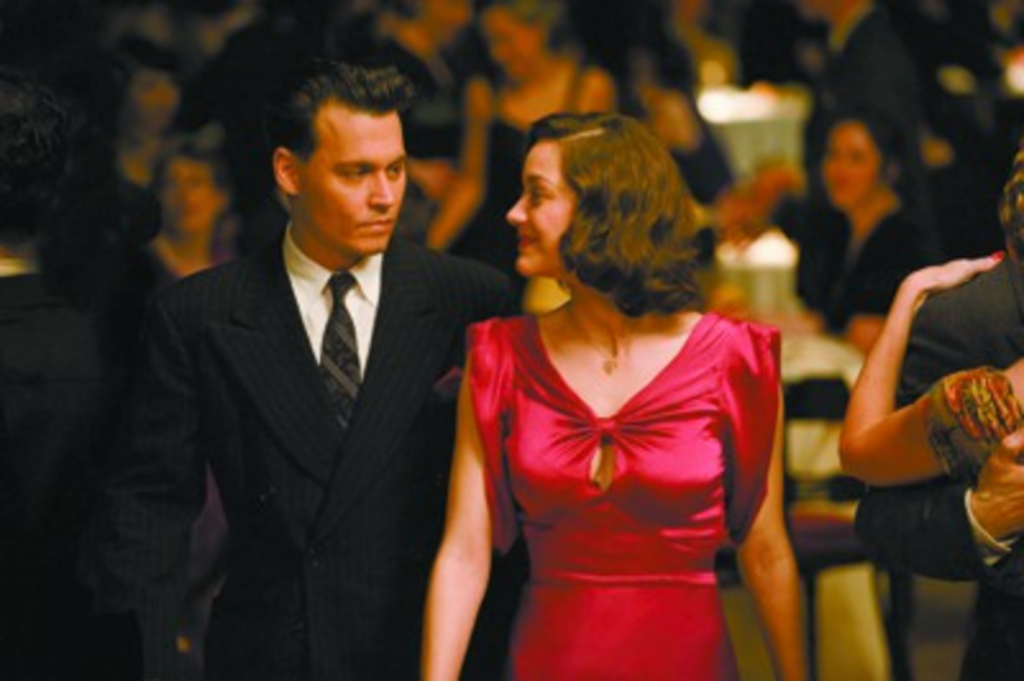 They’re all about where people come from. Nobody seems to wonder where somebody’s going.” So says the Depression-era bank robber and folk hero John Dillinger, upon surveying the clientele of a chic Chicago eatery in a key scene from Michael Mann’s Public Enemies. And, much like its subject, Mann’s exhilarating movie exists in a state of perpetual forward motion.

Dillinger (played superbly by Johnny Depp) spends most of the movie on the run, and so does the movie itself. But even when Dillinger is at rest — in jail or in the arms of a woman — Public Enemies exudes a nervous tension, the sense that flight is imminent. (One of the more tense scenes takes place at a traffic light.) It’s a feeling that Mann intensifies by shooting the entire movie with a battery of high-definition video cameras — most of them handheld — that record the action in violent jolts and swooshes, the way things might look if Dillinger were still robbing banks today, his exploits captured by camera phones and broadcast over YouTube. The result, like Bonnie and Clyde 40 years earlier, is a period gangster movie that scarcely feels period at all, from its sense of style to the state of the nation’s banking industry.

Visually, Public Enemies seems like the summation of something Mann has been steadily building toward ever since he first incorporated video-shot footage into the dynamic opening training montage of Ali in 2001. Where digital methods have gradually become the industry standard by simulating the dense, luxuriant textures of film, Mann embraces video precisely for the ways in which it is unlike film: for the hyper-real clarity of its images, for the way the lightweight cameras move through space, and for its ability to see sharper and more deeply into his beloved night.

The sounds and images rush at you, headlong, and before you can fully get a handle on them, something else takes their place, as if by a brusque stroke of the painter’s brush. (I am haunted by one particular shot, of Dillinger being wakened by gunshots while hiding out in Wisconsin’s Little Bohemia lodge, the camera springing off his body as if it, too, had been startled from sleep.) Much of Public Enemies wouldn’t look out of place in a video-art gallery space.

Dramatically, the movie offers a variation on a favored Mann theme — an elegant professional criminal and a dogged lawman (here, Christian Bale’s implacable G-man, Melvin Purvis) pursuing each other into an existential void. Although the credits say the screenplay was adapted by Mann and two other writers from Vanity Fair reporter Bryan Burrough’s 600-page account of the 1930s interstate crime wave and the rise of the FBI under J. Edgar Hoover (played by a very amusing Billy Crudup), the movie Mann has made more often suggests a period redo of his own 1995 crime saga Heat, albeit reduced nearly to the point of abstraction. There are long stretches in Public Enemies when it feels as if Mann would be happy to film nothing but men in tailored suits and charcoal overcoats slicing through landscapes, illuminating the night with bursts of yellow gunfire. Some storied members of Dillinger’s gang are barely afforded a closeup or a line of dialogue, while Dillinger himself emerges as the tersest in Mann’s gallery of flinty, self-aware men of action. In lieu of the crackling monologues by which Mann characters often assert their raisons d’être, Depp says, simply, “I’m John Dillinger. I rob banks.” Likewise, those robberies are brisk, expedient affairs rarely lasting more than two minutes each. Where Mann staged the heist sequences at the center of Thief and Heat as a kind of grand opera, Dillinger’s are closer to proletariat street theater.

Compelled by processes, Mann saturates Public Enemies with vivid details, never belabored, of ’30s-era intelligence-gathering techniques and the minutiae of Dillinger’s balletic jailbreaks. Above all, he seems fascinated by the process of death itself, when it comes to those men determined to cheat it. Early in the film, Purvis finds the body of a slain colleague moments before the man takes his last breath. Later, when he and Dillinger meet for the first time, the robber says to the lawman, “It’s the eyes, ain’t it? They look at you before they go, and then they just drift away into nothing.”

Like many a Mann protagonist before him, Dillinger talks about getting out of this racket, of making one last score and then dropping off the map with his lover, the French–Native American coat-check girl Billie Frechette (an excellent Marion Cotillard), but even as he’s saying it, we (and she) don’t quite believe it. Dillinger seems no more able to stop robbing banks than Mann can stop making movies.

Fittingly, those two obsessions — filmmaking and lawbreaking — converge in Dillinger’s storied last stand at Chicago’s Biograph Theater. Dillinger was reportedly an avid film buff, who executed his robberies with an acrobatic flair derived from watching Douglas Fairbanks swashbucklers. But on-screen at the Biograph that fateful night was Manhattan Melodrama, a surprisingly unsentimental, proto-Mann 1934 crime drama starring Clark Gable and William Powell as childhood friends who grow up on opposite sides of the law — one a small-time hood, the other a D.A. — and compete for the affections of the same woman (Myrna Loy). What Mann and Depp do in that scene, as Dillinger watches this parallel version of his own life, ranks among the cinema’s most eloquent depictions of the way the spectator identifies with the moving image.

“Die the way you lived. Don’t drag it out,” says Gable shortly before being escorted to the electric chair — words that cut to the essence of Dillinger himself, as well as Mann’s interest in men who live by their own codes, outside the strictures of normal society. Seeing Dillinger’s face in the reflected light of the screen, it’s as if he sensed, even then, that while his own mortality lay in wait, his legend would long continue to flicker.