The past few months have yielded some especially strong local releases. The psychedelic rock of Lawrence Psychic Heat, AY-MusiK’s positive hip-hop, the Uncouth’s throwback oi — there’s something new for just about any taste. And five of the acts behind the best such recordings are playing in the area over the next week. Here’s what they have to say. 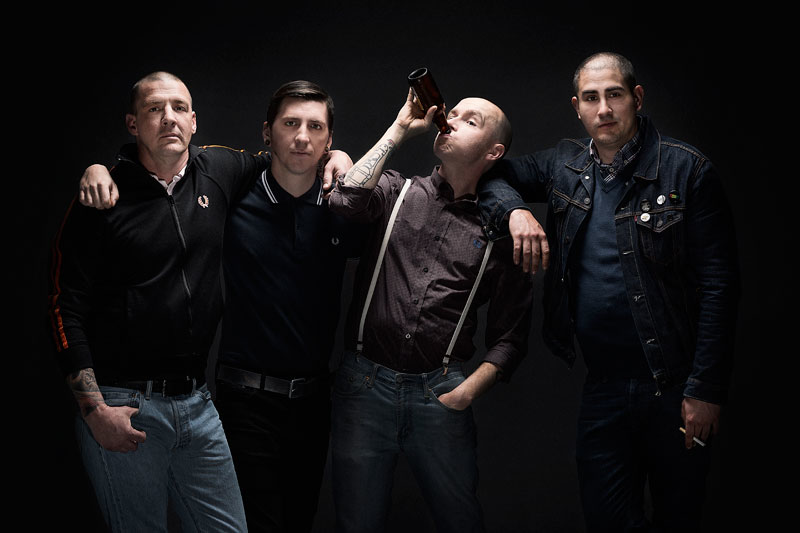 The Uncouth
Jonesy’s War
Teenage Heart Records
The Uncouth isn’t street punk the way you’ve come to expect from years of Dropkick Murphys, and it isn’t the latter-1990s oi that was more akin to old-school hardcore. The gang vocals and buzzsaw guitars let Jonesy’s War sound instead like a cross between Cocksparrer and Sham 69. Big production by Johnny Starke lets the EP open up and sound broader than four dudes playing punk rock usually does. The fact that the Uncouth also manages to avoid the jingoistic tones of many of its genre peers is a huge bonus as well. The title cut pays homage to a soldier who took his life, and “Living Wage” — with its demand for money enough to pay the rent — is pretty liberal for a usually right-leaning style of music.

Cody Blanchard (vocals and guitar): Really, it was a lot more intense than we had expected. Johnny [Starke, Teenage Heart] had a very clear idea of how he thought the record should sound, so not only did he push us really hard, but everyone else that we worked with as well. We went through two studios, a couple of re-recordings and numerous rescheduled vocal takes to get it right. Normally we are a one-and-done band, but Johnny pushed us to expect more from ourselves, and I think it shows.

Recording with Joel Nanos at Element was a really cool experience. He’s an easy guy to work with, and he wasn’t afraid to offer criticism or ideas. I’d love to record there again. The process was more serious for us with this release. We spent a lot more time picking apart the songs and finding better ways to get our ideas across, or ways to make the music more engaging. It got stressful here and there, but I think that’s a good thing.

Where are you going for the rest of the year?

The biggest focus is getting this release to as many people as possible. We have a few good road shows on the books right now. We’re playing the Midwest Live and Loud festival in Minneapolis, which is a three-day event featuring the best oi bands in the country as well as a few others from around the world. We’re also going to be putting together a tour of the Midwest, at the very least. We’d like to hit the coasts, but right now, the Midwest is where it’s at for the kind of music we’re playing. Other than that, we have a batch of new songs we’re putting the finishing touches on, so I imagine there will be another release before too long.

The Uncouth, with Anger Flares and Braindead
Tuesday, September 6, at the Blind Tiger

Four Arm Shiver
Something About My 20’s
Throwing Things Records
Pop-punk got a bad rap for a few years. For the better part of a decade, the music drifted away from the likes of Descendents and Lookout Records, and basically became weak alt rock with the occasional breakdown. The pop-punk underground has been bubbling back up in recent years, though, and bands like Four Arm Shiver and its compadres at Throwing Things Records have harnessed the punk part of the hybrid. The razor-throated vocals on the likes of “Haunted” definitely bring the sense of rebellion back, but Something About My 20’s benefits most from the fact that’s it’s almost nothing but mile-a-minute songs with a really robust sense of melody — songs you can both sing along with pump your fist to.

Logan Herrera (bassist and singer): We recorded at Revealed studios in Chanute, Kansas. You wouldn’t know it was there by looking at the building, but once you get inside, you see the game room and lounge and the sleeping quarters. But then you see the fully furnished studio and your heart stops. We’d go one weekend a month over five or six months. We’d get off work and rush down there on Friday and try to get as much done as we could until Sunday night. Cody Nichols, the engineer-producer of the record, put in a lot of hours and hard work. He made the whole experience surprisingly relaxed and low-pressure. His label, Smash My Records, released the record digitally and on CD, so he had a “let’s take our time and make sure we’re all happy” philosophy. He helped create a really comfortable environment for creativity. Cody’s simply the best.

Four Arm Shiver, with Some Kind of Nightmare and Lo Pan’s Revenge
Tuesday, September 6, at the Replay Lounge

The Conquerors
Wyld Time
High Dive Records
Every song the Conquerors have turned out on this debut is a catchy, toe-tapping, hip-shaking bit of wonderful. Peg Wyld Time as garage rock if you want, but the band isn’t beholden to any particulars. The title track could’ve easily fit in with the Strokes, whereas “Can’t You See” is the textbook definition of Beatle-esque (in the best way).

Rory Cameron (lead vocals and guitar): Luckily, that is the preferred format of Jeff McCoy [High Dive Records]. You can stream music all day long, if you’re going to actually buy an album vinyl makes the most sense.

What was it like recording a full-length after doing only singles?

We like the idea of singles, 45s, etc., and it was the easiest and fastest way for us to put those out because we were practicing at a recording studio and doing it all on our own. It was Jeff’s idea to do the LP. He gave us a deadline, and it was nice to know exactly what we were going for overall.

Where are you going for the rest of the year?

After the release shows over the next couple of weeks, we are going on a West Coast tour. After that, we have some solid shows coming up for the rest of the year. And we are always working on new material.

The Conquerors, with the Gorlons
Friday, September 2, at Mills Record Company 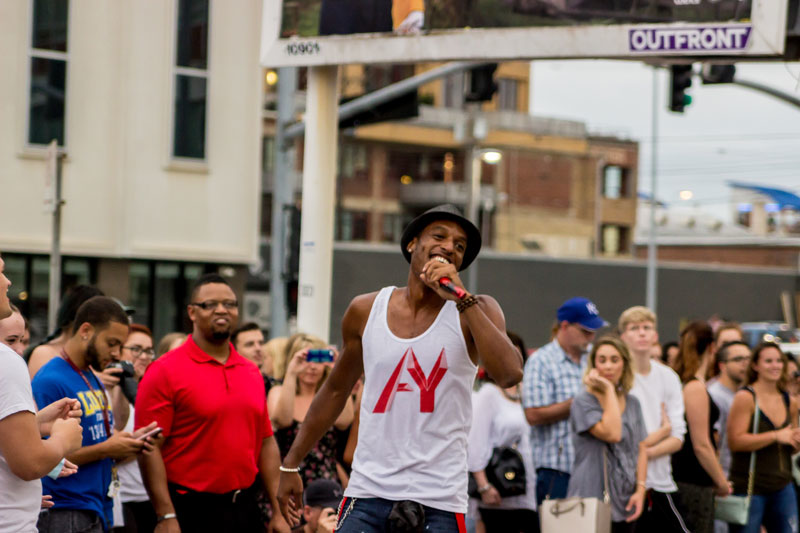 AY-MusiK
Above & Beyond
Self-released
If you haven’t locked into Above & Beyond by the end of “Wanna Be Loved,” the third song, you have no sense of joy. The gently loping, reggae-tinged track is so catchy and so positive, it does an even better job of encapsulating everything about what works for the rapper than the preceding “Say Hey,” which is ostensibly the record’s single. “Do What We Do” rides a killer hook from Hailey Canalas on top of some Roger Troutman-style vocoder action, managing to be sweet and dirty all at once. Throw in the bouncing “Little Bit High” and the insistent trap of “Up Down,” and this is a party starter in 14 tracks.

AY-MusiK: The process of recording my album was a journey. I spent the past years capturing moments in life and translating them into songs and lyrics. [It’s] a mix of working with so many different musicians and energies and various studios over the past five years. I have grown as a person, a writer and a performer in the course of making this album.

Why release on digital and compact disc?

I released on digital format because music is consumed at a high volume digitally. The compact disc is to be sold direct to consumer at every Battery Tour show. I have direct-to-consumer access with the people across America on my tour. Because I perform a concert on the street corner, I garner an all-age, all-demographic support base. The compact discs are easy to sell and hand out to our fans after performances.

What led you to choose the guests you did?

Every guest I included on the album came naturally. Christian Robinson — who is featured twice — is currently touring America with me now. It felt right adding Christian on the chorus of our upcoming single, “Wanna Be Loved,” and “One Desire” from the album. It was a natural fit. The other features happened naturally. EEMS — another guest on the album — is a rising star in Kansas City and happened to attend the same high school I did. 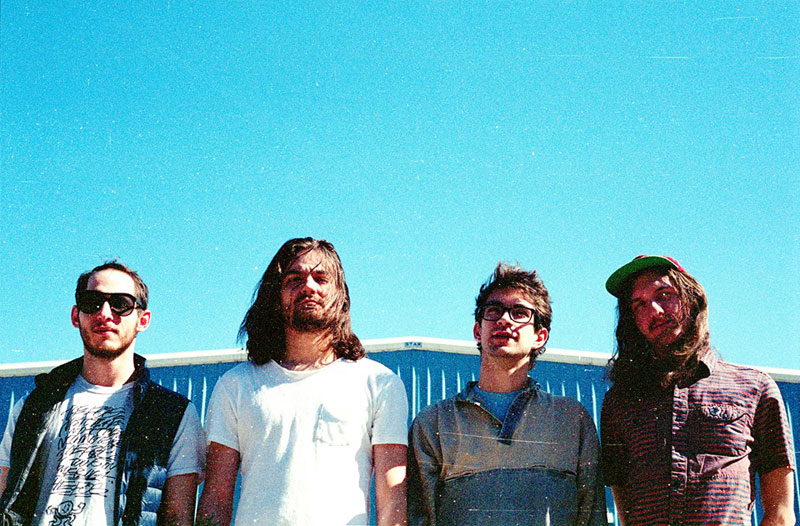 Psychic Heat
“Stranger” / “Starve” 7-inch
Replay Records
While Psychic Heat’s Sunshower LP — released earlier this summer on High Dive — worked in a jangly, psychedelic-pop vein, this new 7-inch ditches lo-fi production in favor of big, chooglin’ riffs on “Stranger.” The flip side, “Starve,” stretches out that formula into something akin to vintage shoegaze, dipping hypnotically. Combined, these two tracks are a big step forward for the Lawrence quartet.

Evan Herd (guitar and vocals): It was nice having only two songs to focus on, and I feel like we explored some more hi-fi aspects of recording, compared to our previous material. Isaac was fun to work with, and Jim Barnes did an excellent job mixing and mastering.

Why release on vinyl?

Herd: I’ve had a collection of local 7-inches for a while, and I like the idea of releasing a limited run of them as more of a collectable item. I also wanted to connect with Replay Records, since they have put out tons of rad local 7-inches and because the Replay Lounge has been essential to the local music scene.

Who took the reins on this single?

Spreer: It’s all very collaborative when we write. I wrote the instrumental skeleton of “Stranger.” Evan and Sam [Boatwright, bass] co-wrote Starve together with Sam taking rein on the vocals. Someone always starts the process, but we all end up connecting the pieces pretty equally by the end.

Herd: Yeah, definitely collaborative. I consider “Stranger” more of Tanner’s song and “Starve” definitely more of Sam’s song, but then I added the vocal part on the former and the guitar melody and texture on the latter. Everyone contributed their special parts to each song, though. These are our last recordings with former drummer Ricky [Barkosky] before he left for Germany, so I’m glad we were able to get him in for one last session.

What was it like recording a single so soon after doing an LP — did it feel different, exciting, nerve-wracking, invigorating?

Herd: The process of recording and releasing the LP took us a long, long time, so it was refreshing having another release to work on. It definitely sounds different then the LP, and it was exciting to mix up our sound a bit for it. We want to keep experimenting and see where it takes us.