Professional women’s soccer is live in KC for the first time in 1,003 days 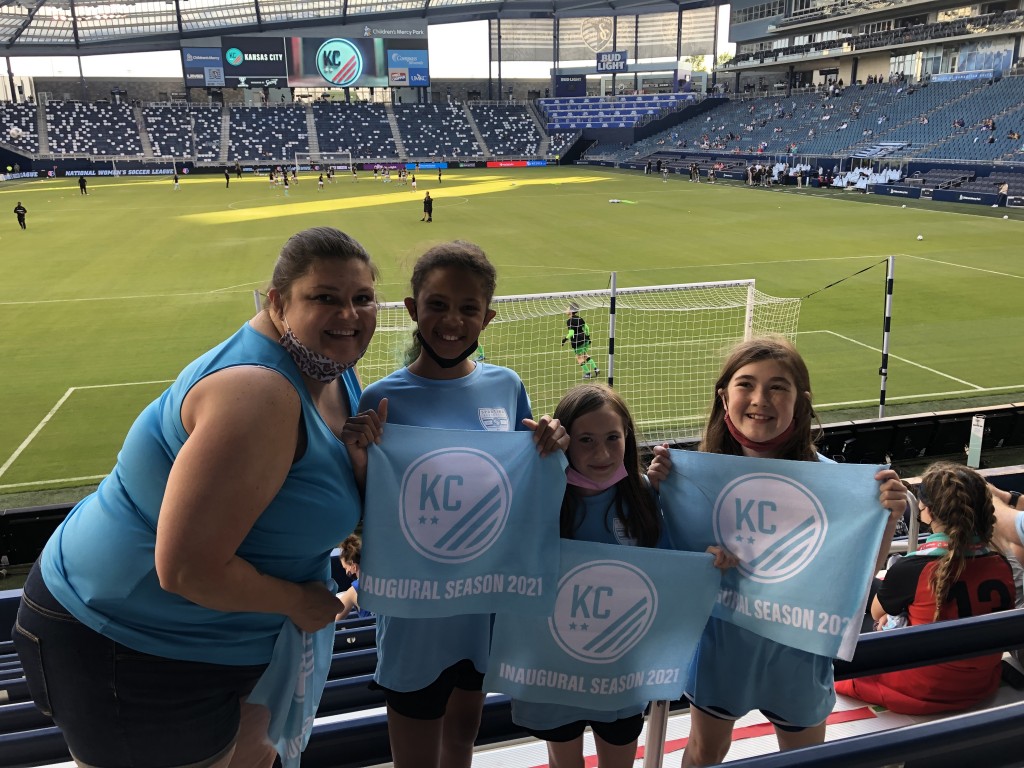 Sabrina Terhune, Lily Neer, Marissa Terhune, and Ella Connors. When asked how excited they are to watch the game, the three children all exclaimed, “Very!” // Photo by Joseph Hernandez

For the first time in front of a crowd in the greater Kansas City metropolitan area, it’s Teal Time.

KC NWSL, the brand-new professional women’s soccer team, played its first home game under the new moniker on Monday against the Houston Dash. The game was set for Legends Field, but construction delays were the cause for the delay in debuting the upgraded venue.

The buzz in the stadium and around the city is electric for the team. It’s coming off some wild games in the Challenge Cup, some of which included more action and fighting than what was seen in Godzilla vs. Kong. 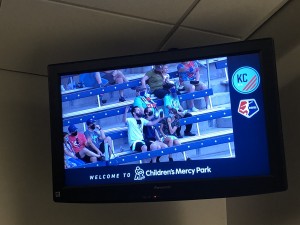 Ben McDowell with his daughters, Sophia and Elizabeth, pictured on the fan camera before the game. Sophia’s favorite position to play in soccer is defender, but she’s good at everything. // Photo by Joseph Hernandez

There’s a lot to look forward to. Sydney Miramontez, who played high school soccer at Shawnee Mission West, is making her home professional debut, and FC Kansas City originals Amy Rodriguez and Nicole Barnhart are making their returns to the soccer capital of America.

Tons of young girls who aspire to be like them on the field are in attendance with their families that are just as excited as they are. For many of them, this is their first time watching women’s sports in person.

“We’re really excited for this. I brought my daughter and her two friends from her soccer team, Brookside Soccer,” Sabrina Terhune says. “They wanted to watch a professional soccer game, so we got to come here.”

Terhune didn’t grow up with soccer, so she’s learning about the game with her daughter, Marissa, and her daughter’s teammates, Lily Neer and Ella Connors.

The Three Amigas were very excited to be in attendance for the game and wanted to see a lot of goals, presumably for KC NWSL.

Mishka Naiker moved here from Mobile, AL. two years ago and felt just like a child being here for her first game. She was looking forward to watching Houston Dash forward Rachel Daly and midfielder Shea Groom in action, along with seeing Rodriguez score another goal. 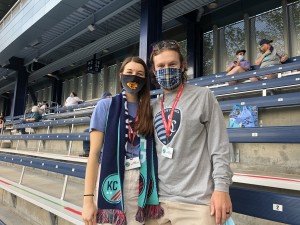 Kristy and Jacob Martin agree that it’s a huge win not just for Kansas City and women’s soccer, but for all demographics that KC NWSL is here. // Photo by Joseph Hernandez

Ben McDowell attended the game with his two daughters, Sophia and Elizabeth. This is a late birthday present for Sophia and some of her wishes including playing for the team when she’s older and catching a ball to the face.

“It’s been a while since the women have had a team and we really don’t know what to expect. We watched their first game on TV, but it’s really cool for them to be at (Children’s Mercy Park),” Ben McDowell says. “We’re super hyped that they’re here and it’s really cool.”

Jacob and Kristy Martin traveled from the hallowed streets of Ottawa, KS on this beautiful night to watch. It’s the first time they’ve been to a professional women’s soccer game and wanted to see a win at home.

“It’s exciting for us, especially since we’re around young people of different ages that love soccer,” Jacob Martin says. “To know that we can point at younger girls and say ‘hey, these are people that are doing what you want to do.”

“As someone that grew up playing club soccer in the Kansas City area and still never saw a FC Kansas City soccer game and that not being a part of what we were seeing as a club soccer team I think was a waste,” Kristy Martin added, “We never saw that level of competition and I think it was a missed opportunity. This is huge for that.”

Brenda Pluid and her children, Harper and Paxton, didn’t have this game in the cards for Monday. Their original plans included soccer practice for Harper, but her coach canceled practice. Someone nearby may have accused Harper and her teammate, Zoe Lewis, of skipping out on hard work, but Brenda came in and shut that naysayer down. 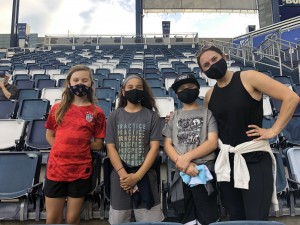 Harper Pluid, Zoe Lewis, Paxton and Brenda Pluid all skipped soccer practice to be here. The coach actually canceled practice, which gave them the opportunity to be here with Harper and Zoe’s youth soccer team. // Photo by Joseph Hernandez

The game itself was filled with action from both sides. Physical, fast, and creative plays from Houston and Kansas City kept fans entertained and engaged. The number of goals scored fulfilled the children’s wishes. It just so happened to be against the team they were here to see.

Houston dashed its way through the defense and the fan’s hearts on its way to a 3-1 victory over KC NWSL in the Challenge Cup. The women in white couldn’t overcome a rough first half in which they allowed two goals to Kristie Mewis and Rachel Daly, respectively. Mewis’s shot squeaked right past the fingertips of Barnhart, while Daly scored on a penalty kick after Rachel Corsie fouled her in the box, definitely appeasing Naiker in The Cauldron.

Nichelle Prince’s incredible run on KC NWSL’s side late in the second half led to Mewie’s second goal, where Mewie was able to tap it in after a crisp pass.

The crowd wouldn’t go home totally sad, as Michele Vasconcelos’s goal in the 77th minute led to an eruption from fans that hadn’t left. KC NWSL had plenty of chances prior, most notably on two screamers from Chloe Logarzo, but Houston was saved by the (Jane) Campbell and the Dash defense throughout the night.

Rodriguez addressed the crowd postgame, thanking everyone for coming out and apologizing for not bringing home three points. She also assured the fans that a win is coming soon, which may come in a flurry.

Barnhart said during a postgame interview that it was great to get the opportunity to finally play at home in front of their fans and that the team appreciates the support. She and Vasconcelos wish they could’ve got the win and said they’re working to get better for their followers.

While the result wasn’t what Sabrina, Marissa, Lily, Mishka, Ben, Sophia, Elizabeth, Jacob, Kristy, Brenda, Harper, Paxton, or Zoe wanted, we’re going to be seeing a lot of teal around the city in the immediate future. Women’s professional soccer is here to stay.

Let’s kick out the jams! pic.twitter.com/M9fSTfoKoo