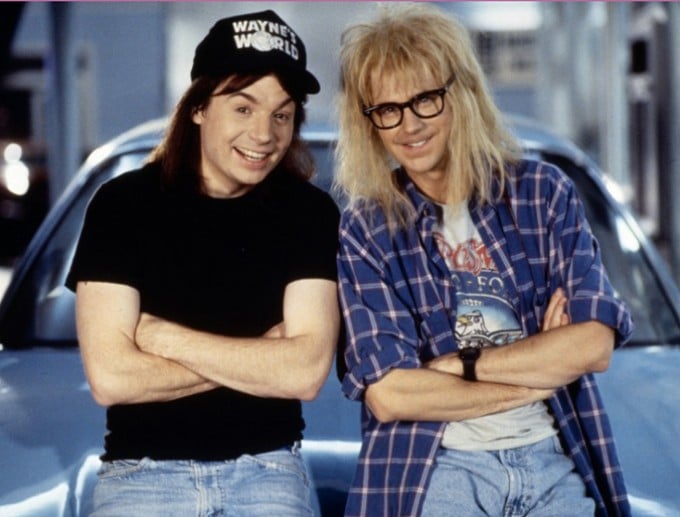 When I was 20 years-old I moved to Los Angeles in January of 2000. I barely scraped by working for a dot com company. Does the youth know what that means? My studio apartment, by MacArthur Park, had a Murphy Bed. At the time I thought a bed that could hide in your wall like a deleted chapter from an Edgar Allen Poe story felt very fancy, as did the french doors that led to a deeply unsafe balcony. I couldn’t afford cable and since the Internet wasn’t the robust nightmare machine it is today I had a television/VCR and one VHS tape of Wayne’s World as my only form of entertainment. Excellent.

I decided to challenge myself by seeing how many days in a row I could watch Wayne’s World before I got sick of it. The answer? Six months. Why? The tape broke.

In 2006 I not at all triumphantly returned to the Washington, DC area. Eventually I started working at a media company where I created and then became the director of a true crime festival. I’m a fan of the genre. Obviously the pandemic means no events which of course means no job for me. I don’t like to brag but being unemployed while millions of other people are also unemployed is probably the most normal thing I’ve ever done except decide to start a podcast version of my festival that is more of a talk show than anything else.

Fast forward to November of 2020. We are knee-deep in a contentious election and a “hey still here guys” pandemic. Returning to old habits and drowning in nostalgia is on every agenda. For me this includes moving back in with my mother, dying my hair back to its natural hair color and watching Wayne’s World.

Sha right. It’s been a while since I’ve really sat down and watched the movie in the intense, desperate way that I watched it in LA 20 years ago.

As the movie begins we meet Wayne Campbell and Garth Algar while they are filming their public access show Wayne’s World in Wayne’s parents’ basement. They are clearly in their late 30’s. After they finish taping the show Wayne, played by Mike Myers, breaks the fourth wall to introduce himself and provide a little back story. That’s when I realize I have become Wayne Campbell. Incidentally Being Wayne Campbell is the follow-up to Being John Malkovich I crave.

While staring straight down the lens of the camera the viewer hears:

“My name is Wayne Campbell. I live in Aurora, Illinois, which is a suburb of Chicago—excellent. I’ve had plenty of joe-jobs; nothing I’d call a career. Let me put it this way: I have an extensive collection of name tags and hairnets. OK, so I still live with my parents, which I admit is both bogus and sad. But at least I have an amazing cable access show! And I still know how to party! But what I’d really love is to do Wayne’s World for a living. It might happen! Shyeah, and monkeys might fly out of my butt.”

Please allow me to introduce myself. “My name is Jenn Tisdale. I live in Crofton, Maryland, which is a suburb of Washington, DC—excellent. I’ve had plenty of office jobs; nothing I’d call a career. Let me put it this way: I have an extensive collection of business cards and sensible black slacks. OK, so I still live with my parents, which I admit is both bogus and sad. But at least I had an amazing true crime festival called Death Becomes Us! And I still know how to party! But what I’d really love is to do Death Becomes Us as a podcast. It might happen! Shyeah, and monkeys might fly out of my butt.”

Stay with me because this could get complicated, not like flat Earth / QAnon complicated, but there will be some threads to follow. Wayne Campbell, the main protagonist, is America. His ex-girlfriend Stacy, who is in denial about their breakup, is Donald Trump. Benjamin, the uptight conservative bottom line money guy is Conservatives and Cassandra, Wayne’s bass-playing new girlfriend will be our Biden/Harris/Liberals. I could equate everyone in the movie to something happening in the United States but I think it would be too much and God knows America is the land of reasonable proportions.

Let’s start with Stacy who, much like a certain current President of the United States, hasn’t quite come to grips with the fact that Wayne has dumped her. When we first meet Stacy she gives Wayne an anniversary present after they’ve broken up. What was the present you ask? It’s a gun rack. Only a lunatic who jerks off to the 2nd Amendment would give someone who seemingly has no positive relationship with guns, a gun rack. What is Wayne gonna do with a gun rack? One could argue the gun rack is a representation of 4 more years under Stacy. Gosh this also feels suspiciously like Trump moving forward with his 2021 budget plan despite recently being voted out of office. Trump, we broke up 2 weeks ago. Get The Net.

Wayne and Garth then head to the Gasworks, a live music venue which at this point in the pandemic is both satisfying and depressing to see. It is here Wayne first lays eyes upon Cassandra (Tia Carrere) playing bass in her band Crucial Taunt. Cassandra, a woman of color, is also the lead singer. It’s not often one gets to see a woman of color fronting a band, with some straight white men at her side. In fact it feels as if this is the first time we see a WOC in a position of power, in a band. The song Dreamweaver plays as Wayne imagines seeing sparkles around her head. It’s clear Cassandra is being placed on a pedestal. I too get a boner for strong women. Schwing. Wayne asks Cassandra out and she tells him to show up to an event she’s throwing at her loft. It’s only $5 to get in because it’s important to financially support her and the band if you want them to succeed.

It really feels like Wayne is moving in a positive direction, until he is approached by Benjamin (Rob Lowe), a television producer who has a deal Wayne couldn’t possibly turn down. You see Benjamin would like to take all of Wayne’s rights…to the show. Benjamin doesn’t really care about rights, but he does care about all the money he can make off Wayne and the show if he has full control of the rights…to the show. And because Wayne is not much of a fighter, for now, he gleefully sells them for a mere $5,000.

With money in hand, Wayne and Garth happily head to Cassandra’s loft party. Money really does make everything better! For now. At the party, Wayne and Cassandra sneak off to the rooftop for a private chat where they are interrupted by Stacy who loves to interrupt. She is clumsily making out with another man but it is clear Stacy only has eyes for Wayne. Wayne tries to explain to Cassandra his complicated and highly toxic relationship with Stacy.

He feels “pretty responsible for her self-nullifying behavior.” Yes Wayne, I would say you’re correct. The systematic racism and oppression of POC in this country directly led to the election of Donald Trump in 2016. Cassandra, very kindly and insanely tells Wayne he is “allowing himself to be victimized,” because he hasn’t been “effectively assertive.” Oh, Cassandra, I find it quite upsetting that you’re willing to let Wayne off the hook here. He didn’t allow himself to be victimized. Wayne was complicit.  What he didn’t assert is the very obvious idea that racism, misogyny, and homophobia (to name a few) are very bad ideas. Wayne then calls Stacy a psycho hose beast. No arguments there.

Wayne’s inability to fully put his trust into Cassandra drives a wedge between them which allows Benjamin to dangle a promising music career in front of her. Broken and confused, Wayne devises a plan to get Cassandra back. However he can’t carry out this plan on his own. It takes a pretty intense system of grassroots organizing comprised mostly of BIPOC and members of the LGBTQ+ community to pull off winning this election… er winning Cassandra back.

Wayne is able to lure a record executive to his basement where Cassandra and her band are performing! We are then given three possible outcomes for the movie. And the election.

In the movie we ultimately get the Mega Happy Ending and as of now, actual America is getting it as well. While most of us are semi-tensely waiting for the official outcome and if we’re honest, Joe Biden’s inauguration, allow me to give you some hope in the form of Wayne’s World 2. In the first scene, we see Wayne explaining why the show has a new time slot. You see White Supremacy World was canceled.