A PAC supporting Schmitt responded with an ad of its own attacking Greitens. 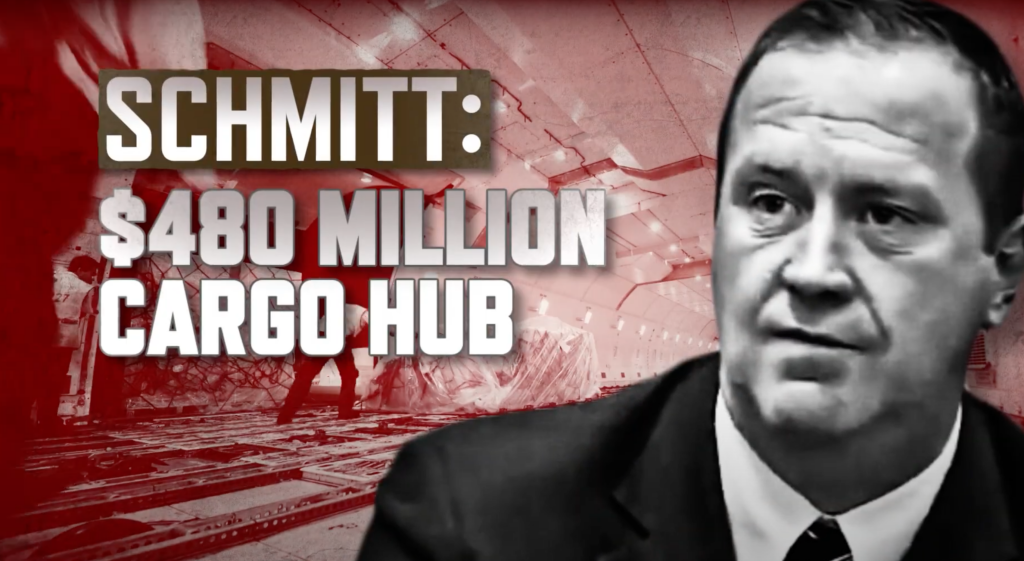 An ad attacking Eric Schmitt will air during the Olympics opening ceremony on Friday night. // Screenshot of Team PAC ad

Attorney General Eric Schmitt’s record on China is once again coming under fire, with a political action committee supporting one of his rivals in the GOP Senate primary launching an attack ad during the opening ceremony of the Beijing Olympics.

Entitled “Mao Money,” the 30-second ad highlights Schmitt’s efforts in 2011 to enact a $480 million tax credit program to turn St. Louis into a hub for freight flown between China and the Midwest. It also points to his vote in favor of a 2013 bill that made it possible for a Chinese food processing conglomerate to purchase Smithfield Foods and its 40,000 acres of Missouri farmland.

“How did China get so powerful?” the narrator of the ad says. “Friends like Eric Schmitt.”

China has become a key flashpoint in the GOP U.S. Senate primary, with all six major candidates jockeying for position in a party that has adopted former President Donald Trump’s hard line against China as gospel.

In September, Greitens criticized Schmitt’s support of the China hub and foreign land ownership bills in an interview with the right-wing conspiracy website Breitbart.

Schmitt fired back by slamming Greitens for a trip to China as governor where he sat for a 15-minute interview with a television station controlled by the propaganda department of the Chinese Communist Party.

Two months later, another Republican vying for the Senate nomination — U.S. Rep. Billy Long — joined the fracas, saying Schmitt “wants to act like he’s tough on China, but when he was in a position of power to cast a vote, he was a China softie.”

Schmitt’s campaign spokeswoman, Charli Huddleston, called the attack ad “desperate” and proof that Schmitt is the frontrunner in the Senate primary.  She again pointed to Greitens’ 2017 trade mission to China, here she says he “cozied up to the Bank of China as governor of Missouri to give away American jobs, appeared on Chinese State TV and failed to defend President Trump.”

Not to be outdone, a PAC supporting Schmitt called Save Missouri Values, put out its own attack ad targeting Greitens’ China trip.

Both ads conclude with “good for China, bad for Missouri.”

A recent poll conducted for the political newsletter Missouri Scout found Greitens continuing to lead in the crowded GOP primary. The former governor garnered 28%, followed by Schmitt with 23% and U.S. Rep. Vicky Hartzler with 19%. The other candidates didn’t break into double digits, and 17% were undecided.

Schmitt served in the Missouri Senate for eight years before being elected state treasurer in 2016. He was appointed to replace Josh Hawley as attorney general following Hawley’s victory in the 2018 U.S. Senate race, and he won a full term of his own in 2020.

Greitens was elected governor in 2016 and was forced to resign in 2018 to avoid impeachment and settle felony charges against him. He had been accused of stealing from a veterans charity and of myriad campaign finance violations.

But the most serious accusation involved violent sexual misconduct during a 2015 affair, including allegations he led a woman down to his basement, taped her hands to pull-up rings, blindfolded her, spit water into her mouth, ripped open her shirt, pulled down her pants and took a photo without her consent.