Premiere: The Guillotine Choir’s ‘In the Daylight’ 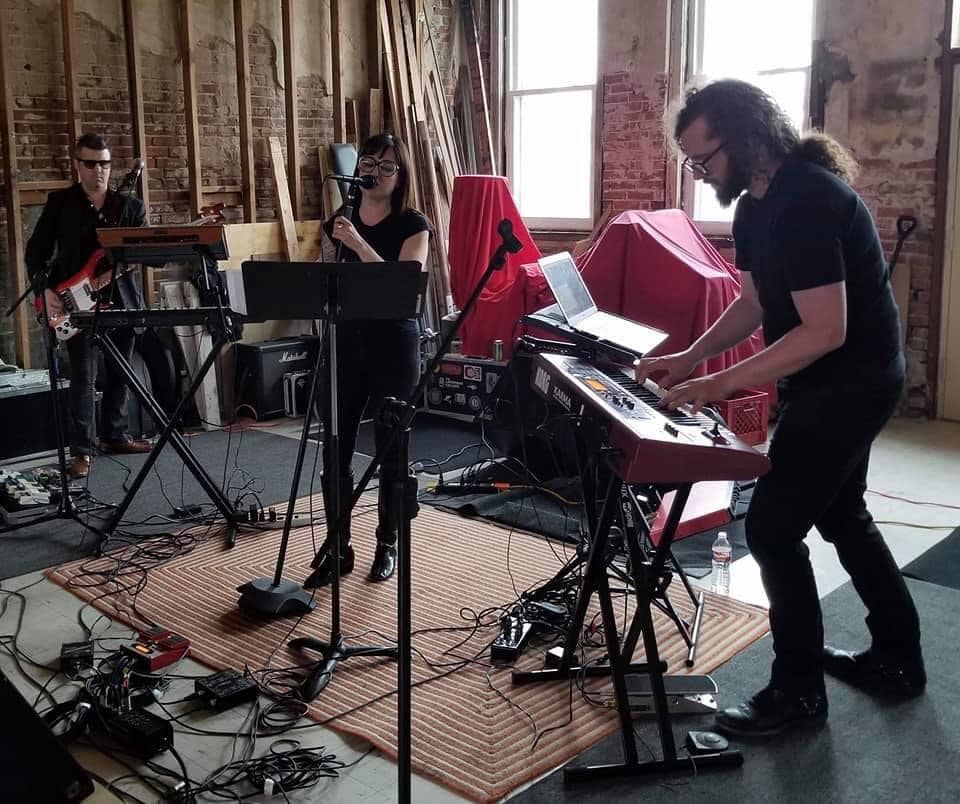 Kansas City’s The Guillotine Choir features the Philistines’ Cody Wyoming and Kimmie Queen, along with Justin Muschinske, making music which is not just dance-worthy electronic rock, but political, as well. Despite only playing a handful of shows since their debut in October of 2018, the band’s sound is fully formed, and spans the width and breadth of gothy dance sounds, taking just as much from Goldfrapp as they do Joy Division.

We’re pleased as punch to debut the band’s second single, “In the Daylight,” on Bastille Day. The timing is not a coincidence, and while you take a listen to their latest track, you can read our conversation with the Guillotine Choir about their evolution.

The Pitch: Where did the Guillotine Choir spring from?

Cody Wyoming: I had bought an analog synthesizer, and been messing with it for a little bit. Then on election night 2016, after Philistines practice, the other members had gone home, Kimmie and I decided we couldn’t bear to watch the results, so we stayed in the studio all night, messing around with the machines and talking about how worried we were and angry about the possible future, and ended up writing a few things that be the seeds of what the GC would become

We started doing it more often, and quickly realized that neither of us were a good enough drum programmer. So I started asking around. Then one night at an after party from a show at the Record Bar I ran into Justin Muschinske, and so I told him about it and he said “I know how to program drums”. And thankfully he remembered the conversation, because I was reeeeally celebrating, and I likely wouldn’t have. And then we just hit it off immediately at our first get together and we were off and running

I love the fact that rockers are starting to embrace the sounds of the dance floor again.

Kimmie Queen: I’ve always been a rock-n-roller and a dance music lover. And I was a Disco Child.

Cody: And we both kinda came of age in the New Wave/Post Punk scene of the ’80s, so we’ve always had an affinity for that kind of thing

Releasing a song like this on Bastille Day is definitely meant to send a message. You all haven’t been shy about using the band’s Facebook page for political purposes. Was that an outgrowth of the times, or has it developed organically?

Cody: Well, once we decided we were a band there was no question that we wanted to be overtly political. Especially considering the circumstances of our conception. It was literally born as an expression of opposition to the fascist now sitting in the White House. Our other projects have never been quiet about politics and social issues. But we wanted to address them more directly. We want there to be no mistake about where we’re coming from.

Kimmie: I cant think of a better way to express myself about this shit. So that I don’t go crazy, I have to do something. I need this band.

There’s that apocryphal Emma Goldman quote, “If I can’t dance I don’t want to be in your revolution.” While it’s a summary of a story she once told, rather than an actual thing she said, it’s incredibly applicable to the Guillotine Choir. How do you feel dance music spreads a revolutionary message?

Kimmie: I’m with her.

Cody: Dance music was always one of the biggest factors in social change at least in the 20th century. Jazz, and later Rock and Roll music and the people who played it, and the places they were allowed to play it, became powerful players in desegregation and the civil rights movement. Black kids and white kids dancing together really did change shit. But also, for me, I don’t just want to preach. I want people to have a good time. And maybe find a place to channel some of their rage in a positive way. Out on the floor.

Kimmie: Dancing changes peoples hearts and minds. It literally and figuratively removes blockages and connects to your soul and other peoples souls and you can feel how you’re more connected to other people.

Cody: Free your mind and your ass will follow.

Are these songs working toward something? Lyrically, it seems as though there’s this increasing sense of menace and confrontational attitude.

Kimmie: I’m trying to express my anxiety about the state of things, on What tomorrow Brings.

Justin Muschinske: And “In the Daylight” is certainly a little more aggressive in its approach.

Kimmie: This is not a good time for people right now. And we want to declare that we’re with the people who are rising up. They’re sonic expressions of the times and reactions to our world. They’re not exactly not necessarily leading somewhere

Cody: The menace is intentional. Because we’re pissed. I don’t about you, but I spend way too much of my day, just absolutely enraged at the multitude of horrors we’re witnessing. And so, yeah it is absolutely confrontational. At least to the establishment

What are you doing to handle the frustration which comes with not being able to record all these songs as soon as you’d like?

Kimmie: That’s actually one of the wonderful things about this band.

Justin: We’ve been fortunate to be able to be adapt. This band was born adapting we can do it again. This project was already so much different than anything any of us had done before, So we’ve constantly been learning what to do and how to do it.

Cody: And with the way technology is now, we can still do a lot on our own and work independently and show each other later what we’ve been doing. So if we’re unable to be in the same room, we can still get a lot done.

Kimmie: The nature of this band is to adapt to change. We don’t have a lot of rules.

Justin: Except no guitar.

Cody: And no love songs.

Kimmie: And no parkin’ baby, no parking on the dance floor.

The Psychedelic Furs' Tim Butler on Made of Rain, the band's first LP in nearly 30 years