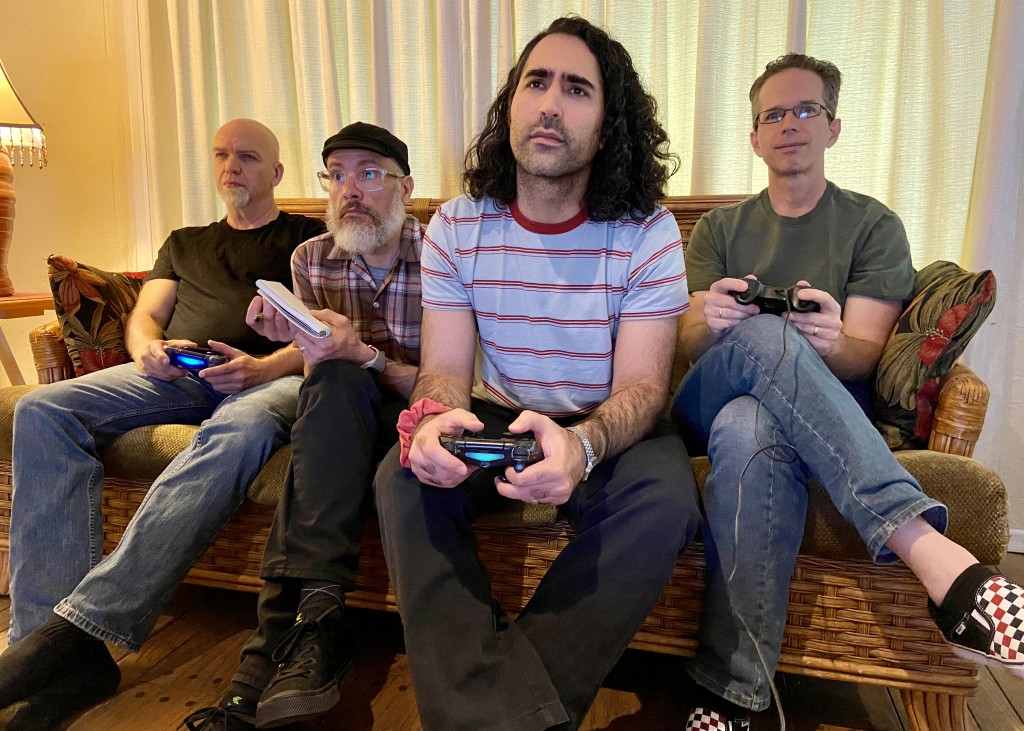 The music of St. Louis band Soft Crisis’ debut EP, I’ll Stop Now, is described by their publicist as “relatable, angsty, and occasionally intricate, but with the maturity and experience of old guys who have lived college through rock.”

The EP and the music of Soft Crisis is, at heart, indie rock which recalls the time before indie, when everything from Neutral Milk Hotel to the Replacements fell under the rubric of “college rock.”

The singles collection is exactly the sort of thing a new KJHK DJ and their parents could readily fall in love with, and we’re pretty excited that we get to premiere a video from I’ll Stop Now to celebrate its release today.

Additionally, we hopped on the phone with the band’s guitarist and vocalist, Reshad Staitieh, to talk about how the band came together, along with his ties to Kansas City.

The Pitch: What was the process for Soft Crisis in putting together the early singles and now, this EP?

Reshad Staitieh: We got together under strange circumstances, pretty early on in the pandemic. We had all had different projects in the works at the moment and then, when the world shut down, I pretty much just started writing what I thought was gonna be a solo project. I got several songs together and I just kept thinking, you know, “I’ve done the solo project thing and it just wasn’t for me.” I really missed working with people and connecting with folks.

What happened is I had been working with John [Hardecke, drums]–helping him out, just kind of mixing some of the tracks he’d been doing for a different thing. I knew he was set up to record drums at home and he’s just an amazing drummer so I thought, “I’ll just send these tracks to him.” They were just really raw and John sent me back some demos. I think I sent him four songs total in that first round in April or May, 2020 and he sent me back some tunes and I was just like, “Yeah, this is it.”

He happened to be working with a bassist at the time and they had played music together a long time ago named Garth [Jenkins]. John just sent the tracks on to Garth. Garth put down these really melodic bass parts. It was just missing that lead guitar component. I’d been working with Eric [Seaver]. We played in other bands together and I just sent it to him.

It was funny, ’cause none of us were really set up to do the whole home recording thing. I mean, I was, and John was, but it wasn’t something that we all had that same language at the time. Eric wound up kind of learning how to do a lot of the at-home recording and just started tracking stuff. We wound up with 10 songs in just a matter of months. They were all home-produced and they were all produced in isolation.

I’d never even met Garth at the time, but it was revealed pretty early on part that actually John and Eric and Garth had all been in a band together in the late ’80/early ’90s. We started amassing material and what happened is, we really liked how it was sounding just on our own computers, but we kind of thought, “When things open up again, let’s get in the studio and see what happens.”

It took over a year from those first recordings for us to actually get together in the studio. We started rehearsing only after we had gotten studio time locked up. We went into the studio maybe after five rehearsals in-person and we picked our favorite tunes from this huge library. At that point we had 15 or 16 songs we’d written and we went into the studio and picked our favorite handful.

That was where we were just like, ‘We haven’t even been able to play shows. No one knows who we are.” We all have different band history and stuff, but we wanted just to try to build something up from nothing. We weren’t even sure if we would ever get to play live again, to be honest, especially when we went to the studio because things were so crazy. So many venues had shut down in St. Louis and just all over and we kept wanting to be out in the world, but we didn’t know what it would look. Ultimately what happened is we just started dropping singles.

We put out our first single, “Fractions,” from that same recording session. We put that out in December and that started to generate some buzz. We put out “Become” about a month later and we accompanied that one with a music video, and then we waited a while, ’cause we were trying to figure out what we were gonna do about this EP.

That’s when we thought, “Let’s do one more single.” The music videos were a lot of fun for us to make. They just took a lot of time. We put out “Convinced” in June after we had set the date for the EP and done all of that stuff. The EP is kind of the last of those initial recording sessions. They’re all from the same session, but the EP is what’s left of all of our favorite songs from that first round of things.

You’re originally from the area. What’s your history in the local music scene?

I grew up in Kansas–actually, my parents still live out there–and I was all over the map in high school, doing solo stuff, playing in bands. I played quite a bit around town through high school. I think most of when I think about my Kansas music connection was just that really early on, I got exposed to some really great stuff. I remember the first time I saw Drakkar Sauna or I think about Split Lip Rayfield and all these bands that had a huge influence on me as a musician, to the point where when I was in Columbia for college and I played with a band and we started out playing out, those were the covers we were learning and playing live.

And so that’s kind of where a lot of my Kansas roots come in. Looking back, that Lawrence scene was a big part of my upbringing. I was also kind of the nerdy high school debater type. I was doing bands, but you know, one of my debate teachers [Jeff Brown] actually used to review music for the Pitch and so what would happen is, on these debate trips, we would just be in the van sometimes driving from Overland Park to Salina and just listening to music. He would just expose us to all sorts of stuff and so that’s honestly where a lot of my love for indie rock came from in general–just all the stuff he kept playing me. Everything felt like a little secret so that was, for me, what I think about when I think about my Kansas roots.

I had a number of bands I played with, but nothing too successful. I played in a band in high school and I remember getting on the Buzz at some point. That was a really big deal for us, but it was mainly about the connections for me and just playing around town. It’s really where I started to get my chops for live music and my love for that.

Soft Crisis’ I’ll Stop Now is available this Friday, September 3. The release party is in St. Louis at Off Broadway, with Finn’s Motel, Trauma Harness, and Electric Toothbrush Sisters. Details on that show here.