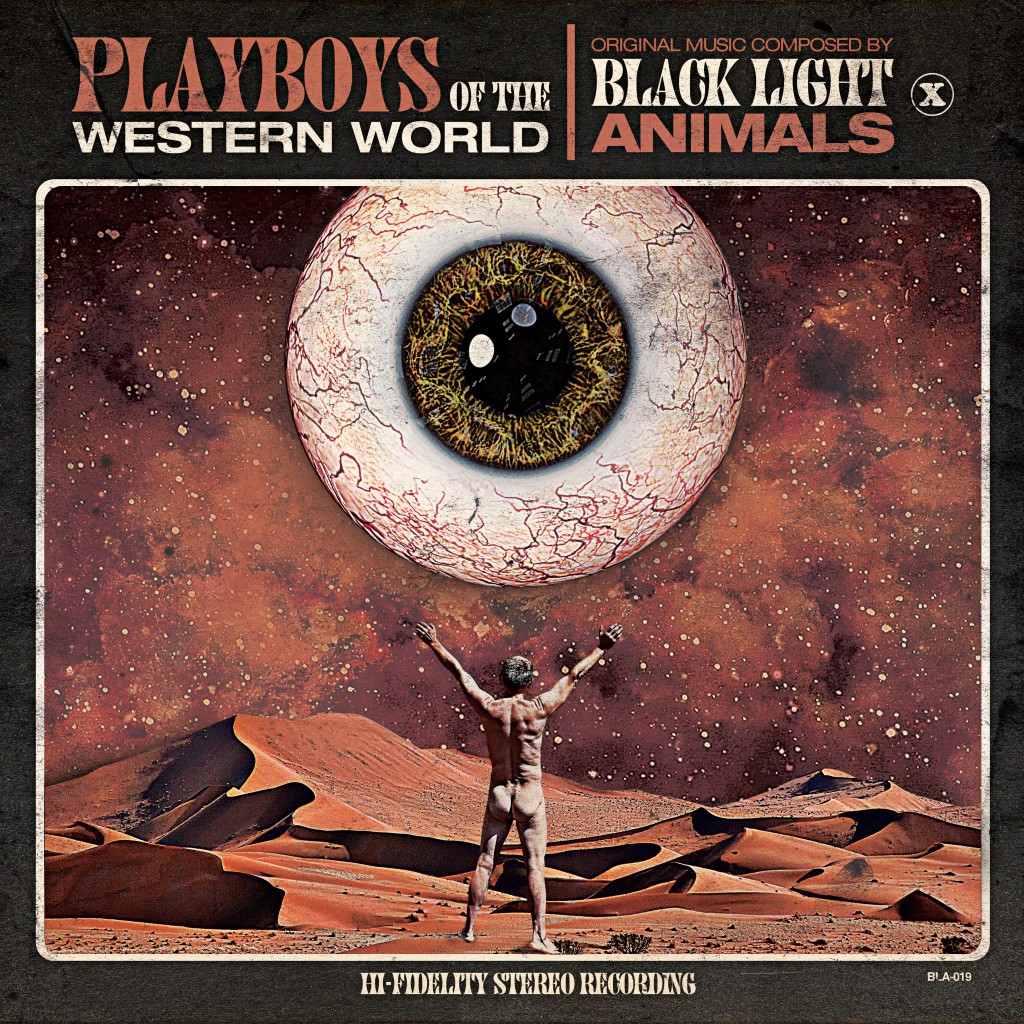 Last June, Kansas City’s garage rockers with the hearts of a soul band, Instant Karma, played their farewell show at the Record Bar. Since then, the members have played on as “the band formerly known as Instant Karma,” and made an appearance as Fever Dreams. Then, in May, the newly-retooled collective of Branden Moser, Cole Bales, Cody Calhoun, and Zach Harris announced they were now known as Black Light Animals, with the appearance of their first track, “Dark Fantasies,” on the third volume of the Kosmic City Friends compilation series.

That track is the first song on the band’s new LP, Playboys of the Western World, which officially releases this Friday, July 3. However, we have an exclusive premiere of the entire record, which is this massively psychedelic set of songs which draw equally from the ’70s soul revivalism of Adrian Younge and the weirder aspects of Italian film score composer Ennio Morricone, with a healthy dollop of lysergic swirl throughout. You can listen to the album while you read about the band’s top five influences below.

Cole Bales on why the name change:
“That name had stuck around since we played our first show for a high school talent show and just kind of never left. When we started writing this record,we realized that we needed a fresh identity from the band of (often obnoxious) 16-year olds playing blues covers. This record feels like it kind of exists in a universe of its own, and we needed to create a group that would fit into that universe. Black Light Animals is that. I picture us being the group that composed this fictional soundtrack to a film that got lost to time, and no one really knows anything about them past rumors they’ve heard, but chances are they’re probably old and washed up or have died in tragic scuba diving accidents.”

1) ’70s films and their soundtracks

We’ve always been a huge fan of Morricone and his work on all of the Leone films, but when we were making this record we started to explore his ’70s output for some obscure Italian horror films. We also discovered composers like Bruno Nicolai and Francois de Roubaix, who was this pioneer of home recording that died fairly young in a scuba diving accident of some sort (I’ve heard rumors of a shark attack).

Discovering those giallo films of Dario Argento and Mario Bava was also hugely important in developing the aesthetic and concept of the record. We came to think of it as the soundtrack to one of these lost B-rated horror films. A couple of great examples would be “Amour Sur Les Rails” off of the Daughters of Darkness soundtrack, or “Diabolik, Pt. 4” from Morricone’s Danger: Diabolik! score.

Leonard Cohen will always be one of our favorite lyricists. He could take a simple theme and build such poetic lyrics around it. “A Singer Must Die” is a perfect example. Before every writing session, we always made it a point to listen to Cohen and absorb as much of that influence as possible.

3) David Bowie – Ziggy Stardust and the Spiders from Mars

I’m sure this album has influenced just about every musician who has ever heard it since it was released, but we were a little late jumping on the Bowie Bandwagon. This is a perfect album. Amazing huge glam rock riffs juxtaposed with beautiful ballads. Bowie in general, and his chameleon-like nature, never getting too comfortable with one character before shedding his skin and moving on, is a huge influence on the band aesthetically and musically.

“The Tigress of Cremona,” Mina just embodies cool. She was this Italian pop star who broke every notion of what was considered proper etiquette for a woman in the public eye at the time, and ended up being this symbol of liberation. Studio Uno is a recording of a set she did for an Italian Saturday TV show of the same name that just has these huge, bombastic arrangements that compliment her huge, bombastic voice. The arrangements in particular were a huge influence on this record, particularly on “A Ballad.” Honorable mention in this category goes to Nancy Sinatra & Lee Hazelwood, and Googoosh, both of whom were also instrumental in influencing this record.

This may be another obvious one, but hey, you can’t get away from the influence of The Beatles on modern music. Their thumbprint is literally on everything that has come out in the last 50 years. Specifically late period Beatles influenced the background vocals and production on this record, and our drummer Zach is hugely influenced by Ringo Starr, one of the most underrated drummers in modern music. He consistently came up with these unusual beats that were never flashy, and perfectly served the groove of the song. Also, I know we are going over our limit here, but the influence of both hip hop and soul music can’t be understated in everything we do!

In addition to the band, Playboys of the Western World also features Chris Hazelton on piano, Alyssa Bell on viola, and Matt Bennett on violin, with cover art by Josh Wilkinson.

You can pre-order Playboys of the Western World ahead of its Friday, July 3, release on Bandcamp and receive both “Dark Fantasies” and “Halo” as instant downloads.