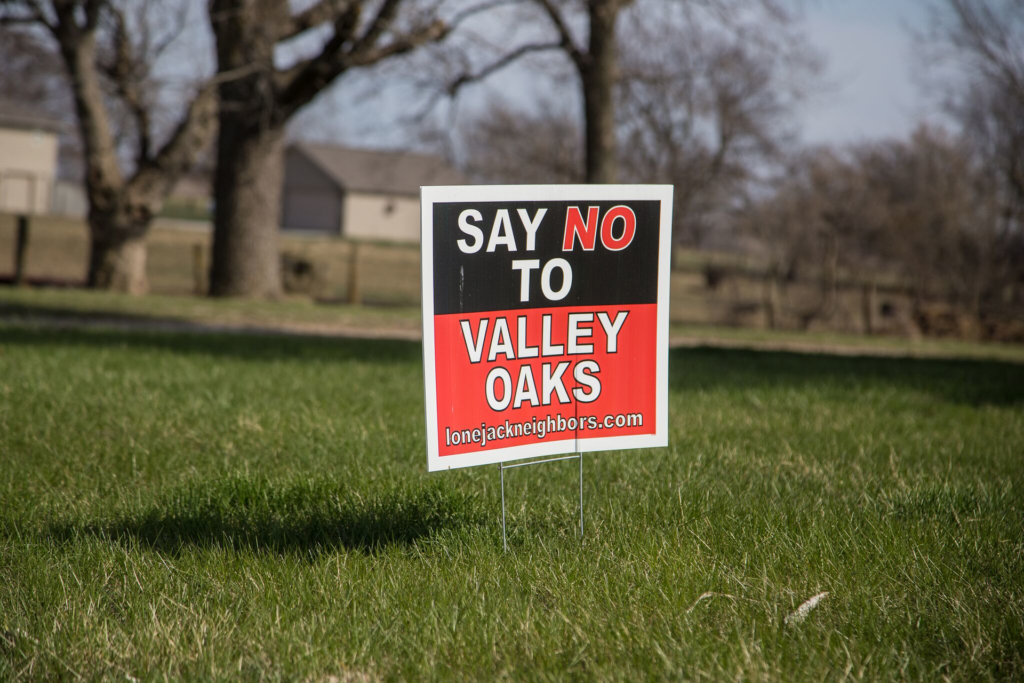 A state permit issued in June that allows the construction of a $30 million controversial cattle feeding operation near Powell Gardens is deficient and appears to violate state environmental standards, according to an order issued last week by the Missouri Administrative Hearing Commission.

The commission’s order “stays” the permit the Missouri Department of Natural Resources issued to Valley Oaks Steak Co., putting on hold the factory farm’s plans to expand the number of cattle to 6,999 from 900.

DNR did not respond to a request for comment.

There is one glaring problem with the stay for Valley Oaks, though.

Valley Oaks moved ahead with the project without the permit last summer because its owner was certain that DNR would grant it. DNR seldom if ever turns down such permits.

By the time DNR issued the permit June 15, David Ward, the owner and a Grain Valley real estate developer, had already sunk $20 million into the project and built four barns. According to the commission order, Valley Oaks had 1,900 cattle on its property in July, with plans to increase that number throughout the rest of the year.

Ward nor Valley Oaks representatives returned calls, but Ward said in a hearing in July that a stay could cause him to have to file bankruptcy.

The commission’s order said the “environmental protection interests outweigh Valley Oaks interests in accelerating its operations during the time in which this appeal is pending.”

Indeed, the commission said the environmental problems that could arise because of the expansion could result in “a significant potential for irreparable harm” and has scheduled a final hearing to be Aug. 27 in Jefferson City.

“We will vigorously present our evidence showing that the permit as improperly issued by DNR and, as reflected by the Commission’s order,” Davenport said in a separate Powell Gardens press release. “We believe that the Commission will agree.”

The stay is a major victory for Powell Gardens and the Lone Jack Neighbors for Responsible Agriculture, a group that quickly formed after residents learned last February that Valley Oaks was building barns for a factory farm.

More than 1,400 letters were written to DNR primarily opposing the factory farm, according to DNR.

Ward’s plans are unusual because these types of farms are usually located in low-population areas due to the stench from the huge number of confined animals as well as the potential of pollution they create and the insects they draw. Annually, the Valley Oaks confined cattle are estimated to produce 111,134 tons of manure and urine.

About 900 homes, many of them built in the last 10 years, lie within a three-mile radius of Valley Oaks. And at least a couple small farms adjacent to the Valley Oaks operation have belonged to the same families for more than 100 years.

After DNR issued the Valley Oaks permit in June, Powell Gardens, Ryan and Elizabeth Deich, who own a farm adjacent to the operation, and the Robert M. Chamness Trust appealed the case 12 days later to the commission.

Tabitha Schmidt, CEO and President of Powell Gardens, said the non profit organization “couldn’t be more thrilled with this result. It is just the first victory in our fight, but it validates the concerns of the Gardens and the community.”

“Sometimes the agency misinterprets its own regulations, exceeds its legal authority, and reaches conclusions that aren’t supported by data,” Davenport says. “Agency representatives are human and subject to political pressure and don’t always make legally defensive decisions, which is why there’s an appeals process.”

According to the commission’s order, Ward already has invested $20 million in the confined animal feeding operation that included building four large open-air barns with 2.3 feet high walls and two manure storage sheds. Ward plans to invest another $10 million to construct two more barn. In addition, Valley Oaks has received a loan from FCS Financial for the construction.

Valley Oaks has entered into a $55 million five-year contract with Scavuzzo’s Food Delivery service in Kansas.

The commission noted that if it issues a stay, Ward’s “costs for debt service and utilities will not cease and Valley Oaks may incur additional costs for depopulating the (confined animal feeding operation), and 47 employees may be laid off.”

But the commission said the stay was a measure to preserve the “status quo,” and “temporarily return Valley Oaks to an unpermitted facility” with a limit of only up to 1,000 cattle.

“The lion’s share of of the costs” occured before DNR issued the permit on June 15, the commission said.

“We conclude that while a stay may result in financial harm to Valley Oaks, the bulk of that harm is the result of Ward’s own actions in anticipation of receiving a permit, and as a result, does not outweigh the other factors in our analysis,” the commission said.

Some of the criticisms of DNR’s permit include:

The commission’s order also noted that Ward had past environmental violations included pleading guilty to falsifying a form to the EPA regarding a stormwater permit and his company was fined more than $90,000. In addition, Ward Investments paid a civil penalty of $13,500 for violations of the Missouri Clean Water Law.