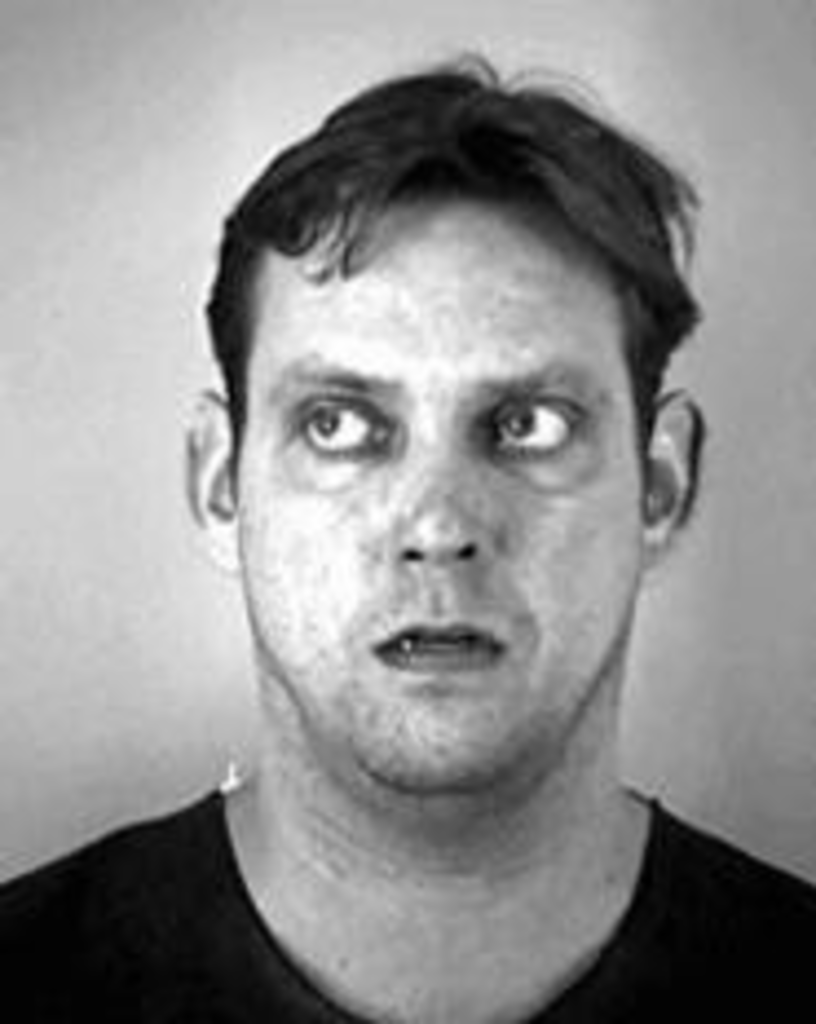 On a snowy night in January, Fric & Frac on 39th Street was packed with an even bigger crowd than usual. In the smoky bar, people drank beer, laughed and loaded up on barbecued chicken, salad and brownies from a buffet.

The festive event wasn’t a celebration, though.

It was a benefit for John H. Gronemeyer, a longtime Fric & Frac employee known by many regulars along 39th Street’s restaurant row.

On January 11, Jackson County Prosecutor Michael Sanders charged Gronemeyer with first-degree murder and armed criminal action in the slaying of David Houk. A judge set his bond at $250,000. Gronemeyer’s friends were partying at Fric & Frac to help get him out of the Jackson County Jail, where he’s been held since his arrest on January 10.

He’s “a gentle giant,” they say, not a murderer.

Around 150 people attended Gronemeyer’s benefit. At a table by the door, Polaroid snapshots of grinning revelers poked from an envelope marked “John’s party pics,” headed for the county jail. Gronemeyer’s friends huddled over letters he’d sent them from his cell.

“I feel like the luckiest guy,” Gronemeyer wrote. “You all give me strength to move on and get this over. It will take time, I know, but I have faith.”

“They found a dead body in his apartment. That’s bad,” admitted Terry Curtis, who donated $1,500 to Gronemeyer’s bond fund soon after his friend of nine years was arrested.

“I don’t believe John is even capable [of murder], and if he did it, there had to be a damn good reason,” Curtis said. “They’ll have to prove it to me.”

Around the Christmas holidays, Gronemeyer let Houk, a regular at Fric & Frac, live at his apartment for a few weeks while Gronemeyer visited his parents in Florida.

Gronemeyer returned to Kansas City the second week in January, his friends told the Pitch. On January 10, he worked the day shift at Fric & Frac, then headed to Woodside Tennis and Health Club to work out. That night, Gronemeyer walked into Mr. Z’s, a convenience store at 39th Street and Wyoming, just before closing time.

“He told me, ‘I have to call the police. I have a dead body in my apartment,'” recalls Robert Roudebush, the clerk on duty that night at Mr. Z’s. Gronemeyer couldn’t remember his home address, says Roudebush, who has known Gronemeyer for years and considers him a friend. Roudebush called the police and waited with Gronemeyer.

Gronemeyer led officers to his apartment, where Houk’s body lay on the blood-spattered bathroom floor. He’d been beaten to death with a hammer.

According to a police statement, Gronemeyer originally told officers that he had found an unidentified dead man in his bathroom. After further questioning that night, though, his story changed.

According to court records, Gronemeyer told a detective that the two men had been drinking. Gronemeyer, who stands 6-feet-4-inches tall and weighs about 235 pounds, told police that Houk — who was 5-feet-8 and weighed about 160 pounds — had made sexual advances toward him.

“The victim removed his clothing and attempted to rape the suspect,” wrote a detective who interrogated Gronemeyer. “The victim continually grabbed at his genitals and requested he be allowed to perform oral sex on the suspect.”

Gronemeyer told the police he picked up a hammer and hit Houk “three or four” times. “The victim fell to the floor, and the suspect began to clean up the blood,” wrote the detective. “The suspect then left the apartment, leaving the victim on the bathroom floor.”

Gronemeyer’s friends describe him as a former Eagle Scout who avoided violence. He drank, several people told the Pitch, but he wasn’t a mean drunk.

“I love the man. I never saw an angry hair on his body,” says Manny Curiel, who played tennis with Gronemeyer. Curiel had once seen Gronemeyer give ten dollars to a Woodside janitor on the man’s birthday. “I had a strong feeling he had a good heart and a good soul.” Now he’s not sure what to think.

David Houk had friends as well. They say he was a passive man who drank a lot. Houk once worked as a stagehand around town, but in the last few years, he’d moved around, flopping on friends’ couches until they asked him to move on.

Houk spent most afternoons sipping bourbon and Coke at Missie B’s, a gay bar at 39th Street and Southwest Trafficway, while his clothes tumbled in Laundromat dryers down the street. Houk was heterosexual but friendly with gays, says Brett Halsey, a bartender at Missie B’s. Halsey used to joke with Houk, telling him he’d have to sit “in the hetero section” of the gay bar.

Houk was also a regular patron at Kenny’s News Room on Broadway, where bartender Wendy Thomason remembers him as “a good guy” who butted into others’ conversations when he was drunk but was essentially harmless. Thomason has known both Gronemeyer and Houk for twenty years.

“[Gronemeyer] would get shit-faced, but he was like a big teddy bear,” Thomason says. “John was just a good guy, and David was, too.”

At Gronemeyer’s arraignment on February 12, his lawyer, Kevin Regan, asked for a bond reduction. About thirty of Gronemeyer’s friends filled the courtroom.

John Enenbach, an attorney and former Jackson County assistant prosecutor who played tennis with Gronemeyer at Woodside, argued that Gronemeyer wouldn’t pose a flight risk if he were freed on bail. Nor would he be a danger to anyone, Enenbach told the judge.

“If I tell you that he’s acknowledged responsibility for causing the death of this victim, and that he did it by hitting this victim eight to twelve times with a hammer and, after he did that, hid all of the victim’s clothes, and he tried to clean up the crime scene, does that change the opinion that he wouldn’t be a danger to the community?” asked Assistant Prosecutor David Fry.

“No, it certainly would not,” Enenbach replied.

Another of Gronemeyer’s friends, Daniel Brady, told the court that Gronemeyer would be welcome in his home anytime, despite the allegations.

“He was under sexual attack, and because of that, I think any reasonable man or woman would defend themselves,” Brady testified.

“If somebody beats an individual with a hammer eight to twelve times, is that an excuse, that is, the sexual contact or sexual aggressiveness, an excuse for that act?” Fry asked.

“Under the circumstances, it must have been,” Brady said. “Because I know John is not a violent person.”

Mark Houk, David’s brother, had a hard time listening to the testimony. Gronemeyer’s friends might feel differently if they’d seen his dead brother’s body or felt his crushed skull, he says.

“It was like John’s fan club was there,” Mark Houk says. “They were in complete denial. Every one of them got up there and made him out to be a saint that would never do anything violent.”

Gronemeyer’s case has none of the elements of first-degree murder, Regan insists. If the case goes to trial, a jury will likely be allowed to consider the lesser charges of manslaughter or second-degree murder, he says. He declined to comment on what defense he plans to present.

“Whatever happened happened in the heat of passion, without premeditation or deliberation,” Regan says. “When the facts are known of what exactly went on during that incident, there will not be a showing that murder in the first degree is what occurred.”

If Gronemeyer is convicted of first-degree murder, he will face life in prison without parole, Fry says.

Judge Kelly J. Moorhouse denied Regan’s request to reduce Gronemeyer’s bond. The January benefit at Fric & Frac brought in $4,000. So far, Gronemeyer’s supporters have raised about $15,000, in case the bond is lowered. If it isn’t, the money will go toward Gronemeyer’s legal fees. No trial date has been set.

Manny Curiel still believes his friend is a “man of peace.”

“You know what I could see John doing?” Curiel told the Pitch. “Being a Buddhist monk. He had that look, like everything was all right with him.”

Not all of Gronemeyer’s friends are eager to let him off the hook, though. If Gronemeyer killed Houk, says Thomason, the bartender from Kenny’s News Room, “He’s got to pay the piper.”

“[The benefit] appalled me,” Thomason says. “It’s a tragedy for both families. There are two lives gone here. One is not breathing, and one is behind bars.”