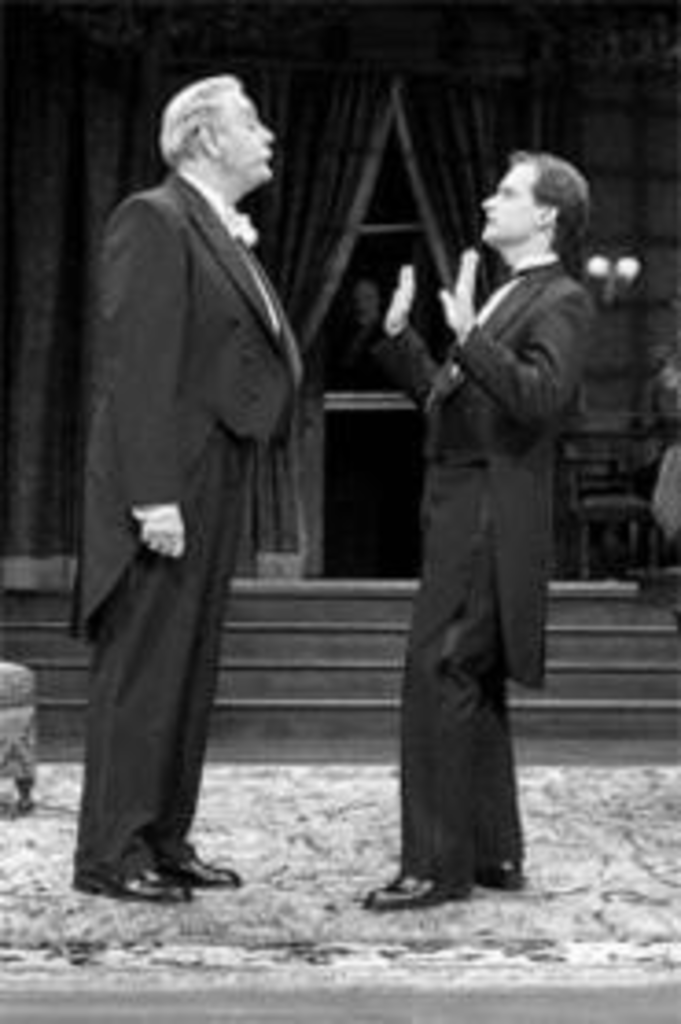 During the intermission of the Kansas City Repertory Theatre’s The Voysey Inheritance, some audience members were overheard expressing fits of boredom. A quartet of middle-aged matrons in front of me looked at each other like, “Are you thinking what I’m thinking?” And one college-age guy even asked his friends, “Did you hear me snoring?”

Maybe they had mentally checked out in the first 15 minutes, when this David Mamet adaptation of a 100-year-old drama flirts with irrelevance, its characters sipping brandy or doing needlepoint and talking with clipped British accents. Even the cover of the program seems quaint — it looks like an Arrow shirt ad from the 1920s.

Or maybe the young guy was missing the Mamet he swears he knows, the one who punctuates every tenth sentence with variations of the f-word. In the new Broadway revival of his Glengarry Glen Ross, it’s used more than 150 times and with a lot of zip and eloquence. Here, a lone curse word is uttered late in the second act.

It’s a shame that the play lost them, however, because after some initial torpor, The Voysey Inheritance turns into a darkly funny show about corporate greed in a time nearly a century before the likes of Enron or Tyco.

Harley Granville Barker, the original author, premiered the play in 1905, when he was all of 28. This staging uses a shorter, loving adaptation by Mamet, who adores the play. Mamet’s spry new version — cut from three hours to two — premiered at San Francisco’s American Conservatory Theatre earlier this spring with the same cast that is performing it at the Rep. One of the actors in the show told me that untrained ears won’t necessarily know which lines are Barker’s and which are Mamet’s. But what’s certain is that the production is the best the Kansas City Rep has staged this season.

Things don’t start out so promising, though. When Alice (Rene Augesen), a sassy prefeminist, and her beau, Edward Voysey (Anthony Fusco), steal away from an offstage dinner party to discuss their engagement, the stiff direction from Carey Ferloff is worrisome. (The night I saw it, I was afraid I’d be stuck for two hours with a plate of cold hors d’oeuvres.) But things begin to crackle when Mr. Voysey (the delightfully pompous Ken Ruta), the family patriarch, reveals to Edward that their privilege has been deceptively earned. For at least two generations, the Voyseys have used others’ money to make rash speculations that have seldom paid off. Their assets aren’t nearly as deep as everyone assumes.

The scene is so alive because it’s the wholly unethical Mr. Voysey who entertains us and not his upright, uptight son, who insists that the family come clean. Edward comes off as a decent but boring person; he’s awfully smug in his moral superiority. One assumes that the biting comedy in their interaction — as when Mr. Voysey says to no one in particular, “Why do children always expect the worst of their parents?” — comes from Mamet’s proven facility for writing funny monsters in fine threads.

Mr. Voysey dies, and Edward feels compelled to reveal to his siblings, his mother, and his father’s business associates just how dirty the Voysey inheritance really is. It’s enjoyable to watch their panic at the thought of having to live below their means. (Public disgrace is discussed, too, but it’s not nearly as big a concern.) And we discover that Mrs. Voysey (Barbara Marsh Oliver) has been aware of — and comfortably resigned to — the situation for years. When she plops down in an easy chair and kicks her feet up on the ottoman, she may as well say, “Tell me something I don’t know.”

Everyone spends the rest of the play trying to persuade Edward to keep his mouth shut. Among his antagonists are the groveling Mr. Peacey (a weasel-like Mark Robbins), who demands the Christmas bonus with which the late Mr. Voysey annually lined his purse, and George Booth (Gary Neal Johnson), who vows to cash in on the stockpile that he refuses to believe has been depleted. Interestingly, Johnson is the local actor who has played Ebenezer Scrooge in the last several KC Rep productions of A Christmas Carol. Though it could be said that Booth and Scrooge come from the same mold, Johnson creates an original sketch of a man’s insatiable appetite for money.

As to that cursing: The Voysey Inheritance contains one sentence with a bad word. And the prediction I’d heard came true — I couldn’t decide if Mamet or Barker had put it there. But both should get credit for a winning play.