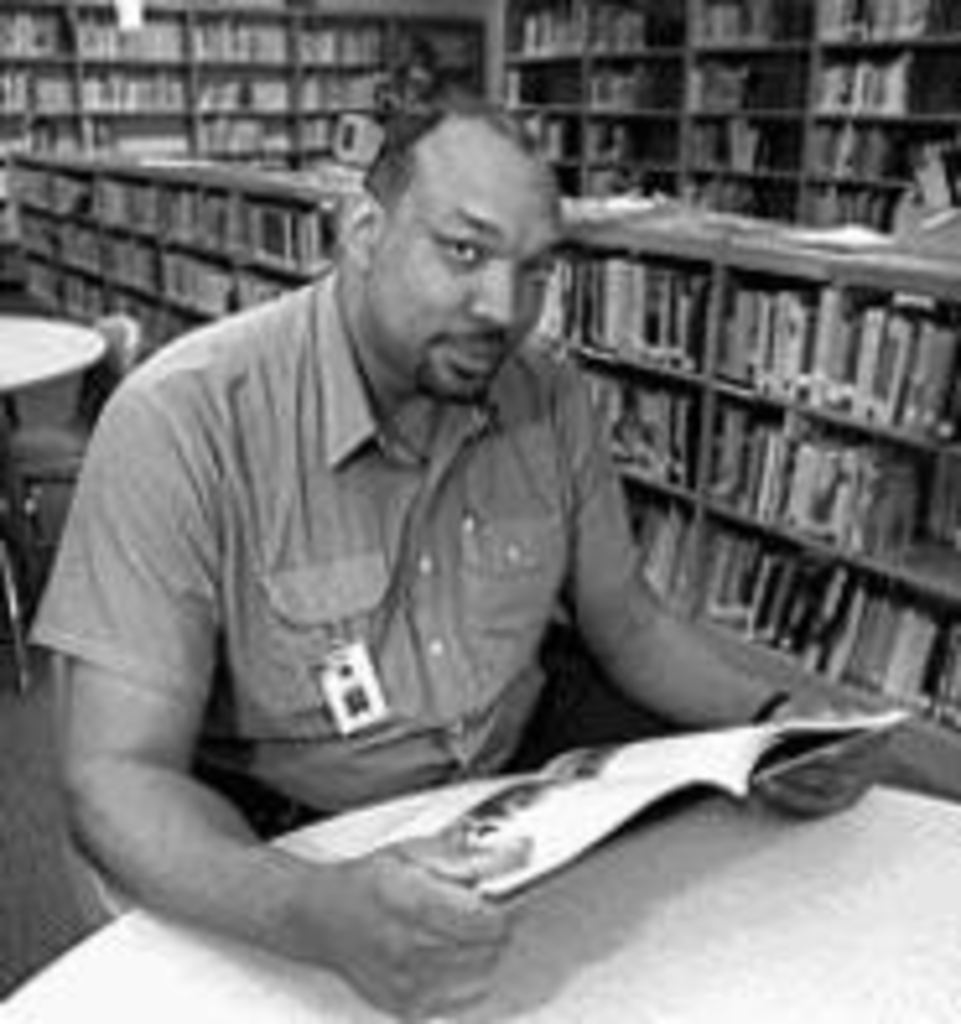 Kevin Ross, a Wyandotte High School graduate, is the most famous basketball player ever to suit up for Creighton University. President Reagan once warmly greeted him at the White House. He traveled the country as a celebrity, speaking at schools and in front of youth groups. His fame, though, has nothing to do with his on-court skills.

Ross’ twenty-year class reunion is coming up later this year. It’s a reunion not of his former teammates at Creighton but of classmates from Marva Collins’ Westside Preparatory School, in Chicago. It was there that then-23-year-old Kevin Ross sat with grammar-school students and finally learned how to read and write in 1982.

Ross’ 6-foot-9-inch, 43-year-old frame is backlit by fading April sunlight as he walks the tiled corridors of Coronado Middle School in Kansas City, Kansas. He is a night-shift custodian at the school where he once strolled the halls as a young basketball star. It has been more than twenty years since he was a muscular post player at Creighton who sported an Afro, rarely looked interviewers in the eye and barely spoke above a whisper to answer a question.

Ross extends his huge right hand and engulfs mine in greeting. “I’m always willing to do anything to help kids,” Ross says in a clear, confident tone. Ross’ story is not a pleasant one, but he hopes that by retelling it, he’ll make an impression on any child who thinks sports can substitute for an education.

Students are supposed to learn how to read in first or second grade, not sometime after college. Yet Ross spent twelve years in the Kansas City, Kansas, school district and did not learn how to read. As a high-school basketball star, Ross was rarely told to focus on academics. “I blame the coach I had in high school,” says Ross. “I thought he cared about me. But he cared more about winning.”

One math teacher stands out in Ross’ memory for demanding more of him than a jump shot. “He told me he didn’t care how good a basketball player I was,” Ross says. “He told me if I wanted to put this ball in the hoop, I was going to have to get this F up to a C. He said, ‘I don’t care how big you are. If you don’t show up in my class, you’re not going to get any grade.’ That’s why I remember him so well.

“If all the teachers would have been like Mr. Copeland….” Ross’ deep voice trails off as he looks down at his feet. He catches himself as a lump forms in his throat and his voice cracks with emotion. He unfolds his clenched palms and looks me in the eye, speaking again with confidence. “I was the type of kid that wanted to learn.”

According to Ross, KCK schools have changed greatly since he attended Coronado and Wyandotte High in the 1970s.

“There’s been a lot of rule changes around here because of me,” says Ross. “I’m not the kind of person that needs the credit, but I hear a lot of other people giving me credit.”

Heavily recruited by colleges nationwide, Ross accepted a scholarship from Creighton University. Ten years later, he would argue in court that the Omaha, Nebraska, college promised him extra academic help if he signed to play basketball there — aid the school didn’t deliver.

Still, he didn’t really know how badly he needed the help. “I thought I was okay until I got to college,” Ross recalls. “I thought college was like high school. And then when I got there and opened up their books, it was a whole different ballgame.”

Ross left the university reading at the level of a second grader. He enrolled in Marva Collins’ school shortly after, with Creighton footing the bill. His commitment won him praise from the president and poster-boy status for critics of U.S. collegiate-athletic scholarship programs. Anyone who saw the photos of Ross’ towering body crammed into a desk built for a nine-year-old will never forget it.

Nine months later, he was reading at the level of a college freshman. “The first book that Mrs. Collins gave me was Five Smooth Stones, by Ann Fairbairn,” Ross says. “The reason I remember it so well is because this book had 800 pages. I told her, ‘I can’t read this.’ She said, ‘That’s your problem. You can read this book. You just don’t think you can.’ I was very unsure of myself in college. The reason I talk the way I do now is because of Marva Collins. She told me, ‘You’re too big to be mumbling. You need to spit your words out and speak clearly.’ She taught me to be confident. Confidence brings that out of you.”

Confidence is a powerful attribute, especially in the molding of a child’s attitude toward life. But as a young student, Ross felt sure of himself only on the basketball court. As he sits in the commons area of Coronado now, his self-assurance shows in the way he articulates his thoughts. He has spent the past ten years cleaning classrooms. He wants more.

“This is not my dream job,” says an obviously embarrassed Ross. “I can’t predict how I’ll spend the next forty years of my life, but I hope I can go back to school and get my degree. That’s a dream that I have. I’d like to go to UMKC or somewhere around here. That’s something I would love to get done, because even though my job [as a custodian] is important, I would like to have a classroom of my own one day as a teacher.”

In 1989, Ross sued Creighton; he won a $30,000 settlement in 1992, though the school refused to admit any guilt for his illiteracy. He has enough college credits to allow him to teach part-time in KCK. He recently taught a Northwest Middle School class of sixth graders with behavior disorders. The class prepares students who have expressed antisocial behavior to re-enter mainstream classrooms. “I see a lot of kids who lack a lot of different things,” Ross says.

“Some kids, you’ve just got to show them that you care,” Ross says. “Sometimes I think adults need to talk to kids just like they are talking to another adult. I know the two aren’t on the same level, but what I mean is, you can’t say, ‘You dummy, don’t do this! Get your behind over here!’ You can’t talk down to kids. You’ve got to treat them like they’re something special. That’s what Mrs. Collins taught me. Any kid can learn if you just take the time to teach them. She loved to get the worst kid and turn him around. I’ve seen her do it.”