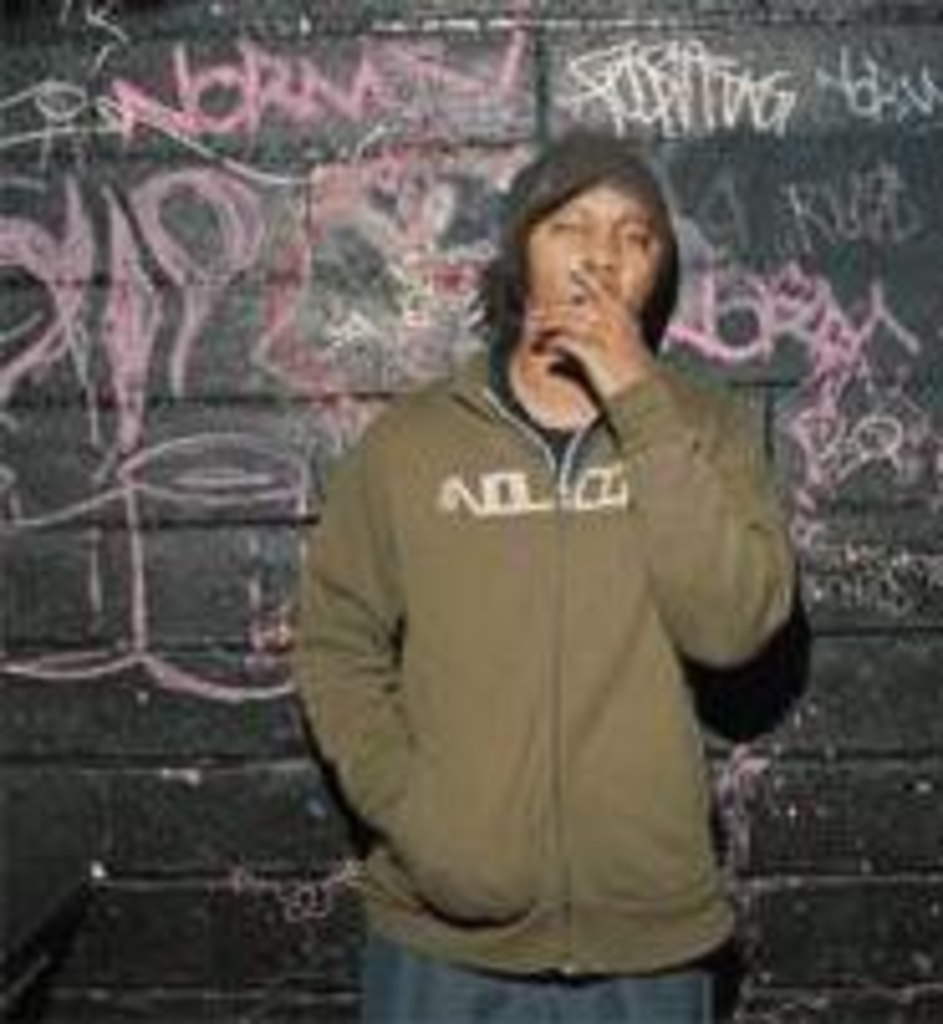 It sometimes seems like the last wall left standing in this era of increasingly genreless music. But the idea that black artists can rap but not rock still retains its peculiar power, and all the history to the contrary — from Ike Turner and Chuck Berry to Jimi Hendrix and Prince to Run-DMC and Mos Def — hasn’t eradicated it yet. In this hip-hop dominated era of “keeping it real,” in fact, it has resurfaced anew.

So the idea that the person who might finally put it to rest is a black kid from Minneapolis who used to draw jeers for his blue frohawk and get roughed up in the mosh pit, seems a trifle premature, at least. And the artist in question — Stefon Alexander, better-known simply as P.O.S. — hastens to agree. In fact, he’s explicit about rejecting the term “rap-rock” and all its lunkheaded, Limp Bizkit-esque connotations.

But the hip-hop on P.O.S.’s recentlyreleased second album, Audition, still finds a way to encompass punk attitude and guitars, with none of the bad aftertaste. And so the thought of its creator as a groundbreaking figure is crossing some people’s minds.

P.O.S. divulges a bit of industry scuttlebutt he overheard recently: “Someone said, and it’s not a direct quote, that ‘it’s a shame that he’s getting distribution this good right now, because he’s not gonna be able to put his stamp on history before people start biting his style.'”

The artist in question, on the other hand, finds the idea of himself stamping history “very sweet and incredibly hilarious.”

“I was brought up to enjoy what I’m doing, but not be on my own dick,” he says. And though his work does aim to break down musical barriers, it’s a low-budget crusade at the moment.

He’s speaking by phone from a San Diego hotel room — a luxury in which he and his touring partners seldom indulge. Despite signing two years ago to Rhymesayers, the label of Minneapolis hip-hop hero Slug, P.O.S. would rather keep crashing at friends’ houses on the road and bank the tour support for other uses. “We are the masters of the $3 budget day, no joke,” he says. “It would be really cool to go home and be able to pay my rent for six months.”

The crucial missing ingredient in any genre-defying black artist’s success story is black fans, which P.O.S. admits he’s still working hard to attract. “It depends on the region. It’s mostly white kids…. I’ve noticed there’s always between three and 10 black kids at the shows, which is cool.

“I realize I’m just a kid. I’m just a dude, man,” the 24-year-old jokes. “But it would be great if I could help get more black faces at the Warped Tour or at indie hip-hop shows. I mean, I wish everybody would just calm the fuck down. Music is music — and Minor Threat just happened to touch me a lot more than N.W.A. did.”

That fact, however, made adolescence in the Twin Cities a painful proposition. “Kids are cruel, y’know?” he sighs. Black students would sneer at his punk tonsure and tattoos, while white skinheads looked at him just as incredulously at hardcore shows. “I’d get elbowed in the face in the pit, on purpose, and these guys would be going, ‘What the fuck are you doing here?'”

The cost of survival was considerable; it’s little surprise to find that P.O.S.’s stage name is an acronym that originally stood for “Pissed-Off Stef.”

Meeting the band Fishbone when he was 15 changed Stefon Alexander’s life. The group’s pioneering fusion of rock, ska and soul pointed the way beyond the fast-and-loud hardcore that he loved almost exclusively. And talking to some black musicians who existed outside the urban norm made his own existence seem a little less solitary. “I watched those guys go apeshit, and it was a revelation, man,” he recalls. “And I doubt if they remember it, but I’m pretty sure they went out of their way to be nice to me that night.”

P.O.S. would eventually discover hip-hop and a few like-minded friends, who became part of a crew christened Doomtree — a name later applied to a record label and even a house in Minneapolis. One member of the posse, the rapper Sims, is on the current tour. Another member, Kai, has collaborated with P.O.S. in the hardcore band Building Better Bombs, which has completed a new album that Alexander describes excitedly as “incredibly brutal.”

It’s the way punk finds its way into P.O.S.’s hip-hop that has excited a growing number of listeners, however. His 2004 debut, Ipecac Neat, sampled Fugazi and Rancid, but Audition — which he considers his “real first album,” and is his Rhymesayers debut — is more aggressive still, with riff-heavy new tracks like “Yeah Right (Science, Science)” and guest vocals from the Hold Steady’s Craig Finn and Greg Attonito of Bouncing Souls, as well as Slug. Not a complete surprise from a guy who admits, “I have no interest in making people dance,” and has been known to begin shows with tunes by At The Drive-In.

He says that when he tried that trick while opening for Slug’s band Atmosphere last year, “People would look at me like I was absolutely fucking nuts.” That reaction has steadily lessened, he says, thanks in part to his own public-relations efforts.

Mindful of the effect the members of Fishbone had on him as an impressionable youth, P.O.S. makes himself available to fans while on tour. He even has a standing offer to thumb-wrestle all comers at the merch table; winners walk away with free gear.

And whether he changes the world or not, the once-lonely boy (who admits, almost shyly, “If you’ve got the mind for it, I think I make a really good friend”) is determined to take full advantage of the respect his art has finally won him.

“I’m doing the best I can to enjoy what I’m getting right now,” he says earnestly, “and treat it like I’m never gonna get it again.”