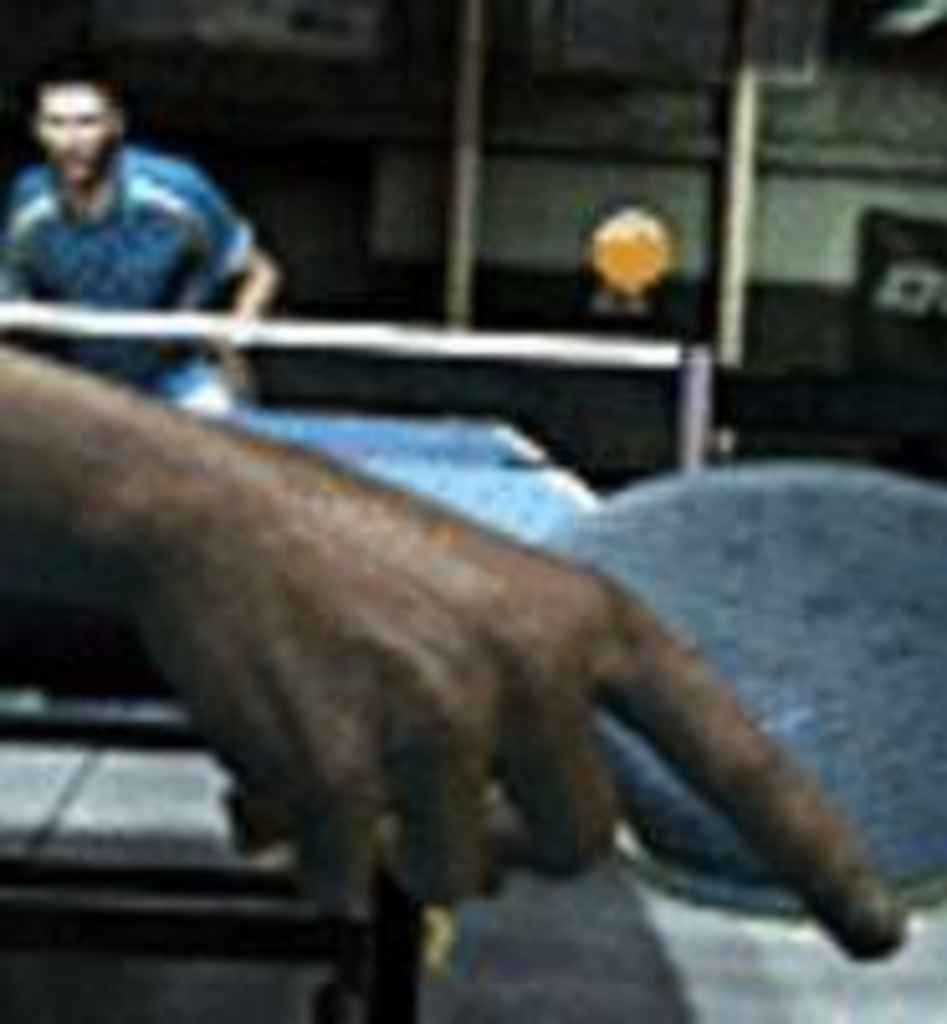 When Rockstar Games, the company behind the infamous Grand Theft Auto series, announced that it would be making a title for Xbox 360, gamers naturally envisioned a game featuring next-gen hookers.

But then Rockstar revealed that the game was actually going to be an elaborate Ping-Pong sim, and fanboys the world over responded with a collective WTF?

Sorry, virtual pimps, it’s true. Behold: Rockstar Games Presents Table Tennis. Even though the game has the distinct vibe of a pet project that only saw the light of day because of Rockstar’s big-name successes, it isn’t just Pong with a new coat of paint. Like the real deal, it’s fast, deep, and a helluva lot of fun — assuming you have a friend.

The format is simple: Pick a character and get to paddling. The game starts with a scant four selectable players, with seven more unlockable as you go (in a tragic missed opportunity, Forrest Gump is nowhere to be found).

While a few stand out as too powerful — most notably the Swede, Jesper, who might as well be a Viking thawed out of a block of ice and handed a paddle — the characters are mostly balanced, each with distinct strengths and weaknesses. Knowing those nuances becomes critical, because the seemingly simple game play is actually quite involved.

Players have a wide variety of weapons in their arsenal, from terrifying smashes that send the ball rocketing away like a bullet to soft returns that drop just over the net. But the meat of the game lies in mastering the different spins, which can make the ball ricochet in surprising directions. Balls in flight are faintly color-coded to indicate which way they’re spinning, but they move fast, so you’ll only have a fraction of a second to react.

In a clever bit of design, the game lets you know where you’re aiming via the controller’s vibration function. Aim too close to the edge of the table, and the controller vibrates softly; aim out of bounds, and a strong rumble warns you away. It works brilliantly, and it’s easier to get the hang of than it sounds.

The boys at Rockstar put Table Tennis together with the most old-school of design principles: Do one thing, and do it extremely well. The drawback to such single-mindedness is that there really isn’t much else here.

Other than some changes of clothes for each player and a few new venues, what you see is what you get. A few mini-games, like targeting empty cans — let alone a hidden beer-pong mode — would have been nice.

As a result, all the finely tuned game play in the world can’t make the single-player experience hold up to repeated play. Naturally, Xbox Live users will get some added mileage with the endless number of opponents lurking online, but Table Tennis is the sort of game that works best in trash-talk-filled grudge matches in your dorm room.

And if you’re still hung up on the fact that The House That GTA Built decided to bother with a Ping-Pong game, think of it this way: Who better to remake Pong — the title that invented gaming — than the company that redefined it?