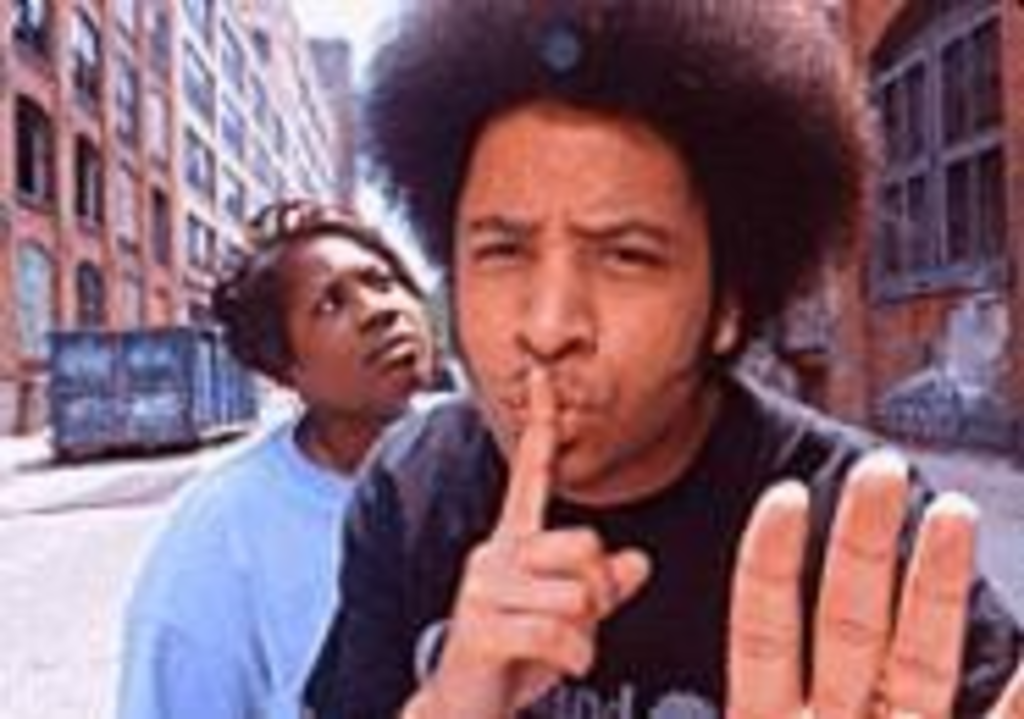 Raymond “Boots” Riley was dressing his daughter for school when he heard the news on the radio. Like most Americans, he was disturbed by reports that terrorists had attacked the World Trade Center and the Pentagon. But Riley didn’t jump on the patriotic bandwagon, purchase a made-in-China American flag and begin waving it frantically. “The American flag stands for slavery and oppression,” he says. “It’s the same flag they were waving when they brought us over in chains and hosed us down when we tried to vote.” Besides, the rapper had more pressing concerns.

Several months before September 11, Riley’s duo, The Coup, completed the cover artwork for its latest album, Party Music. The incendiary image depicts Riley and DJ Pam the Funkstress blowing up the World Trade Center. As the twin towers go kaboom in the background, DJ Pam wields two wands as if she’s conducting an orchestra, and Riley holds a bass guitar tuner that doubles as a detonator.

Riley, who cites everyone from Karl Marx to Mao Tse-tung to Kwame Nkrumah and Franz Fanon in his lyrics, has built a career out of making bold political statements. A confessed communist, he’s never shied away from his militant stance, and he only grudgingly agreed to change Party Music‘s controversial sleeve.

“The album cover was designed as political imagery to reflect our general disapproval of corporate capitalism,” Riley explains. “We talk about destroying capitalism, and we wanted an album cover that represented the general message of our music. It was a metaphor. It wasn’t supposed to be literal. We chose the World Trade Center twin towers because it’s the symbol that best represents capitalism.”

In issuing a formal statement about the cover design, Riley emphasized that he in no way condoned the terrorists’ actions, but he also urged people to put the situation in perspective. “While the television media works the public into a venomous pro-war frenzy, however, it should be noted that a great number of similar atrocities have been committed by the U.S. government and its corporate backers over the last few decades — many of which have caused a far greater loss of life than the recent bombings of New York and Washington, D.C.,” he writes.

For its revised cover art, The Coup chose a more subtle, if equally menacing, tactic. The album’s title is iced-up with sparkling diamonds, and the scene is set in a swanky-looking lounge. A white corporate type clutches a martini glass, from which a blaze is starting to rise. In the background, there’s a can of gasoline. It’s another memorable snapshot from the class-warfare front, but The Coup’s ability to incite stretches far beyond its album art and brilliantly subversive album titles (Kill My Landlord, Genocide and Juice and Steal This Album.)

However, Riley, who produced all but one of the tracks on Party Music, has given his newer creations a quicker pulse, pumping up the beats-per-minute to create an uptempo, jazzy approach. Working out of his home studio for the first time, Riley says he had more time than ever “to play around and experiment with different sounds,” and the results bring to mind early Funkadelic, Thelonious Monk and even Quincy Jones’ Sanford and Son theme.

Lyrically, Riley’s narratives are some of the best-ever recorded portraits of life in the ‘hood as an underprivileged African-American. He’s hip-hop’s Bob Dylan, possessing vivid imagination, a dark sense of humor, a storyteller’s knack for keeping his tales compelling and razor-sharp political insight. And his intelligence is even more refreshing given that most rappers these days sound as if they showed up at the studio five minutes before their scheduled recording session with a blank legal pad and an empty head.

“I like to challenge myself when I write,” Riley says. “I’m not going to write something just for the sake of writing something that sounds good. It has to have meaning. I spend hours, days, months just writing one song. If I get to a point in the song where something doesn’t work, I start over again until I can get it right.”

In the commercialized rap world, Jay-Z gets the glory, DMX gets the hype and Nelly gets the sales. No disrespect, but none of hip-hop’s current lyrical royalty deserves to be mentioned in the same breath as Riley, a truly gifted writer who takes listeners on a mental parade with his descriptive metaphors and clever use of slang phrases. They own sweatshops, pet cops and fields of cola/Murder babies with they molars on the areola/Control the pope, dalai lama, holy rollers, and the ayatollah/Bump this rollin’ in your bucket or your new Corolla,” Riley spits on “5 Million Ways to Kill a CEO,” one of several tracks that prove his astute political knowledge rivals that of any nerdy National Public Radio correspondent or pretentious network anchor. In addition to lambasting greedy corporate tycoons, Riley memorably protests police brutality (“Pork and Beef”), teen pregnancy (“Nowalaters”) and organized religion (“Heaven Tonite”).

Fighting the power has come with a cost for The Coup. Despite dropping two masterful albums, Riley found himself unable to pay the bills as a rapper and took a hiatus from recording in 1994. In addition to working for a delivery company (DJ Pam never left her nine-to-five), Riley started a leftist grassroots organization committee called the Young Comrades. Eventually, though, the pull of creating beats and rhyming proved too strong to resist, and The Coup came back in 1998 (minus original member E-Roc, who had joined the ranks of the regularly employed).

Like The Coup’s previous efforts, Party Music figures to garner a tremendous amount of critical acclaim while failing to connect with the record-buying public. The masses have never been down for revolution, and Riley’s call to arms is way too radical for the television and radio broadcast industries, especially given the current climate.

“There is extreme censorship going on, but it was been happening way before September 11,” Riley says. “We’ve been told to tone down lyrics in our music and imagery in our videos numerous times.” Each time, The Coup has ignored the warnings, and its message has become even more powerful. Take this line from “Ride the Fence”: This beat is joyful like jailbreaks/The whole world is anti-United-Snakes/So check it out; anticipate the anti-venom/And move your antibodies to this revolution rhythm.

It’s difficult to live up to such rhetoric in everyday life, but Riley could never be accused of being a studio activist, spitting big talk on wax and artfully dodging the streets.

Activism is in his blood. He grew up in East Oakland, California, birthplace of the Black Panther Party, and his dad was a lawyer for the organization. As a member of activist groups Mau Mau Rhythm Collective and Young Comrades, Riley helped to organize community protests against racist conditions in the Oakland school system and an anti-cruising law enforced by the Oakland police (which was later repealed by the Oakland city council).

Now he does the majority of his protesting through music. And though the title of The Coup’s latest disc suggests that black folks are having a good time, the messages tell a different story. It’s a war goin’ on/The ghetto is a cage/They only give you two choices/Be a rebel or a slave, Riley raps. That’s The Coup’s idea of Party time, and the drinks this duo is serving are plenty potent. Molotov cocktail, anyone?