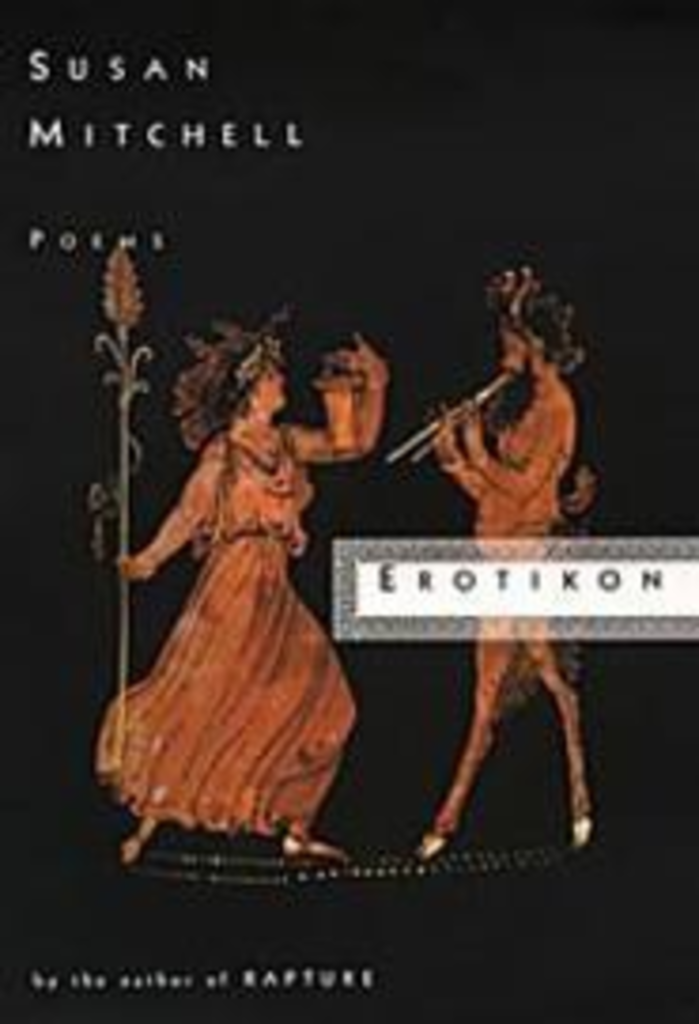 The unfortunate truth about poetry is that anyone can pick up a bound, blank journal with curlicues or an Impressionist painting on the cover and fill it with what might loosely be called “poetry.” But when the Guggenheim Foundation starts paying people to do so, literate individuals must protest. Erotikon, a new book of poetry by Susan Mitchell (HarperCollins, $23), is such “poetry.”

Erotikon is a lyrical sequence broken up into four bizarre, seemingly connected parts. The first part is called “Bird: A Memoir.” “Bird” begins with some promise: If you go back far enough in my family tree there are birds./Tall, hunched-up proud birds and also small skittery birds/that move like shadows in the branches.

Wait. Did she write, “move like shadows”? The first stanza of Erotikon has not even been completed before the tired similes appear. And ironically, the worn-out language isn’t even Mitchell’s biggest sin. It’s that she apparently owns a thesaurus and uses it without discrimination.

“Bird,” like the rest of Erotikon, is so entirely self-indulgent that it’s an absolute chore to read beyond the first few pages. Mitchell is lyrical, yes, and she has a penchant for alliteration and vast polysyllabic waves of sound and rhyme, both internal and otherwise. But the problem with this is that Erotikon is not a children’s book, as much as its Seuss-like wordplay might indicate:

“Wimble and wight, a phrase I like to repeat. Is it

to calm myself? I am not adverse to fluffs of comfort,

and have been known to myself to sing Bye Baby Bunting.

And in a voice playful, intimate, haven’t I pounced

on myself with snug as a bug in a rug? Wimble and wight,

perhaps more of a tonic, flagellum or

with which I whip myself to glees of teeter.

To put it quite simply, this is just horrible. And the entirety of “Bird” goes on in much the same way. I’m sure Mitchell has a plan, that she’s telling an essential story of something weighty and pithy, but just as the words penned in the blank journal by the 13-year-old whose parents have just divorced carry much emotional meaning, any poignancy is all but lost to anyone but the writer.

Among Mitchell’s other crimes, most often not committed by the usual 13-year-old, is her persistent use of ridiculous words and phrases. Again, in “Bird,” she writes:

To perch — or to percolate? Oh, I am restless as dice.

Does this make me a bad omen? But see, like the seasons,

like cloud, I am changing. From grumpy to grumous.

as a Swiss watch in its little weskit of birdy black and gray.

Never one of your nose nappy, tae titly, moo merry.

How is a reader to be moved by such words? In fact, the average intelligent reader will never make it through all 13 pages of this “memoir.” Mitchell writes poetry like a giggling, silly circus performer; she writes poetry as if she’s performing with a Roget’s and a whip.

But if “Bird” is bad in its seemingly endless length and tediousness, Mitchell’s more conventional poetry is no better. In “Wind/Breath, Breath/Wind,” a poem from Part Two, which consists of eight poems, she writes, Isn’t it strange when we take the air/into our mouths, it is renamed breath, and the fact/that we can change air into breath, and breath/back into air, is what proves/we are alive. Pondering the act of breathing does not produce an epiphany in most people unless they’ve just been choking on a fish bone.

Finally, Part Four consists of a shorter poem titled “Golden Fleece,” which doesn’t even try to be a poem. Mitchell writes, Just like that, I decide to translate a poem that has never/been written, a poem that will be literal and free,/haughty and humble, ornate and spare. She continues, It is difficult to convey in our language the willfulness,/the animal energy of the original. All those snorts,/growls, leaps, and bounds. To ride that/language bare-assed: no saddle. Only Mitchell really doesn’t ride the language bare-assed. She doesn’t ride at all. It is in this stanza where she reveals her hubris — that she sees herself as some sort of poetic cowgirl who is riding her wild animal — words, phrases, language: out of control, but beautifully so. Only it’s not beautiful. It’s just big words/with occasional line breaks/that in and of themselves/don’t make it poetry.

Mitchell’s Erotikon is not untamed, or ferocious and scary, or sexually out of control. It’s sloppy, confessional to the point of unreadable, and puzzling. Telling, then, that in her final poem, Mitchell writes, As for who is fleeced, who sacrificed?/It might be more correct to say that after a while/a language grows tired of its riders./They are shaken off, discarded. And more than a little sore.

Feb 26 @ 8:00 pm Ollie's Local
Join us for general knowledge trivia covering topics ranging from history to music to science to pop culture. The game is free to play and prizes are awarded to the top three teams! Recurring event every Wednesday.FacebookPinterestTwitterLinkedin
February 2020 Feb 2020
Subscribe