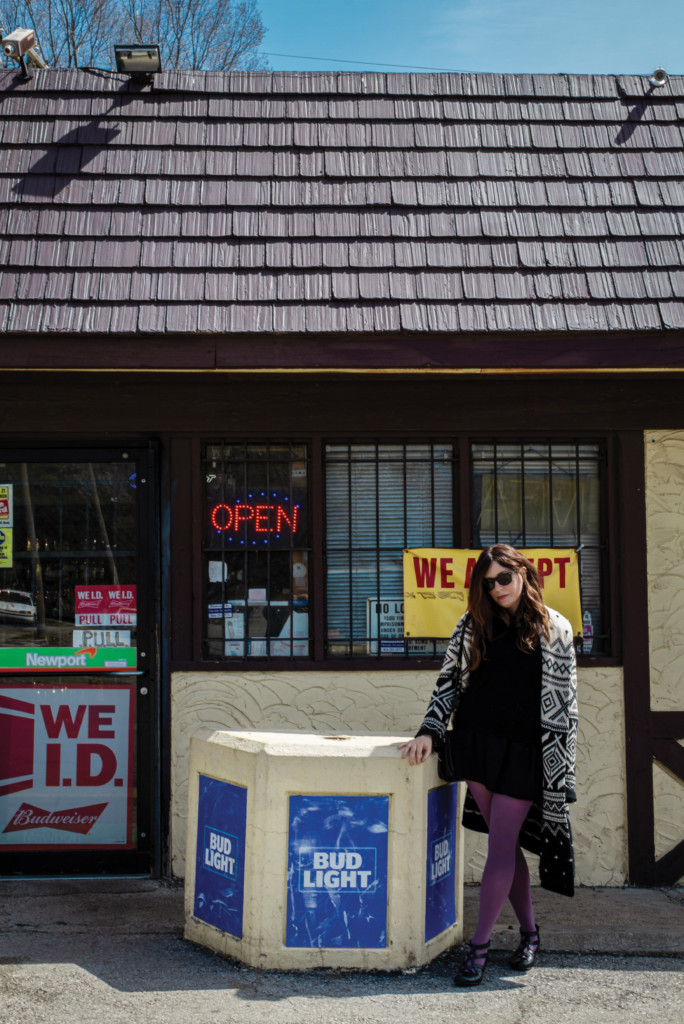 “There’s a way the story could have been framed as a heartwarming struggle of a single mother overcoming cancer,” Boyer says. “I don’t want to read that book.” // Photo by Cara Lefebvre.

Anne Boyer’s latest book, The Undying: Pain, Vulnerability, Mortality, Medicine, Art, Time, Dreams, Data, Exhaustion, Cancer and Care has earned her an excerpt in The New Yorker, a glowing review in The New York Times, a successful tour, and a rapidly growing new audience. But in many ways it’s a bittersweet kind of success. The book is a memoir documenting what may be the worst thing that has ever happened to her.

Boyer was born in Topeka, raised in Salina, attended Kansas State University and Wichita State University, and is currently an associate professor at the Kansas City Art Institute. She’s been publishing poetry for more than a decade, but it was Boyer’s 2015 collection Garments Against Women that seemed to break through into the literary mainstream. Critical acclaim and prestigious awards—like the 2018 Whiting Award for poetry and nonfiction and, of course, The Pitch naming her the Best Writer in Kansas City in 2016—have followed.

The Undying is an unflinching account of how Boyer has survived a diagnosis of triple negative breast cancer in 2014. It’s mostly memoir but also includes divergences into medicine and history, examining   how the condition can be traced back as far as ancient Persia, how grueling both the surgery and chemotherapy can be, how many of the drugs to remedy it are environmentally dangerous, and how industrialization and corporate medicine are part of the problem. There’s a lot going on here, all of it worth your time.

In early October, just a few weeks after the book was published, The Pitch met up with Boyer at her Waldo home, which she shares with a trio of cats. Boyer’s friend, the photographer Cara Lefebvre, who provided care to Boyer throughout her health struggles, also joined us. As you might discern from this abridged conversation, Boyer resents how the dangers and torments of cancer are often underestimated, but she also offers a vivid—and, at times, funny—perspective on how she has faced (and continues to confront) death.

The Pitch: One of the vivid things you point out in the book is that our medical system doesn’t do well for single people.

Anne Boyer: No, it absolutely doesn’t. Remember, Cara, how we had to take off lunch, so I could get my official diagnosis?

Cara Lefebvre: It was hard. We had to do a whole chart and everything and really plan rides. That was a very basic thing, but to give you a ride anywhere had to be planned weeks in advance.

Boyer: Because there was no person immediately available. If you have a family member who is sick, you can take time off and not be punished for it, but if you’re not married to somebody, if your mom’s not there or if you don’t have children who are old enough to take care of you, there’s nobody. We had to patchwork this system together so that I could have care. We tried to figure out a way to distribute it across friends so that any one person wouldn’t be horribly burdened and could continue their lives as they also cared for me.

I think it also says something about people whose primary caregiver is their romantic partner, in that the amount of work that those partners have to do is almost inhuman, too. There should probably be a way in which care is distributed socially, so that it doesn’t fall into the narrow confines of the family. And yet, as it’s organized, it really does. Usually the care falls on the women of the family, the daughters and the mothers and the sisters, so it has this unfair burden of gender on its structure.

In The Undying, you describe how you had just had extensive surgery, but you were released from the hospital the day of your double mastectomy despite the fact that you were in no shape to drive or take care of yourself.

Lefebvre: We were both dumbfounded and just in shock. “So, I guess, we’ll pack up?” It was insane.

Boyer: I was barely awake. I couldn’t do anything. I was in extraordinary pain. Maybe this has changed in the last five years, but I don’t think it has. It was exceptional to stay overnight after a double mastectomy. You are just ejected into the world, heavily drugged. Remember the drainage, the packets of blood?

Lefebvre: They didn’t really tell you what to do, either. We’re all just in shock and kind of terrified. No one felt really comfortable.

Boyer: I had friends who were there with me. But there are a lot of people who don’t have the kind of friends you need who can help you drain blood from your body. That requires a kind of intimacy. I did better than most people do after a double mastectomy, but I was worried about who was going to help me go to the bathroom if I can’t wipe myself? This is what hospitals help you with. Instead, I had to try to figure out who do I know enough for these deeply intimate and admittedly repulsive parts of having a body in distress.

You structured The Undying like your poems. The incidents aren’t presented chronologically, and there’s a dream-like narrative.

Boyer: At first, I thought that I would make it more straightforward, and it was too difficult, so I decided to write it like a poet would write it, and that allowed it to be possible. I wanted it to hold a complex and difficult truth rather than an easy truth. There’s a way the story could have been framed as a heartwarming struggle of a single mother overcoming cancer. I don’t want to read that book.

The difficulty of writing [about the worst parts of cancer] was feeling bad that if you write it, it’s going to expose this train of misery that others want to protect themselves from. For caregivers, It’s hard enough to think in detail about what the person you love is suffering through. That’s difficult. For many people who survive cancer, they dissociate themselves and forget about it. But for me, I have to just go all in. I do sometimes worry about what will happen to readers, especially for those who have to relive those feelings. On the other hand, your fingernails fall off. We didn’t know this was going to happen. Remember how cavalier we were because we thought that breast cancer was not a big thing to worry about?

Lefebvre: “There’s a cure for it, and we’ll just get over it.”

Boyer: There’s this intense, bizarre, meaningless positivity about the worst human experiences that breast cancer culture has asked of us. It didn’t prepare us for what was gruesome. I didn’t have much time to think about what was to come.

You can articulate your frustrations. A lot of people can’t.

Boyer: Women aren’t supposed to be angry like that. Imagine you’re a mother or a caregiver of vulnerable people. We’re supposed to be friendly and nice, but then inside is the very thing itself, which is breast cancer culture, and being told that if you’re not positive you’ll die. It will be your own fault if you don’t get better. Go run a 5K, but don’t go Rambo [laughs]. It’s like gaslighting with a smile. You would think that cancer is the happiest, most cheerful thing you could have. Well, I am Rambo-ing. I still am. We should be outraged when outrages are done to us.

Lefebvre: You can help without knowing how they’re feeling. You can just be of service for what they want done. I did a lot of cleaning because your house had to be impeccably clean for health reasons.

Boyer: You let me be me. If you treat them like a patient, it’s the worst feeling. The moments that felt the worst were the ones where people were talking about me like I wasn’t me.

Lefebvre: It was important that you still had your voice still.

Boyer: You allowed me to be weird.

Boyer: [Both laugh] I learned so much about who my friends were because there were people who just skedaddled.

Lefebvre: It was awesome to see how each friend contributed. One made you do reiki and drink Fiji water. Everyone had their own strength, and it came together beautifully.

The book also deals with how there is a system that drives how we treat cancer, and how system exposes everyone to its dangers.

Boyer: When you’re inside medicine, you’re not just inside medicine. Medicine relates to all these other systems, so there are issues of gender and issues of race—there are horrifying outcomes because of racial bias in medicine, and questions of class, and questions of marital status. All of these things impact medicine, so it’s not just the body, but all these systems that interact with each other. It shows epidemiologically in who dies and who lives.

If you have a life that’s already hard to begin with, or if you don’t have much money or are racially discriminated against, cancer hits you harder, too. I tried to address this in the book without yelling how wrong the world is.

Because of the book, you do have a platform that previous survivors who’ve lived through this haven’t.

Boyer: I had success as a poet, but it doesn’t always translate to a larger population because poetry is published by small presses, and it’s a relatively small community. People read poetry internationally, so you can be known in that world, but that doesn’t translate to newspaper coverage. My poetry was reviewed in The New York Times, too, but that was exceptional. It was an unanticipated success for a poet. When I wanted to write this book, I wanted to reach as many people as possible. I found an agent, a manager, and this team who could help me. I would never have anticipated that’s how my career would go. That’s such an unfamiliar terrain. What’s interesting to me is that, with this book, I have no idea where my writing belongs anymore. It’s a new adventure in what I’m doing.