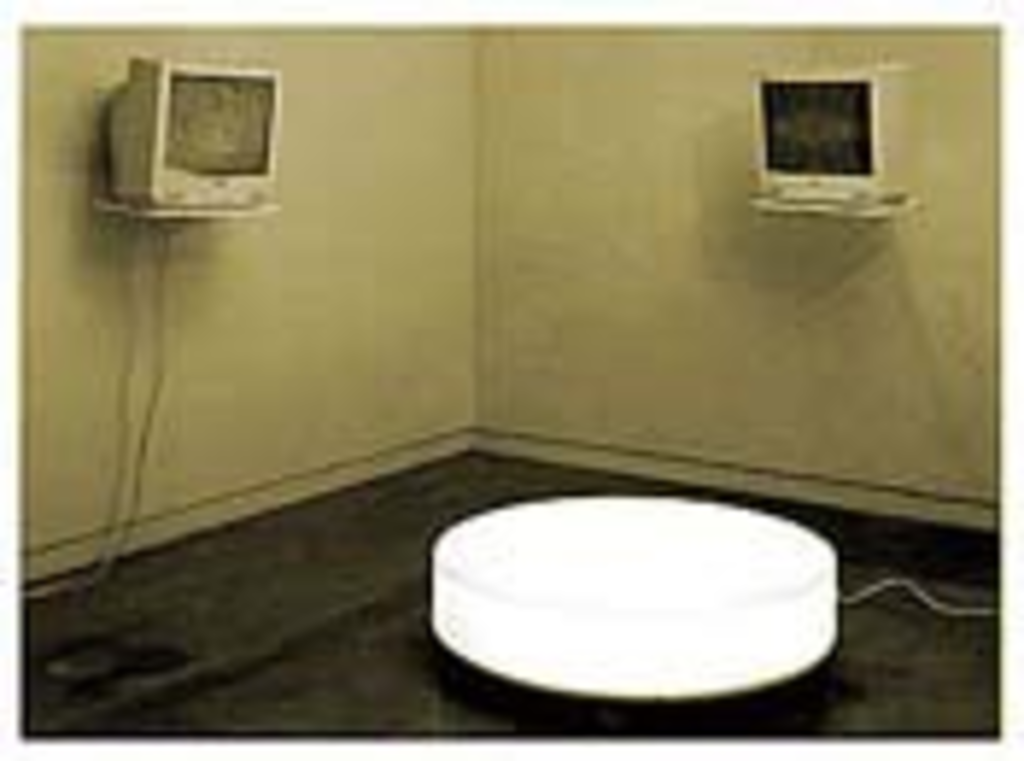 We spend a good deal of our waking hours staring at a screen. If we’re not watching television, we’re on the computer or at the movies. Recent studies suggest that Americans spend time on their home computers that would otherwise be spent with family and friends. Television time, mind you, has not been sacrificed.

Is this trend a disturbing hallmark of contemporary society? Possibly. Is it likely, over the long haul, to radically alter our lifestyles? Probably. Is it realistic to shun the screen in favor of some pastoral paradise-lost? Doubtful. Families have been gathering around the tube for decades now. The movie theater’s wide screen continues to draw flocks of viewers. And the computer — not only a necessity for all manner of employment — has now invaded the home via the Internet.

Artists are not immune to this phenomenon, and many have been involved with various forms of screen manipulation, so to speak, since the 1970s. It’s a natural progression, really, from canvas to screen. Dana Self quotes social theorists Jean Baudrillard and Michel Foucault in order to discuss Jessica Bronson’s installation, superfluentcircumfield, at the Kemper Museum of Contemporary Art. Here’s why: Bronson, a California artist, presents three small televisions mounted to the wall. Each screen displays laser disc views of natural phenomena, but in its final form, superfluentcircumfield is anything but natural.

Both Baudrillard and Foucault discuss how technology shapes our behavior. They argue that we no longer negotiate the natural world. Instead, we negotiate our ideas about it. Foucault often analyzes the effects of modern prison design upon its occupants, and Baudrillard, appropriately, dissects our relationship to the screen. As we continue to use technology to shape our world and to communicate, we become once, twice, even three times removed from actual events. In other words, we experience science fiction, not fact.

Such experience shatters our very notion of a factual event, and Bronson, a sci-fi buff, uses this idea as a starting point. Her three fluid screens — with their accompanying sound — work in concert, and she wants us to know we’re being manipulated.

“Lost Horizon,” a skewed, wide-angle view of a cracked, orange landscape, plays on the left screen. It’s a relatively short piece, and midway through it one’s view of the landscape flips upside-down. It ends with a series of rapid-fire edits between the two views, and then, unceremoniously, it begins again.

The right screen plays a looped satellite view of a hurricane called “Does the ocean think?” Despite the low, hollow soundtrack — which adds a richness to the overall sound in the room — this piece gets upstaged by the other two.

Bronson’s “First and Last Strike” deserves its central position. In it, seemingly endless variations of lightning patterns cut across the screen. Bronson pulls out all the technological stops here: She used multiple split-screen variations during her editing process. Stock footage of lightning strikes upon various locations becomes an evolving design motif, and as the disc plays, one experiences a moving mandala. “First and Last Strike” — in addition to the final, rapid-fire sequence of “Lost Horizon” — best exemplifies Bronson’s interest in science fiction’s ability to “mediate between spiritualistic and materialistic forces.”

Bronson also includes two sculptural elements: thick discs lit from the inside, each measuring 42 inches in diameter and mounted on wheels. She calls each one “we have heaven,” and they look like platforms upon which something should be placed and moved about the room. Although they convey a certain amount of irony — portable “heaven” in the form of plastic and wood — their inclusion in the installation seems forced. Their dialogue with the three screens requires one to perform mental acrobatics in an effort to “get” it, and once “got,” they are quickly forgotten.

Ultimately, Bronson’s work deserves recognition for its play between fact and fiction, nature and culture, material and spiritual. It’s easy to ignore a few presentational missteps when there’s so much to think about. Someday, though, Bronson should present “First and Last Strike” all by itself . . . in a darkened room . . . on a large screen . . . with quadraphonic sound. Then one could truly worship at the altar of the flickering screen.

at the Kemper Museum of Contemporary Art