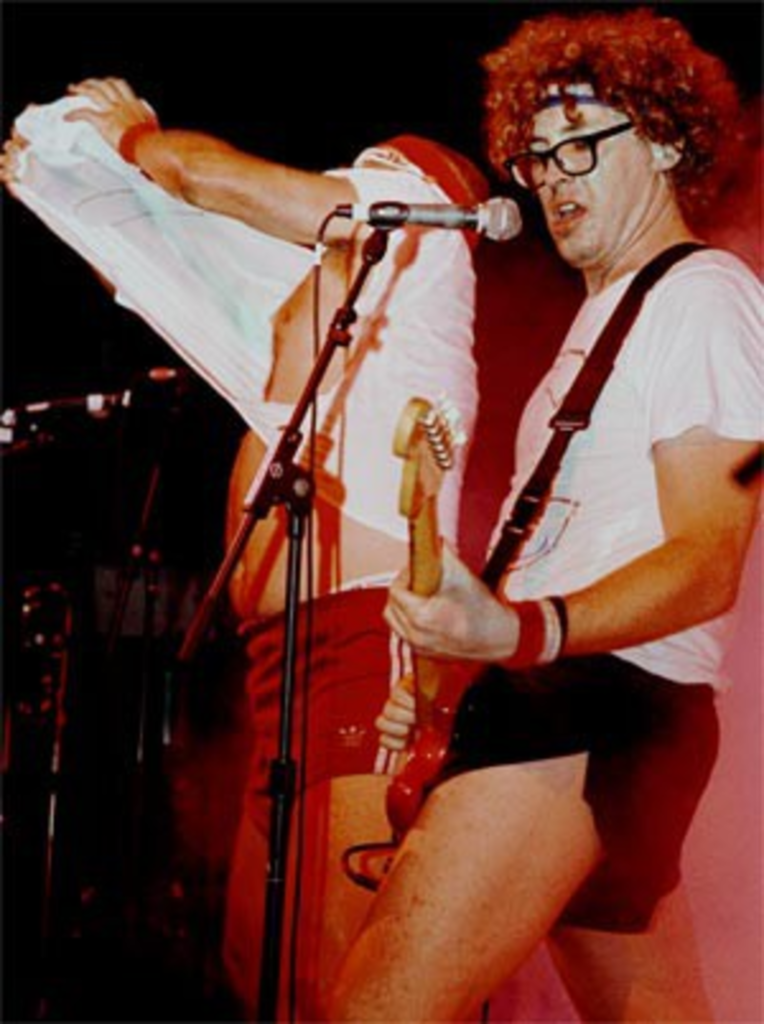 Mike Park, former frontman of the most excellent ska ensemble Skankin’ Pickle, puts on an amazing show. His latest brainchild, the not-for-profit charity show Plea For Peace, brought out a diverse crowd of bands Thursday night that almost threatened to outnumber the sparse yet enthusiastic crowd at Liberty Hall.

Nine brilliant performances were squeezed tightly together in a little more than four hours, something virtually unheard of these days. Each band used the same amplifiers, same microphones, same drum kit, and, in some cases, even the same guitars to help speed up the downtime between sets. No changeover lasted longer than 15 minutes, and that left little time to get bored. Not that it was likely that anyone would have grown tired, given the musical diversity provided.

First up was a band from Chicago called Bitchy, which crammed six second-wave SoCal-inspired hardcore punk tunes into its 10-minute set. This earnest, fresh-faced trio did little talking and a whole lot of rocking.

Within seconds of Bitchy’s conclusion, a barefoot Mike Park came out on stage with an acoustic guitar and performed some great songs that brought to mind Ben Harper covering John Wesley Harding’s folk catalog. He was good-natured and witty, and he played clever songs such as “Don’t Sit Next to Me Just Because I’m Asian,” which detailed his reluctance to be considered bright just because of his ethnicity. This seemed to be one of the many themes of the night: acceptance of diversity.

Park put his short set to rest and out came Dan Potthast, the lead singer of St. Louis-based ska maniacs MU330. This singer/songwriter opted for shoes, but his instrument of choice, again, was the acoustic guitar. Potthast unspooled some fine selections from his solo release, Eyeballs, and he too showcased a knack for writing exceptionally bright, amusing lyrics. He sounded a bit like Elvis Costello, especially on the enchanting “Streetlights,” a song about how the Catholic nuns told a young Dan that girls got pregnant by staying out until the streetlights came on.

Next up to bat was Lawrence Arms, a band surprisingly not from Lawrence.

Its set settled somewhere between punk rock and stand-up comedy. One of its members suggested that from now on the group would change its name every time it came to a new town, so for the next stop on the tour it would be the St. Louis Arms, then maybe the Chicago Arms, and so forth. Brendan Kelly, the bassist/lead singer and former vocalist for the seminal ska/punk outfit Slapstick, led the group’s blisteringly frenetic attack.

After the Arms folded, The Honor System (featuring former members of another Kelly band, The Broadways) combined the intensity of, say, Bad Religion lead singer Greg Graffin with the melodic indie rock/psuedo-punk sounds of Sunny Day Real Estate or Jets To Brazil. It wasn’t too heavy, but it was superbly dynamic and quite compelling.

MU330 quite literally took over next. Clad in gym socks, short-shorts, and homemade T-shirts with “Plea for Peace” scrawled across their chests, the members of this Midwest standard busted out a wicked skanking set that got the crowd moving and shaking, especially when it unveiled such classics as “Hoosier Love.” The group had a sublime sense of the ridiculous, and it went all out to entertain its fans.

Chris Murray, the one-man ska-band, came out with an acoustic guitar that looked suspiciously like the one Mike Park used earlier in the evening. He turned back the clock with some great traditional ska, reggae, and rock-steady numbers. On one tune, the drummer of the Blue Meanies and the trumpet player from MU330 assisted Murray, bringing a family feel to this warm and fuzzy set of happy island music.

Next, Chicago’s up-and-coming indie-rockers Alkaline Trio blazed through a set that pleased a large, vocal portion of the audience, who seemed to be there just for this band. Lead singer/guitarist Mike Skiba changed his lyrics to work Mike Park’s name into several songs. To retaliate, Park sat behind the mixing board and toyed with the monitor sounds that only the band could hear. It didn’t mess them up one bit, but when the band would smile unexpectedly, one had to wonder what Park was doing to them.

Bringing the satisfying evening to a close were Chicago’s Blue Meanies, a seven-piece hybrid rock/ska outfit with a love for very loud sounds. At times, their dynamic set was too loud for the fans, forcing several to seek shelter near the exits or to purchase ear plugs for a dollar. Fronted by a singer who looked like an albino Gary Newman, the Blue Meanies were what the MC5 or Rocket From the Crypt might have sounded like had they dabbled in ska. As the crowd danced away, the Meanies capped the night off with a roar, providing enough energetic booty-shaking noise to stun small pets and children.