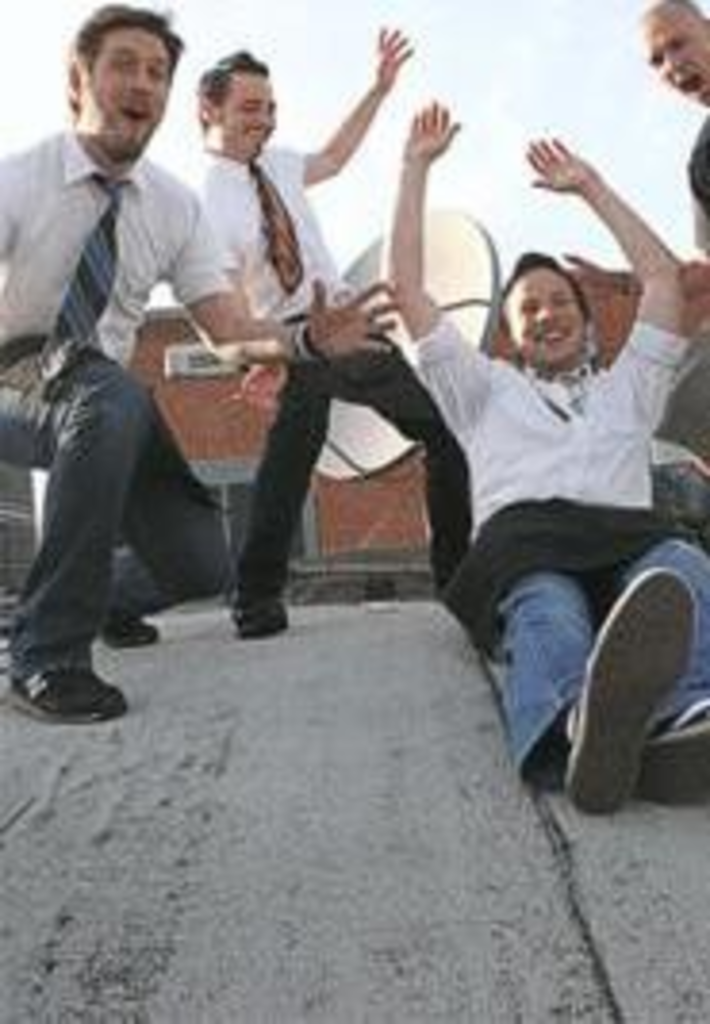 In the song “Garageland,” a tribute to penniless, scrappy garage bands on the Clash’s first album, Joe Strummer sings: Back in the garage with my bullshit detector/Carbon monoxide making sure it’s effective.

There’s one garage band in midtown Kansas City with a fully fired-up bullshit detector. Only, unlike the Clash, this band isn’t trying to avoid BS. Rather, 30 Minute Recess uses its radar to hunt the shit down and exploit it.

30 Minute Recess does nothing but cover bad ’90s hits. Somehow, though, the band manages not to suck while doing it. Jimmy Sullivan, the singer, guitarist and trumpet player, explains it this way: “If we started a cover band and played music that was good, that would be lame.”

He has a point. When inexperienced musicians start bands, they play covers. The default musical act for suburban bars in America is the cover band. Whereas a mediocre band playing original songs can’t get gigs, lame cover bands play all the time — and get paid well doing it. On the eighth day, God created the first cover band (and it covered Genesis).

Even if a cover band chooses to play quote-unquote cheesy music, it’s still not taking any risks because cheesiness, by definition, is secretly enjoyable. If you enjoy hearing Bon Jovi’s “You Give Love a Bad Name” on the radio, then you’ll enjoy it when a proficient cover band plays it.

The genius of 30 Minute Recess is that it plays songs that no one with decent taste would ever choose to listen to on his or her own time and does it with such gusto —with such a keen sense of “yes, this song is awful, now rock out!” —that the audience has no choice but to rock out.

The secret is all in the timing.

Today, we love ’80s music, and we still feel bitter over the fact that in the ’90s, the music industry put a steaming pile of horseshit under our collective nose and told us it was apple pie — and we ate it up. I, for one, will not be alone in admitting that I sang, loudly and without irony, whenever “Let Her Cry” by Hootie and the Blowfish came on the radio, realizing only after buying the CD that Hootie thoroughly sucked.

Though it sounds as though it would be a tough sell, 30 Minute Recess has discovered the inherent hilarity in someone sitting down with a guitar and singing an accurate rendition of “Push” by Matchbox Twenty — complete with Rob Thomas’ overarticulated baritone and his burning I-want-to-worship-your-asshole eyes. Carrying it further, a band doing an entire balls-out set of songs on that level of atrociousness creates an experience that can’t be described in words. The modern brain is not prepared for such an onslaught. The band’s motto sums up the idea: “The songs you hate by the band you love.”

The band you love was born at McCoy’s. Three of its members are servers at the Westport eatery, and one is an ex-employee. In addition to Sullivan and Boyd, there’s Dan Talmadge (who played in the final incarnation of Elevator Division), who sings and plays guitar and keyboards, and Mike Banik — the ex-McCoy’s cohort and also an ex-East Coast thrash drummer — on drums.

The band has played only a handful of gigs. Its first was at a Matrix-themed party at a friend’s apartment in November 2005. 30 Minute Recess, then called Candy Revolution, had a full setup, complete with drums and PA. It was a miracle that the neighbors didn’t call the police. Even more miraculous was when a partygoer offered the band cash to play an encore set.

“When that guy paid us a hundred dollars, I knew we were onto something,” Boyd says.

Shortly afterward, with its new name, 30 Minute rocked McCoy’s on New Year’s Eve, just as the band that inspired the guys had done a year before, albeit with more youthful energy. The band in question was called Huge, a less-than-stellar cover band made up of middle-aged men.

“They played music they really liked. Some of it was good, and some of it was bad, and we laughed all night,” Sullivan recalls.

“After they played,” Talmadge adds, “I said, ‘Jimmy, we should start a band that just plays shitty music.'”

This idea led to a growing repertoire that now includes hits by the Goo Goo Dolls (“Slide”), Train (“Meet Virginia” and “Drops of Jupiter”), Silverchair (“Tomorrow”), Semisonic (“Singing in My Sleep”) and just about anything Rob Thomas had a hand in, including his universally loathed Carlos Santana collaboration, “Smooth.”

But it doesn’t stop there.

For an ’80s-themed party at the Record Bar sponsored by the local chapter of the ACLU, 30 Minute Recess became 30 Minute Starship and played ’80s covers (not all of them awful songs) to a completely amped crowd. When Sullivan, clad in a sleeveless denim jacket, donned a giant American flag and bellowed “Born in the U.S.A.” with Brucelike ferocity, women in front of the stage clawed at his thighs.

It doesn’t end there, either.

30 Minute Recess is also working on an album of children’s music. Grown-Up Jobs will feature songs titled “The Policeman,” “The Astronaut” and “The Garbage Man.” Sullivan and Talmadge are the songwriting team behind this side project. When I ask Boyd and Banik if they’re disappointed that the band has expanded its inventory to include original kids’ songs, they both respond in the negative.

“They’re really kind of catchy,” Banik says with a shrug.

I got to see 30 Minute perform at a recent garage rehearsal, where the band revealed its crowing compositional achievement so far. It’s called “The Last Indie Rock Song Ever Written.” It is so formidable, Talmadge claims, that when they play it at their Saturday show, “it will put to an end the cycle of indie rock.”

“Indie rock is dead — it’s done,” Talmadge says. “You have cycles, and the end is always marked by parody. Blazing Saddles marked the end of the American western. After us, you can’t take seriously any band in this town.”

Of course, you shouldn’t take Talmadge seriously, but “The Last Indie Rock Song” is seriously funny. It begins with two-note riffs on chorus-pedal-soaked guitars that sound like U2 meets Interpol meets Snow Patrol meets every stadium-filling alternative band that has topped the charts in recent years. The verse is pure Dashboard Confessional, but the lyrics — utter nonsense.

Brown varnish, misstep back, Sullivan howls. Are you kissing my girlfriend?

The Chris Carraba-sodomizing lyrical insanity continues as the band crashes to a ringing climax, then fades to amp feedback.

The four men exchange satisfied nods. And then they play “Hey Jealousy.”