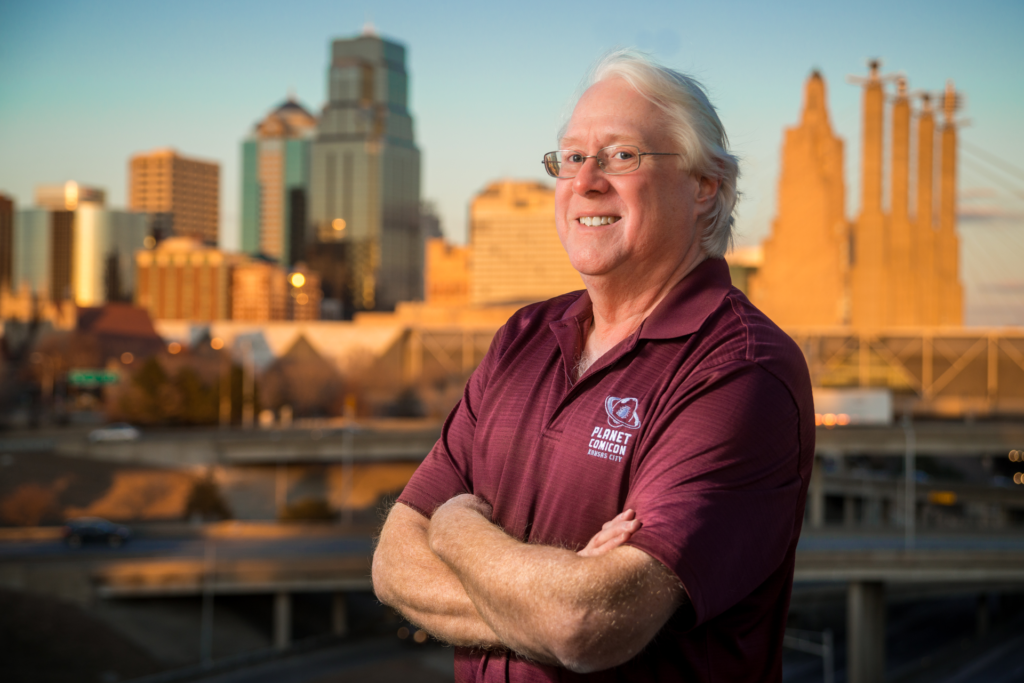 Like Spider-Man and some of the other characters Planet Comicon celebrates, the convention itself has modest origins. According to co-founder and CEO Chris Jackson, its rise over the last 20 years has less to do with being bitten by a radioactive spider and more to do with hard work and fan loyalty.

During that time, it has attracted Aquaman himself, Jason Momoa, Original Star Trek stars William Shatner, George Takei, and Walter Koenig, new media pioneer Felicia Day, Rocker Jane Wiedlin and rap legend DMC. (True to the comic-centered roots of the convention, the musicians were in town to promote their new books.)

The Pitch contacted Jackson by phone last month as he was preparing for the event. Our conversation has been lightly edited for clarity.

The Pitch: How has Planet Comicon changed in the last 20 years?

The convention world has changed in the 20 years. Planet Comicon has evolved with it. When I started the show in 1999, it was a relatively small show out in the suburbs. There weren’t that many shows around the country. There weren’t the hundreds there are now. Why that has happened is one of the things that has affected how my show has changed. Conventions have become much more popular. Comicons were known, but not widely known. And then suddenly about seven or eight years ago, they started hitting the national spotlight, and then everybody started hitting conventions.

I started this convention with William Binderup of Elite Comics. We had a couple of shows. It became a lot harder to do than we thought. It was not as profitable as we’d hoped. William needed to concentrate on his store. The convention was given to me to run, and he has been a stalwart supporter of the show.

It started primarily as a comic show with — I think one media celebrity, Kenny Baker. Kenny was a great guy to have there. He was R2D2 in the Star Wars movies. We were a very comic-centric show. As the years went by, I brought in more creators, and I brought in more celebrities.

By 2012, I had nine celebrities, and now we’re up to 30 or 40 celebrities per show. It’s evolved into more a media celebrity-comic creator show, but when I say media celebrities, I try to involve programming that is related to the pop culture genre and the comic book genre. A lot of the crowd is drawn in by the allure of meeting the people they see on TV or in the movies. And that is one of the reasons for changes in shows over the last ten years in particular.

The point of an event like this is provide a venue to bring fans together that enjoy this particular kind of genre. They’re not all the same fans. We’re providing a venue for all these people to come together and enjoy their particular interests. If you can provide that kind of venue, you can be successful.

I’ve also noticed that more women have showed up — both as fans and participants.

Another aspect of shows everywhere that has grown dramatically is costuming. I can’t even tell you the first year if somebody showed up in a costume. There’s a group that has come out various years in Star Wars costumes. Todd Sheets, a local filmmaker, came as Batman. I’ll bet he was one of the first people to come in costume. The people enjoyed creating a costume and dressing as one of their favorite characters.

As that grew, the number of women interested in coming out grew because lots of women from their late teens to their early 30s really enjoy creating these costumes and coming out to shows. That’s one of the most positive aspects of any part of the show is that we have had this element that has created more gender equality in attendance — not that it has created complete equality by any means, but this show is for everybody.

Lots of families come to the show because they love seeing the people in the costumes. Kids love to come out and pose with people dressed as the various characters. Some people get really dramatic in the extent of their costumes.

There are also things that might interest more female fans. There are geek cosmetics that come into shows. There are clothing vendors, and there are vendors who sell things to the cosplay community.

We also have one of the top cosplay communities in the country. We devote a lot of space on the floor for cosplayers to congregate and pose with the public. At many shows, you have these big elaborate costumes in the regular aisles of the show, but it blocks up the aisles at a lot of shows.

While you’ve had big stars like William Shatner show up, it must have been an honor to finally get the ultimate comic creator, Stan Lee, to attend in 2016. Mayor Sly James even presented him with a proclamation that day.

That was the culmination of a very long process. I was reading Stan Lee books (The Incredible Hulk, Spider-Man) back in the 1960s. Right from the first moment I started the show, I worked to have him as a guest. I talked with him at a dinner in San Diego probably 15, maybe more, years ago. I recall going to his table and mentioning that I’d like to have him as a guest.

He said, “I don’t know. I charge $10,000 a day now to come to a convention.” And I was very intimidated by that as the promoter of a very young show and not a very large show in suburban Kansas City.

When he got him, it was many times that to bring him, but times change. I talked to his agent every year and for probably seven or eight years, but it never really gelled. As Planet Comicon grew, and its reputation grew, the success grew. His agent learned of it, and finally in 2015, I was able to connect to him and bring Stan out to our 2016 event.

That’s one of the highlights of my running Planet Comicon. He created many of the stories and the characters from my childhood.

Is there any thing uniquely Midwestern about Planet Comicon?

Eighty percent of the attendees come from within 100 miles of this place, maybe 150 miles. So it’s a distinctively Midwestern audience, but it’s fandom. In my mind, Fandom is pretty universal. If I go to a convention in Dallas or Indianapolis or Ft. Lauderdale or Philadelphia, you’re getting a lot of the same people. They enjoy comics. They enjoy the media celebrities. In that way, it’s kind of universal.

Part of that the reason from that growth is that I grew the number of celebrities that came in, and I’ve created an event that’s known across the country for solid results for celebrities and creators. That’s something that is very hard to do. That reputation allows me to have some flexibility in getting creators I want.

I get William Shatner and Stan Lee by a combination of two things: contacts in the industry and reputation of the show. They want to work with me.

It’s something I’m really grateful for, and I didn’t expect it. I think is it important to keep the “comic” in “Comicon.” I’ve strived hard to do that.

We’re really fortunate that we live in a community that has a really strong creator presence. Jason Aaron has been doing my show for at least 10 years and probably more back before he had any great success in the comic creator world, and it’s great to see him and other comic creators rise within the comic community. Jason is probably one of the top names in comics, period. We’ve been fortunate to have him every year at Planet Comicon.

We’ve got some others. Scottie Young is one of the top artists in the industry right now. He moved to the area in the last year or so, but he’s been loyal to Planet Comicon probably since about eight years ago when I first invited him because I enjoyed his work on some Oz books. When started getting really big, he kept coming back. I don’t understand why, but I’m pleased he does. I try to treat him right, and he certainly treats the show right.

Thanks again for talking — I know it’s hard to talk with a crazy reporter who’s also a geek.

I’m much more comfortable negotiating with William Shatner’s agent than I am talking with reporters sometimes. That may not always be the best thing, but I’m so used to that. I’m always wanting to convey what my show stands for, and it stands for bringing the community together and providing a venue for that to happen.