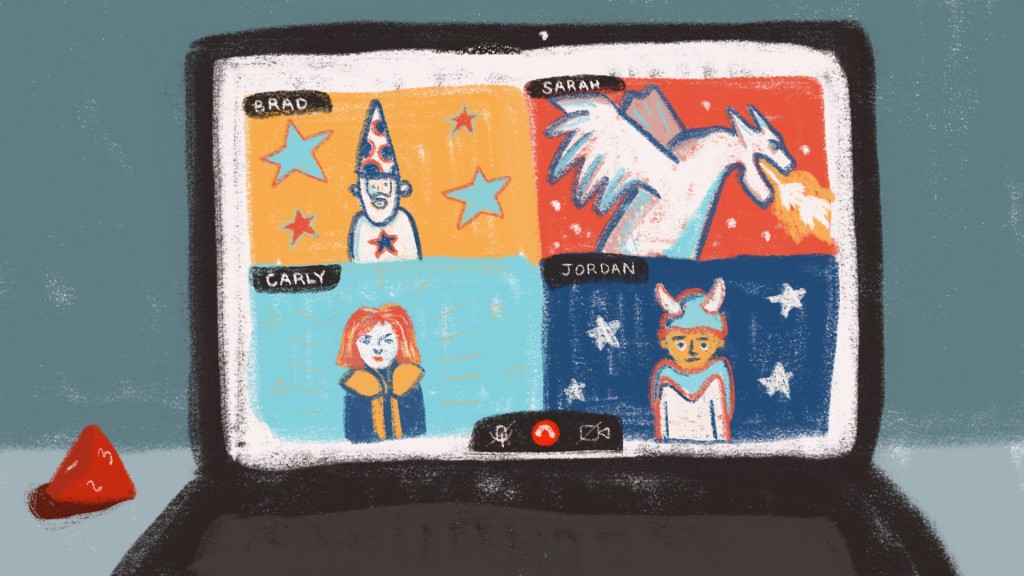 Calling all wizards on Zoom. // Illustration by Katelyn Betz.

I recently got really into Dungeons & Dragons fifth edition. Because if I’m going to get really into a socially-focused role playing game, I’m apparently going to do it in the middle of a pandemic, when we’re all socially distancing (right?), and none of us can actually see one another.

Dungeons & Dragons has been around since the 70s, and over the years I have tried (and mostly failed) to get into just about every iteration of it from the second edition through the present. The latest incarnation is what finally did it for me. But lots of other people are experiencing D&D and other tabletop roleplaying games for the first time in the midst of—and, in some cases, because of—the lockdown surrounding COVID-19.

“It’s been a fun way to set a time to be social and to be creative,” says Liz Nelson, a Kansas City native who got into D&D during the pandemic lockdown. She started playing online as a way to connect with friends while social distancing. “It’s not super taxing, but it feels like we had a night out.”

Nelson and I aren’t alone, either. According to reporting from SyFy Wire, “virtual tabletops” like Roll20 and Fantasy Grounds experienced increases in traffic by as much as tenfold in March, when social distancing first started to go into effect in the United States.

And an informal survey on Twitter and Facebook suggests that a lot of the people on my feed, anyway, might actually be playing more in the midst of the pandemic, thanks in part to online options, not to mention factors such as furloughs and work from home making it easier for everyone’s schedules to align.

“I’ve had a lot more people ask me about getting into games,” says Lawrence-based web designer Jeremiah Tolbert who regularly ran games online before the pandemic began. “It’s actually made scheduling a lot easier, too. Prior to the pandemic, I’d have players miss games here and there. Now, nobody ever misses a game.”

“My ability to commit to tabletop RPGs with my local group before the pandemic had been intermittent at best, thanks to boring adult responsibilities. That changed with COVID-19.”

D&D player and artist Chris Walton agrees: “Playing online has actually let us game more because it’s easier to line up schedules.” In fact, most people seem to be gaming more, rather than less, as the pandemic grinds on.

It isn’t without its downsides, though. “The number one thing virtual tabletops are missing is pizza,” Roll20 co-founder Nolan T. Jones told SyFy Wire in March.

“I was saddest to lose music,” Dungeon Master Rob Reeve says. “I time dramatic moments to particular songs. But either I play it on my end and it gets garbled by the mic, or I send them a Spotify or YouTube link and trust that everyone presses play at the same time. No good solution there.”

In spite of the drawbacks of not being able to actually get together around the dinner table for a game, playing online has opened up new horizons for many players, and not just during the pandemic. For Stu Horvath, host of the Vintage RPG podcast, his regular gaming has definitely changed.

“Irrevocably,” Horvath says. “I have managed to maintain a weekly board game club for several years now, but my ability to commit to tabletop RPGs with my local group before the pandemic had been intermittent at best, thanks to boring adult responsibilities. That changed with COVID-19. Playing online has allowed me to squeeze in lots of games with lots of different people all over the country. I miss playing around the table with pals, but even my local friends think that playing RPGs online is going to continue after the pandemic.”

Online gaming isn’t for everybody, however. “I very much miss the in-person gaming group I have,” author Jonathan Raab says, after admitting that he had tried and failed to get a game going via various online interfaces. “Online games just don’t have the same magic.” Which is understandable: playing via Google Hangouts and Zoom calls can feel a little too much like talking on the phone for introverts, like myself.

Yet for those who take to it, online gaming provides more than just a way to play during the pandemic. It provides a new suite of tools that experienced gamers can use, and a gateway for new people to come to the table. Not just because we all have a little more time on our hands now that we’re trapped inside, either. Wizards of the Coast, the subsidiary of Hasbro that owns Dungeons & Dragons recently made a commitment to reduce the racism and colonialism that have been baked into the game since its inception, and to make the whole experience more welcoming and inclusive.

The specifics of this haven’t been entirely revealed yet, but their statement includes walking back “evil” races (like orcs and drow) and seeking new, diverse writers and artists.

They aren’t the only ones, either. Games Workshop, makers of the popular Age of Sigmar and Warhammer 40,000 tabletop wargames, recently released a pronouncement via Twitter. It began, “Warhammer is for everyone,” and ended with, “And if you feel the same way, wherever and whoever you are, we’re glad you’re part of the Warhammer community. If not, you will not be missed.”

For many longtime D&D players, tabletop fans, and dungeon masters, this brings the game into alignment with how they’ve been running it for years. “I’m all for it,” Leeman Kessler, professional H. P. Lovecraft impersonator and mayor of Gambier, Ohio, said when asked about the elimination of “evil races” and the idea of moving away from race-based language and stereotypes in D&D. “I think the entire alignment system really needs rethinking.”

Others, though, don’t agree. Might we recommend not getting lost in the many, many replies on Twitter to these new changes.

“Some people are never going to want to give up on wanton murder of goblins,” Tolbert says. “I guess that’s up to them. If they’re worried about it, they can make the game work how they want; that’s the beauty of a roleplaying game. It’s collaborative and unique to each table.”