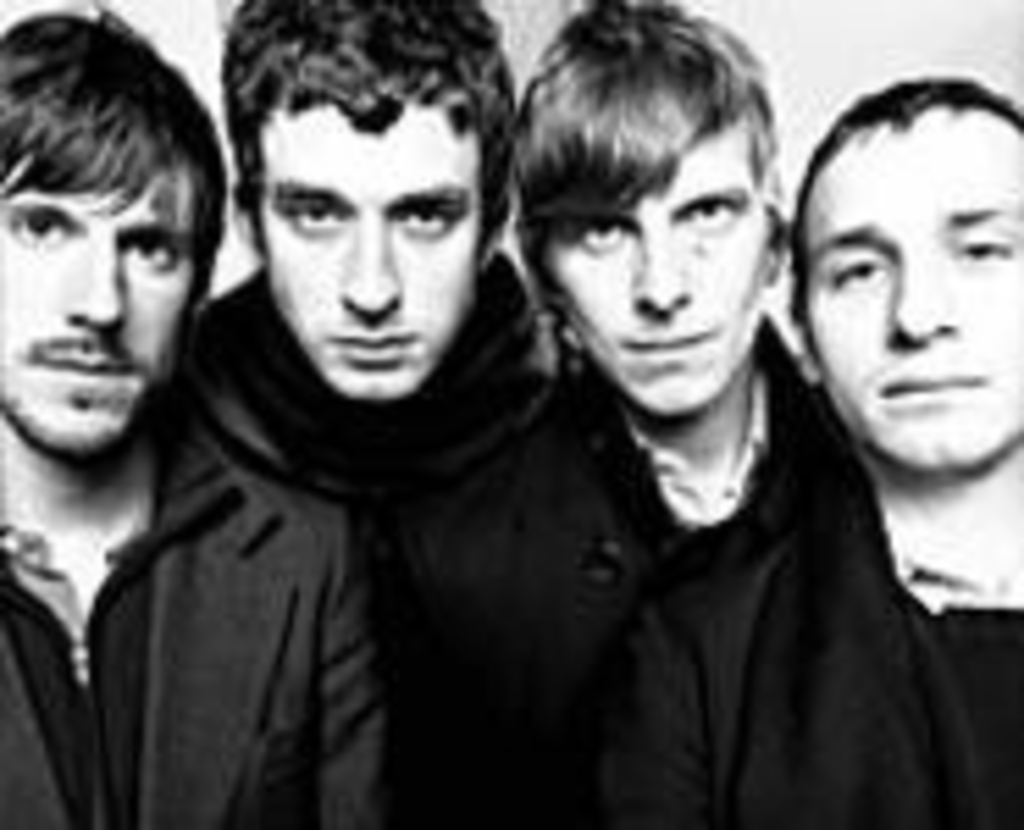 Beware the ugly lights. They come on after last call, when the weary bartender flips a switch. Just like that, the unforgiving, fluorescent glow of reality slaughters the dusky charm of your favorite joint. The desirables you’ve been checking out at the end of the bar are reduced to tragic boozers. The band members — who just minutes ago were the picture-perfect couriers of creative expression — are revealed as bag-eyed, unemployed, salty losers.

“Rock and roll and bright light don’t mix,” says Nick Stumpf. The gangly frontman of Brooklyn’s French Kicks is about to lead his band into a rocker’s worst nightmare: an outdoor, daytime gig under the most hideous of all lights, the sun. In the warm blush of the stage lights, Stumpf is a magnetic rock pinup, all arms and legs and strut. But in the daylight, he looks more like an art student who could use a sandwich.

“Outside gigs are not so fun,” Stumpf admits. He seems kind of scared. “The sound is just gone immediately. It’s just about impossible to really get into it.”

Cut to an hour later, and Stumpf is doing the impossible: really getting into it. The brightness of the late afternoon and the vacuity of the open-air gig do not have much effect on the vocalist’s animated carousing. As he flails around the stage, the guys behind him — Matt Stinchcomb and Josh Wise trading off on guitars and synths, Stumpf’s brother Lawrence on bass, and touring drummer Aaron Thurston — motor through songs from the band’s recently released The Trial of the Century without a hitch.

They start and stop on a dime, sing harmonies, play their asses off. Even though the audience of college kids is in the death grip of final exams, ultimately it’s won over. Two hours after the band strikes its last note, the entire performance is available for download on a local peer-to-peer server. Listening to it later, you’d never guess it was played in the ugly light of day. The band is all about surviving under scrutiny, and these days, it’s surviving a lot of it.

How’d French Kicks get here? Think back to 5 years ago to the spectacle that was the Brooklyn rock renaissance. Act 1 opened with the popular explosion of the Strokes, Interpol, the Yeah Yeah Yeahs, the Walkmen and Liars (to name a few). The laundry list of flavor-of-the-week bands that sprung from the 4.28-square-mile borough seemed endless. They owned magazine covers and “saved rock and roll” with a cocktail of ’60s punk (think Velvets) and ’80s panache (think Joy Division). That’s when the world was introduced to French Kicks.

The band was right in the middle of the parade and — like most of its contemporaries — saddled with nonsense descriptors: electroclash, post-no-wave, new new wave. But the kids gobbled that shit up, so by the time the curtain fell on retro rock’s first installment, the collective consciousness of indie-rock consumers had squeezed itself into one great big “I (heart) New York” T-shirt.

Like a politician getting some distance from a scandal, Stumpf downplays his band’s connection to its hometown’s hype.

“I don’t think location is that important, at least not to what we sound like,” he says. “But we really don’t think about it, either. We seem to be either traveling, playing shows or at home working on making records and doing our own thing.”

Maybe true. Last year Stumpf and his bandmates were always on the road, tallying up more than 100 shows. But the French Kicks are still lumped together with the rest of the Brooklyn scene, one that was founded on a stylized retro obsession. What about electroclash? What about the chicks who show up to the parties in leg warmers and want to hear OMD records? Stumpf answers with a been-there-done-that dismissal.

“That was really something that was happening a year ago,” he says.

He has a point. Over the past year or so, the buzz has waned. Many of the Act 1 luminaries are having a tough time keeping people’s attention. The Strokes’ sophomore LP was met with tepid reactions, Liars’ second was critically annihilated and most of the other heavies, such as Interpol and the Yeah Yeah Yeahs, have yet to deliver decisive proof that this sound has legs. What’s more, the borough’s late-coming stragglers, such as Ambulance LTD and Stellastarr, seem more interested in peddling 20-year-old Casio sounds than in writing anything that might last 20 years itself.

All of which brings us to The Trial of the Century, quite possibly the first bit of evidence that the Brooklyn hip parade will leave us with more than a few new hairstyles and a reintroduction to Joy Division. French Kicks’ latest is a clear indication that the band has a leg up on its brethren in making everything old new again. The 11 songs on the record are all shaded with nostalgic, new-wave affectation (heavy analog synth lines, archaic drum machines, etc.), but they never feel like fashion statements. The familiar materials are shaped in unfamiliar ways. It’s not like the band is reinventing the wheel — at its core, the record is verse-chorus-verse pop music — but at least it’s retooling the formula. At least it’s pimping our retro-rock ride.

The material on Trial — mostly written by Stumpf, alone or with Wise — isn’t in the ballpark of Interpol’s mope, Yeah Yeah Yeahs’ sneer or the Strokes’ poised disinterest. It’s curiously optimistic, lavishly arranged and at times even, ahem, sunny. It doesn’t sound anything like the New York we got to know a few years back.

The record opens with “One More Time,” a song that combines Stumpf’s expansive, harmonized vocal melody with double-time rhythmic underpinning (compliments of Stumpf again, who mans the drums throughout). The juxtaposition gives the party of scrawny Anglos an oddly soulful poignancy. The same trick — long, whimsical melodies over double-time beats — is behind most of the album’s standout tracks (“Oh Fine,” “Don’t Thank Me,” “Yes, I Guess”).

The problem here is the opposite of what bedevils French Kicks’ contemporaries: Sometimes the band just pushes things too far. Take “Was It a Crime,” a midtempo banger driven by a sampled timpani line and a pulsing synth trumpet. It borrows a couple of conventions from the pop canon — catchy choruses and harmonized layering — but if it’s a pop song, it’s a really weird one. Still, fumbled exploration is better than spineless predictability. Even with its occasional synth-trumpet headaches, Trial is a creative kick in the ass compared with most of the uninspired musical repackaging happening in the band’s ‘hood.

“There have always been one-hit wonders and bands that have endured,” Stumpf says. “We just wanted to … make a record that was lasting. How long you last depends on how lasting the stuff that you’re making is.”

Yeah, no shit. When it’s spelled out like that, it seems like a pretty obvious theory. But maybe it’s not. Maybe Stumpf should share this wisdom with the kids down the block. Most of them still seem to be in the dark.