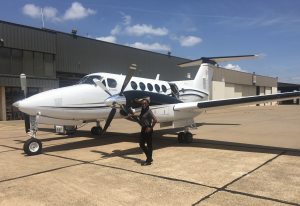 Less than 1% of U.S. pilots are Black women and Kansas pilot Susan LeGrand is a part of it. As International Women’s Month is coming to an end, LeGrand is a woman who deserves to be celebrated because she has had to overcome racial and gender-based obstacles to get to where she is today.

LeGrand was born and raised in Kenya. When she was a little girl her family took her and her cousins to an air show. It was presumed if any of the cousins would be a pilot it would not be LeGrand, the only female cousin.

“It was kinda assumed that it was my boy cousins that would be the pilots and I got a little bit offended by that even at my young age I guess and it stuck with me,” LeGrand says.

Although she wanted to be a pilot ever since she was a child, she started her career as an avionics mechanic at the age of 19 because it was too expensive to learn how to fly. Saying she had no ties back home due to her young age she made the move to the U.S. in her early 20’s after spending a few years working at Kenya Airways.

LeGrand’s brother was already in Kansas so she decided to come here too. In the U.S. she could pursue flight training while having a job at the same time but the move was overwhelming.

Kenyans have a softer mentality according to LeGrand. As she says, in the U.S. there is a “go go go” mentality that can be aggressive at times. It was a hump she had to get over but it helped her achieve her goals. LeGrand says people in Kansas are friendly and she has made lifelong friends but still misses home sometimes.

Moving is not the only obstacle LeGrand had to face in the U.S. Being a Black woman in a career field dominated by white men is not easy. People would assume LeGrand did not know English and would enunciate their words even if she did not give them any inclination to do so. Even to this day she picks and chooses her battles.

“It’s not a fight I need to deal with,” LeGrand says. “Let them do their thing.”

Imposter syndrome is often present in her life because she feels a constant need to outperform the men to prove her worth. She says she worked and studied harder so someone would not undermine her. Eventually, she got used to the fact that she would often be the only woman in the room.

LeGrand wants more women to go into aviation, especially Black women. She wants to emphasize women can have a family and be a pilot. Working for a major airline does not appeal to her but as a charter pilot, she still gets to fly and take passengers where they need to be.

Through all the challenges she has faced, LeGrand is a University of Central Missouri graduate and a Line Pilot at Air Associates in Olathe. She likes the lifestyle of her job because she has control over most things. There are superiors above her that she answers to but she says the job satisfies her need to be in control of her surroundings.

This job has allowed LeGrand to travel and she has been to all but six U.S. states. Family is important to LeGrand and flying allows her to spend a lot of quality time with her husband and daughter.

“My job has afforded me a quality of life that I could only have dreamt of before,” LeGrand says.