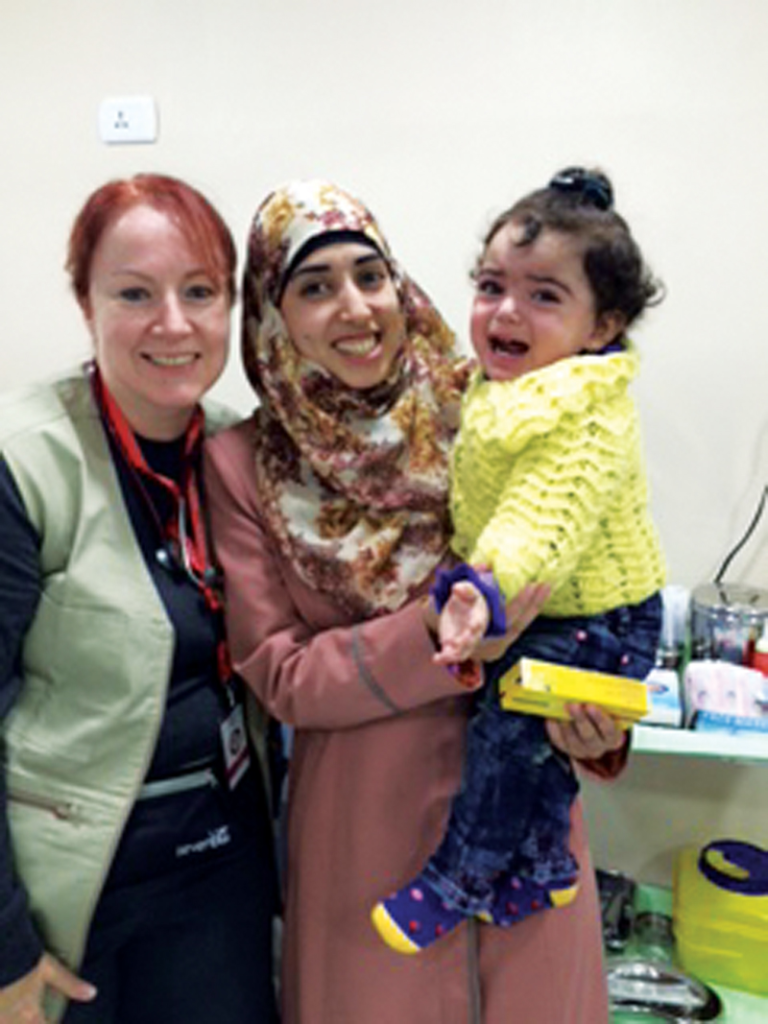 Just over a year ago, Laura Voss, a physician who lives in Lone Jack, traveled to Jordan and got herself within a few miles of the Syrian border. Like countless people around the world, she’d been moved by a singular image: a small child, lying on a beach, lifeless, washed ashore like driftwood. That photo has come to symbolize the crisis that has led to some 4.8 million Syrians fleeing their nation. Now she had come to treat as many refugees from that war-torn country as she could.

“I saw the drowned toddler, and it struck me so deeply,” Voss says. “And I remember telling my husband, ‘I am going to go help these people.’ I don’t know how, but I just knew it in my gut.”

Within a month, she had joined a group on Facebook called Physician Moms Group. One day, a woman posted to the page asking whether anyone wanted to travel to Jordan to help with Syrian refugees. Documented refugees total about 600,000 in Jordan — with some 600,000 undocumented refugees believed to have come into the country as well. Jordan has now closed its border. (Turkey has taken in nearly 2 million refugees.)

“I told my husband, ‘I’m going to Jordan to help with refugees — which was met with his jaw kind of dropping in shock,” says Voss, who works at Summit Family and Sports Medicine in Lee’s Summit. “Two months after I saw that picture, I was on the plane. I just knew that was the right thing to do.”

She signed up with the Syrian American Medical Society, which consists of volunteer physicians, nurses and therapists. Her church, New Springs, in Lee’s Summit, helped raise money for medical supplies and for her lodging. Summit Family and Sports Medicine paid her air fare. She traveled to the Zaatari camp, about an hour and a half from Amman and 8 miles from the Syrian border. It’s among the largest refugee camps, sheltering an estimated 80,000 residents, most of them in metal sheds. “It is surrounded by the Jordan army and by barbed wire, and there was no internal police force, so there was obviously crime,” Voss says.

In her six days at the camp, Voss helped care for refugees and Jordanians who needed medical attention; she says she concentrated on maladies like those she sees as a family-care doctor: “ear infections, bladder infections, diabetes, rashes.” Her roommate, from Romania, was a plastic surgeon and helped with burns and scar injuries. A nurse Voss worked with was a refugee herself, who had fled with her lawyer husband.

Voss says she saw 82 patients over about five and a half hours one day, the process speeded along in the absence of billing or insurance paperwork. This was doctoring in its purest form, she says. “It is just part of our nature to want to nurture to heal. In some ways, when we do mission work, it makes us feel like we are doing what we were called to do. And we find out that we can provide a lot of care to a lot of people very cheaply.”

The day I interviewed Voss, late last year, happened to coincide with a frantic surge in videos and tweeted pleas from Aleppo. People who were trapped in the Syrian city were begging for the rest of the world to pay attention, for world leaders to somehow intercede. What had begun as a small uprising five years ago had culminated in a civil war costing 300,000 lives and displacing 11 million people — half of Syria’s population — according to the United Nations. The United States had stayed out of the conflict for the most part; Russian President Vladimir Putin, an ally of Syrian President Bashar al-Assad, was assisting the effort against the rebels.

Voss, informed by her experience at Zaatari, was upset.

The SAMS organization through which Voss served still has staff supporting hospitals, making trips frequently to Jordan. “I’m still in contact with them,” she says. “I’ve seen live video of hospitals being bombed as they were taking people away [to be cared for].” 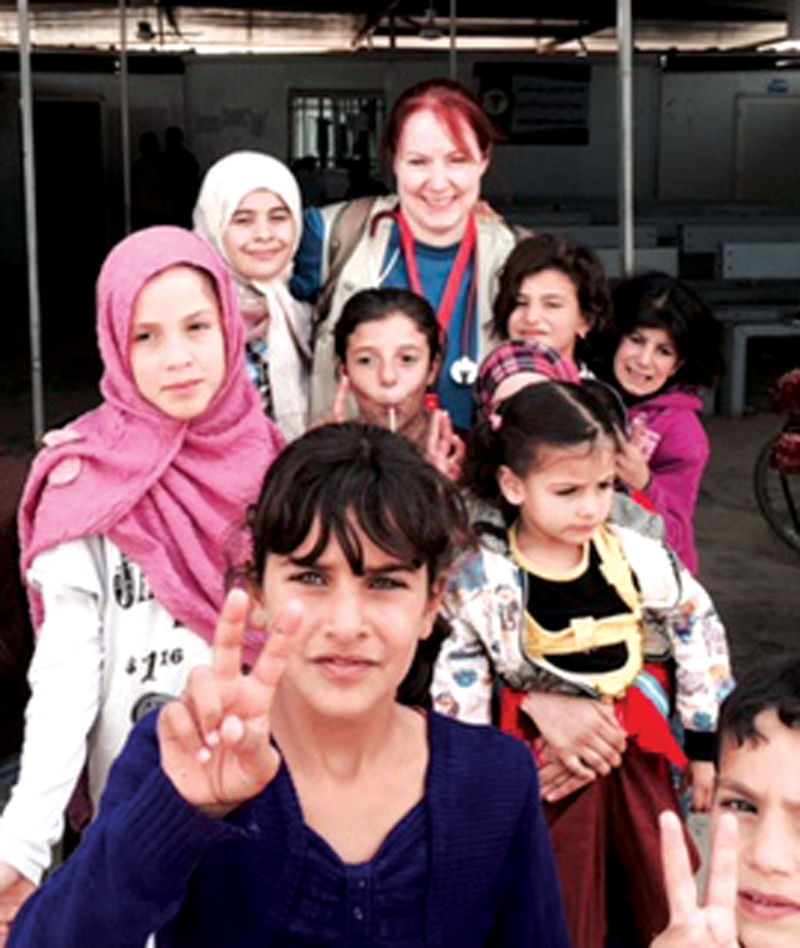 She goes on: “There was a Syrian representative to the UN saying, ‘Nothing to see here. We are just fighting terrorists like the rest of you.’ And I’m thinking, those people are tweeting live from the region and they still have cell phone service. And everyone that I know there, that has contacts there, is saying that that is not true, that civilians are being targeted. And that is what the pattern has been over the last five years, when doctors, nurses, ambulance crews, hospitals, civilians have been specifically targeted, by Russia as well as by the government of Syria.”

Meanwhile, efforts to resettle Syrian refugees in the United States remains slow, and is unlikely to improve under a Donald Trump administration.

Three area organizations are among those trying to relocate refugees, including those from Syria. Jewish Vocational Services, Catholic Charities and Della Lamb have placed almost 30 Syrian families in the Kansas City metro.

Fariz Turkmani, a volunteer who works with Della Lamb and owns Tess limousine service, helps the refugees get situated and find transportation (donated or shared vehicles) so they will be able to work more easily. The refugees do not want to be dependent on others, he says.

“One thing with the Syrians is that they don’t want to draw public funds,” agrees Abdul Bakhar, director of the refugee-resettlement program at Della Lamb. “All of them except the newly arrived have jobs and have an objective to be self-sufficient. They really are thankful to people and the heart to heart [help] from the community of Kansas City.”

Voss wants people to understand that refugees like those who have made it here are victims, not enemies.

“All the election stuff and banning immigrants and all that nonsense — we just have to remember there are things in place to screen refugees,” she says. “We should never ban any person based on religion and all the backlash against Muslims and the refugees. I have called on all my Christian friends, and we will be the first ones there if there is a Muslim registry.”

Voss, who grew up in Jefferson City and went to the University of Missouri-Kansas City for undergraduate work before attending medical school at the Kansas City University of Medicine and Biosciences, has volunteered at the Sojourner Health Clinic for homeless and underserved patients. She does presentations occasionally on her work, and says that some people she has met in these settings have questioned her desire to go overseas. She says she has been asked why she doesn’t, for instance, focus on helping homeless veterans.

“And my response to them was, ‘Yes, what are you doing to help homeless veterans?’ ” Voss says. “They aren’t mutually exclusive.”

She goes on: “My husband and I always talk about what we be doing if we lived in Civil War times. Would we be abolitionists? What would we be doing in the civil-rights era? Would we marching with Dr. King? I feel like this is the same thing. Where do we stand in history? Will we stand with the right side of history? Will you tell your grandchildren that you welcomed refugees? That you would fight for their rights even if they are not the same religion as you? We want to say we were there.”