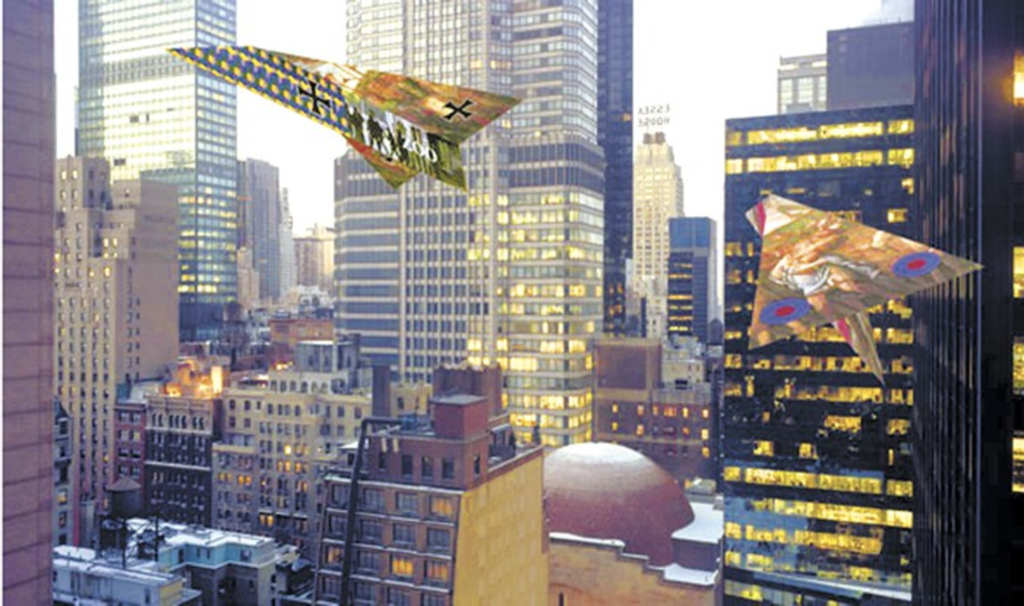 Kansas City artist Gary Sutton‘s refined exhibition of digital photographs at Jan Weiner both pleases and frustrates. Ultimately, it results in a visual and conceptual irresolution.

Sutton is an excellent photographer whose body of work is a broad and respected one. He’s been a faculty member at the Kansas City Art Institute since 1975 and has participated in many group and solo exhibitions throughout the United States. Typically, his photographic work combines different places and times. The Queen’s Suite consists of flawlessly designed, digitally mixed images of striking modern and old buildings, New York City skyscrapers, outdoor scenes and other mostly exterior spaces — and the paper airplane that glides through each image.

As a recurring element, the plane unifies the 11 images and helps create an attractive exhibition. But therein lies the trouble.

Superimposed on the paper airplane are images from The Triumphs of Caesar, a series of paintings by the 15th-century Italian artist Andrea Mantegna, who was a court painter for the ruling Gonzaga family. Painted in honor of Francesco Gonzaga, a soldier, the nine-canvas series is now part of the British Royal art collection (thus the title of Sutton’s exhibition). Mantegna’s paintings on the planes would be recognizable only to alert art historians; viewers without this context are likely to wonder about the subtext.

The planes are embellished with other war references, too, such as a German Iron Cross and a World War I roundel. We might assume, then, that Sutton’s images comment on war — on our current war, on wars in general, on military might, on empire building (or destroying). OK, but these visual cues are coolly detached. The tension between elegantly crafted digital images and what they seem to suggest does not add up to a meaningful war commentary. Instead, the work becomes more decorative than emotionally engaging.

Sutton’s titles keep asking us to think about war and the history of warfare and its awful toll. For instance, “Werner Voss Appears in Dresden” obviously refers to the World War II firebombing that virtually destroyed that German city; Werner Voss was a famous fighter pilot during World War I. The image is peaceful, with the glider reflected in the windows of a beautiful old building. In “Blue River, Okinawa,” the plane’s wing creates a visual airstrip connecting the viewer to a red bike juxtaposed with an expanse of blue river and its green banks. At the same time, we know that the Battle of Okinawa was one of the largest and bloodiest of the Pacific during World War II. These images don’t underscore their titles; in fact, they undermine the titles — or, worse, seem to mock them.

Can a title be expected to do heavy work for the image? I don’t think it can, or should. But in this case, viewers will probably keep looking to the titles for help in resolving too many questions about Sutton’s intent and meaning.