Pho Hoa is off the chain 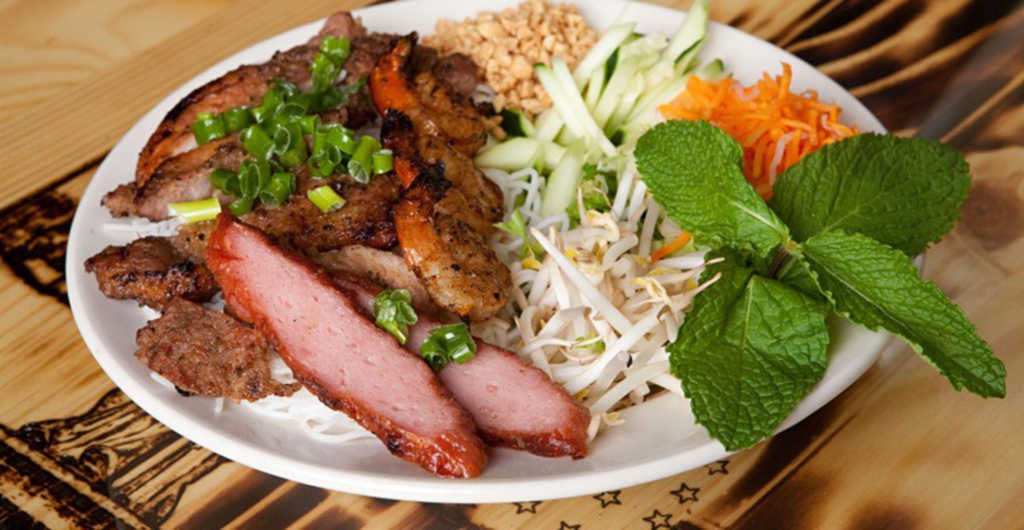 The 40-year-old entrepreneur from Vietnam wanted to go into business by himself — he used to run a burger place in Houston with his brother — and he was impressed by the operation of the Sacramento-based Pho Hoa Noodle Soup chain. After Nguyen moved to Kansas City, he bought the franchise rights for the metro.

“People don’t think that this is an independently owned restaurant because there are other Pho Hoa operations around the United States,” Nguyen says. “But this is my restaurant. I don’t follow corporate guidelines. I do things here my way.”

If Nguyen sounds a little testy, it’s because he has heard people dismiss his two-month-old, full-service dining spot as another slick, corporate-owned operation that has entered the local market to trounce family-owned places, such as the Vietnam Café or Saigon 39.

“This is my family-owned restaurant,” Nguyen says. He has been putting in long hours with his wife, Jissie Vo, and their teenage daughter, Valerie.

Having eaten in the restaurant three times now, I’ll say this: Pho Hoa is neither the Vietnamese Chipotle nor another Panda Express. If you didn’t know, going in, that this cheery joint was a franchise, you probably wouldn’t guess it. Nguyen’s restaurant is as eccentric as any other small Asian place in the area, though it’s run more smoothly and with better service.

The meals here — soup bowls, rice dishes, bánh mì sandwiches — don’t come off as soulless corporate creations, either. In fact, Nguyen has already changed many of the recipes that came with his franchise agreement because he says the local Vietnamese community prefers lighter broths and better seasoned pho. “So that’s how we prepare them now,” he explains.

The name Pho Hoa is a combination of pho for noodle soup and hoa for Binh Hguyen, the immigrant restaurateur who opened the first Pho Hoa noodle shop in San Jose in 1983 — hoa binh means peace.

Nguyen wanted to open his first Pho Hoa — it’s pronounced fuh wa — in the historic heart of Kansas City’s Vietnamese community: the old Northeast. After looking at several buildings up and down Independence Avenue, Nguyen made a decision that seemed inexplicable but turned out to be practical. He leased the rear of the brick structure at 1447 Independence Avenue that had been occupied by the Scimeca family’s supermarket for more than a half-century.

The front section of the building is now the home of the Biladu Rahlma Mid-Eastern Restaurant. Which makes it hard to know that Pho Hoa is also there, especially when it’s easy to drive right past the building. No sign is visible from the street, but Nguyen says he’s working with the city to change this.

Walking into the restaurant generates some culture shock. This stretch of Independence Avenue is mostly forlorn, even if the Kansas City University of Medicine and Biosciences is across the street. The college was another reason that Nguyen chose the location: “College students love pho,” he says. “I knew they could be a built-in audience.”

Each time I’ve eaten at Pho Hoa, the cool, jade-colored dining room has been full of Vietnamese-Americans, including a lot of 20-somethings. Nguyen favors a youth-skewing soundtrack featuring the latest pop hits from Ho Chi Minh City, and his place is a brightly packaged Gen Y incarnation of the mom-and-pop Vietnamese restaurants that once dominated this street. Viet Hoa is now closed, and the beloved Pho 97 has yet to reopen after a fire destroyed the adjacent Vista Theatre building last May.

Nguyen designed the interior himself. Corporate mandates a minimalist approach, but the Independence Avenue Pho Hoa is a shade fussier than that — something between P.F. Chang’s and Pier 1.

It’s comfortable, though, and casual enough for a group of Vietnamese-American college students to giggle together at one table, a young man to rub the belly of his pregnant wife at another and, at mine, a Southern gentleman named Truman to expound on the merits of an avocado smoothie.

“I know it sounds dreadful,” he said, taking long sips of the pale-green shake from a plastic cup, “but it’s really creamy and delicious. Not too sweet but not savory, either. And refreshing.”

It’s also the most-ordered beverage here, far outselling the strawberry and mango versions. Pho Hoa doesn’t serve booze, but it offers plenty of the traditional caffeinated, sugary concoctions so well-liked in Vietnam: café den dá, iced coffee (made with half and half instead of the usual sweetened condensed milk), and iced and hot teas.

You can get a glass of regular old unsweetened iced Lipton, too, which is a divinely cool asset when you’ve ordered one of the terrific, spicy bánh mì sandwiches here, all prepared with fresh jalapeños. I’m crazy about the “house special” sandwich, made with sliced-pork “meatloaf” — it looks like pale lunchmeat, but don’t let that stop you — charbroiled pork and beef, julienned carrots, peppers and cilantro on a marvelous baguette. It’s cheap, too.

The rest of the Pho Hoa repertoire isn’t so unsubtle, although the pho bowls are served with a plate of fresh herbs (cilantro, mint, basil) and sliced jalapeños for seasoning the dish to one’s taste. The beef broth — the soul of this signature dish — will taste a shade sweet to some, but I think it’s just right: lightly gingery with notes of anise and cloves. Delicious.

I’ve indulged myself on several of the house rice plates, mostly topped with marinated meats and fragrant with lemon grass (including the most lusciously tender pork chop I’ve eaten in a long time). One of Nguyen’s signature dishes is “Shaken Beef” (some restaurants call it “Shaking Beef”): succulent hunks of marinated beef, wok-seared with onion slices. (Nguyen won’t reveal any of the spices, but garlic, soy, fish sauce and a dash of sugar resonate among the flavors.) It’s as close to barbecue as you can get at Pho Hoa.

Not all of the restaurants in the Pho Hoa chain offer appetizers, but Nguyen makes light, fresh summer rolls that are plump, chilled creations made of vermicelli, pink shrimp and herbs wrapped in rice paper. He serves them with classic nuoc cham dipping sauce: fish sauce, garlic, lime juice. (It’s also worth asking for Nguyen’s warm peanut sauce.) A heartier, equally delicious roll is made with roasted pork instead of shrimp; another comes with grilled pork and bits of fried-egg roll wrapper, producing an unexpected crunch. Pho Hoa’s most popular starter, unsurprisingly, is a hefty plate of bánh tôm cô ngu: sticks of sweet potato and pieces of shrimp, battered together and deep-fried to a feathery but satisfying crispiness.

There are no fewer than 16 toppings, all meat, ranging from brisket to tripe, available for the pho bowls (in two sizes, the larger of which is enough for two meals), and there’s a hot-and-sour seafood version with squid, salmon, shrimp and chopped pineapple. (A vegetable broth is available upon request, but the menu is not vegetarian-friendly.)

Because this is a fast-casual chain, all the dishes arrive on hard plastic plates emblazoned with the corporate logo. Nguyen spent his first years in Kansas City living in the Northeast, but he moved to Johnson County several years ago. He plans to open at least two more Pho Hoa restaurants here. Will he have to change the recipes or upgrade the dishware for that demographic?

“We’ll see what happens after we open,” he says. “There’s a Vietnamese community in the suburbs, too. Right now, they’re driving here to eat, so I think they like what I’m doing.”

Why wouldn’t they? Pho Hoa is a fine culinary addition to Kansas City. Just try to forget that it’s a franchise.