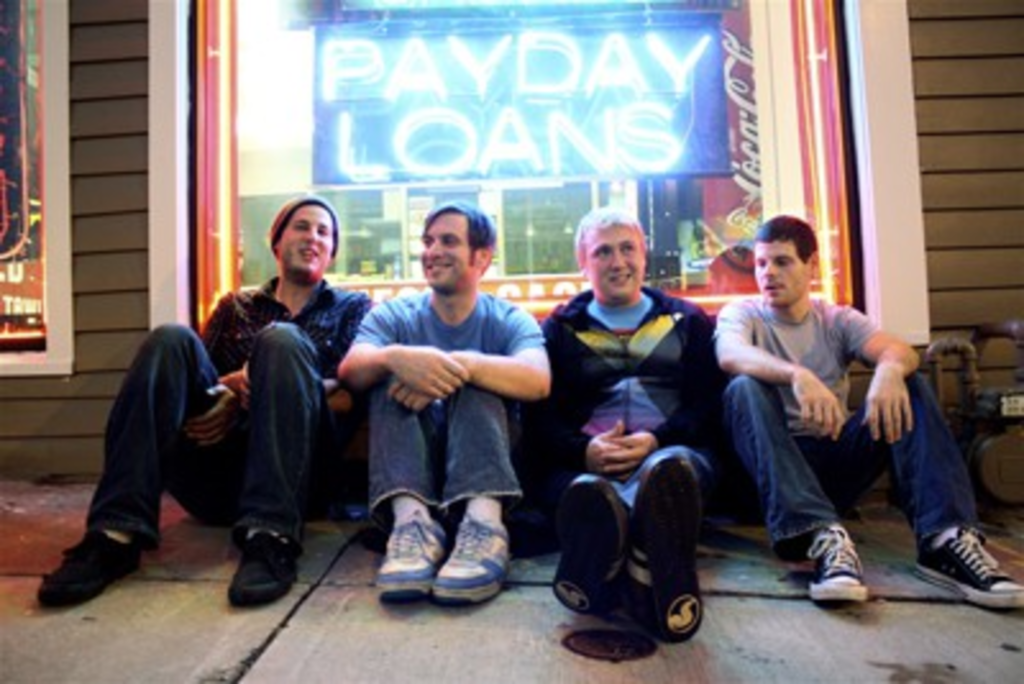 If you really want to get the members of Pet Comfort riled up, start a conversation about ’90s rock.

Like so many other bands, the Kansas City group bonded over a shared love for Weezer — well, the first couple of albums, at least.

But that’s where the agreement ends.

“I read that meditation was helping him [Weezer frontman Rivers Cuomo] get in touch with his inner songwriter,” drummer Jason Trabue says. “I was like, ‘Really? That made you write “Pork and Beans”?'”

Of all the members of Pet Comfort, Trabue probably has the highest tolerance for Cuomo’s teenager-appeasing, million-selling output of late.

“The dude isn’t writing anything that’s great anymore, but I give him credit because he’s writing songs that generate a sick amount of money,” Trabue says. “Get what’s yours and have a great life. I’m A-OK with it.”

While the other members of Pet Comfort roll their eyes in disbelief, Trabue remains firm in his stance. His balanced assessment of Weezer’s lamentable trajectory likely has something to do with his experiences in the music business. As a touring drum tech for bands such as Thrice and Chiodos, Trabue saw the potential for a group to gross $500,000 on a tour — and bleed away $380,000 of it on extra buses, hotel rooms and party favors.

“All these bands that were on Warped Tour would be like, ‘I’ll give you $100 to tune my drums,'” Trabue says. “It took longer to walk over to the stage than to tune some kid’s shitty-ass drums.”

Presently, Pet Comfort is in no position to piss away money or goodwill. The young band formed less than two years ago and is a lot like other new local acts, with one major difference: The members sound like they’ve been together for years. The group’s Paperdolls EP would fit right in if KRBZ 96.5 (the Buzz) spun it on its Nineties at Noon program. In fact, you might even call the station to see how you could have missed it the first time.

“It came from a rest stop on I-70,” singer and guitarist Drew vanDyke says. “I thought it was nice that they chose that name and not ‘Dog Poop Area.'”

Evoking acts like Weezer, the Rentals, Smashing Pumpkins, and Hum, the musicians of Pet Comfort are comfortably channeling the music they came of age with. If you’re in your late 20s, you might just have a flashback to senior prom.

“That’s how we became friends,” says Trabue, who has known vanDyke and guitarist Luke Baker since high school. “It was like, ‘Dude, you like Weezer? Me, too!’ All the great bands outside of the Beatles and Led Zeppelin that we listen to are great ’90s bands.”

“It was kind of awful sometimes,” Baker says of Cruxed. “We needed to stop playing crappy metal riffs and write songs that people besides just us would like.”

According to vanDyke, the crux of Cruxed’s problem was writing songs that were too esoteric for a first-time audience.

“I don’t think people got the weird chord changes and structures,” he says. “It was sort of a musician’s band, except we’re not that prolific. It was like half-prog, and no one cared.”

In a sense, vanDyke’s scatterbrained songwriting sensibilities carried over to Pet Comfort — they just became a lot poppier.

“Drew’s not a big fan of repeating things,” Trabue says. “Sometimes I have to force him to repeat a chorus. If we let him write a double album that was one song, I’m sure he would do it.”

Pet Comfort has made it a priority to get involved with the KC scene before worrying about things on a national scale. Trabue, in particular, waxes nostalgic on the local scene of 10 years ago.

“I kind of miss that spirit of wanting to take care of each other,” says Trabue, who played drums for Vedera (then Veda) circa 2005. “An example would be the Casket Lottery. They were all about bringing the other bands in the city up with them.”

That very sort of thing will happen to Pet Comfort October 3 when it sets the stage for Coalesce at the Riot Room.

“That’s an example of the old-school spirit,” Trabue says. “It’s an insane hardcore band, and they want us to open.”

Pet Comfort is hoping to have a new keyboardist lined up by then — former ivory tickler Anna Kemp is moving to California when her husband, Tim, comes back from Iraq. Trabue posted a comical musician’s ad on Craigslist that read: “Cute Keyboardist Wanted for KC’s Premier Indie Pop Band.”

He’s not that optimistic.

“Craigslist is a pile of shit,” he says. “Honestly, anybody who responds to it probably is the opposite of what we’re looking for.”

Unless, of course, it’s Rivers Cuomo.