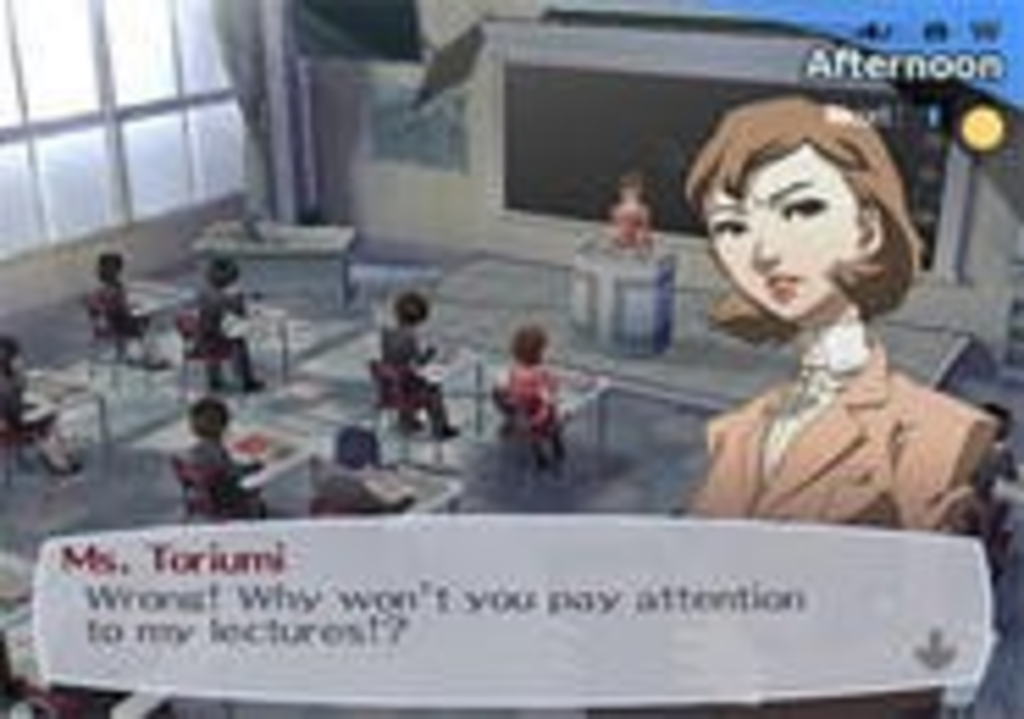 The next-gen consoles are sexy as hell, but it’s not all bad being the reigning “last-gen” champ either. With more than 100 million PlayStation 2 consoles sold, software companies can afford to be a little adventurous — after all, even if their game appeals to only 1 percent of that audience, it’s destined to be a smash. That’s why some of the most unique games appear near the end of a console’s life cycle, when developers can take a few chances and try something different.

Shin Megami Tensei: Persona 3 is a great example of this, destined to be remembered in “Best Role-Playing Games for the PS2” lists for years to come. This relentlessly unique RPG has the vibe of great anime, a snappy, addictive battle system, weeks’ worth of content, and — most important — one of the most bizarre, thoughtful, and enjoyable plots around.

Here’s the premise: As a student in a Japanese high school, your days are spent like those of any other teenager — going to class, making friends, hanging out at the mall, or maybe playing sports after school. By night, though, you’re a member of a special club of gifted students who hunt demons known as “Shadows.” Each night the group ventures out to push the Shadows back a little farther, as best you can before it gets too late. It is a school night, after all.

Each member of the team can conjure up spiritual allies, known as “Personas,” which are released by pointing a mystical firearm (an “Evoker”) at one’s temple and pulling the trigger. The Personas themselves are plucked from everything from Egyptian myth to European folklore to the Bible. This makes the game’s combat a spectacular and somewhat disturbing sight, with teenage characters blowing their psychic brains out over and over to release unicorns, Hindu deities, and maybe even St. Michael into the fray. And it all takes place in a blur: Most battles are over in less than a minute, thanks to the game’s finely tuned, brisk combat system.

To top off the strangeness, Persona 3’s picture of high-school life is, simply put, extremely Japanese. Whether it’s the odd holidays (no school during Golden Week!) or the notion that paying attention in class and answering all the teacher’s questions correctly will make you more popular, there’s a lot for Westerners to find alien.

If you look past all that — the suicidal imagery, the smorgasbord of religious icons, the school on Saturdays — you’ll see something remarkably genuine about this fantastical war between high-school kids and the powers of darkness: Teenagers grappling with issues the game’s adults seem oblivious to, fighting their demons on a battleground that’s an eerie, nightmarish version of the school they attend by day. And your only hope, it turns out, is the group of friends you’ve surrounded yourself with; strengthening those relationships — whether by helping someone study or talking to them when they’re down — enhances your ability to fight off the darkness.

Quoth Keanu: Whoa. Not a bad break from slaying dragons and shooting aliens.

Film critic Roger Ebert recently drew the ire of the gaming community by asserting that video games aren’t art. In truth, most of them probably aren’t. But some games — the kind that tell a story through metaphor rather than kinetics, the kind that tell us something about ourselves, the kind that make us feel — are hard to define as anything but art.

And yes, Roger, Persona 3 is one of those games.