Peering into Oracle for tarot and taxidermy 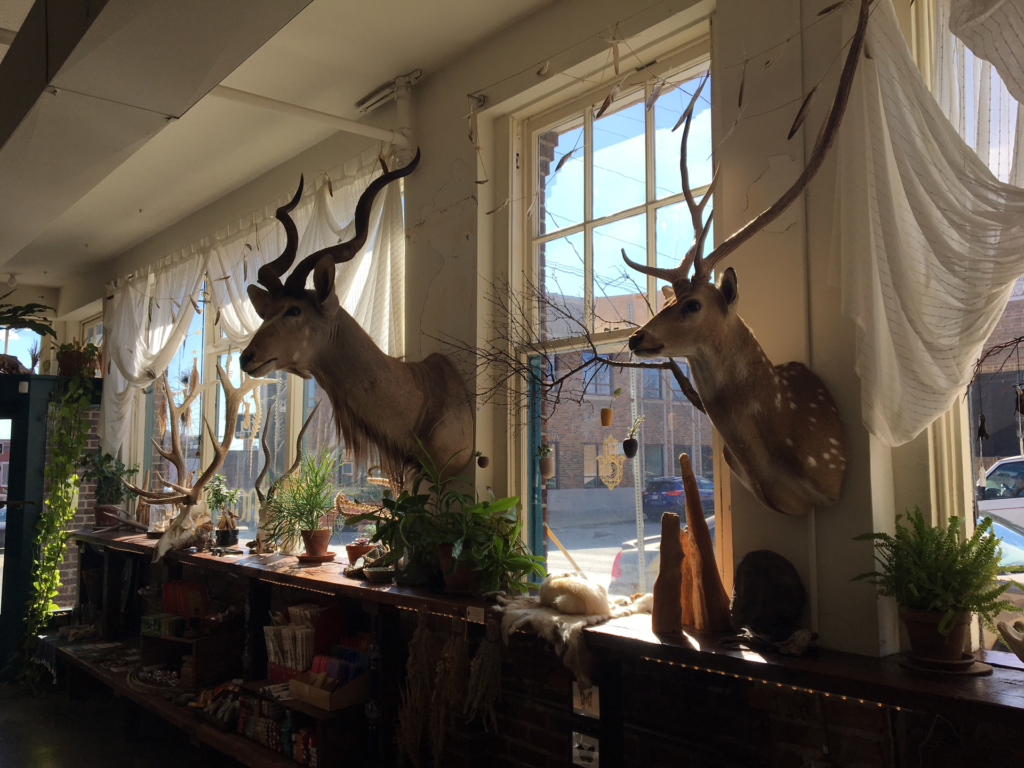 “We have a bat guy,” Jane Almirall tells me. I’m browsing the shelves at Oracle, and I’ve just come across a small tree, on which taxidermied bats hang like Christmas ornaments.

But her answer to my question — where did you get these fuzzy critters? — raises still more questions. For one: Where does the bat guy get the bats?

But then, Oracle is made of conversation starters. Row upon row of animal skulls, for instance, with chickens and turtles among the represented species. There’s jewelry made from crystallized cicadas. There are tiny glass jars filled with stones said to bolster various self-improvement efforts.

I’m here for the shop’s “tea and tarot” event, which is exactly what it sounds like — Almirall offers everyone who enters a cup of hot green tea and the opportunity to sign up for a $10 tarot reading. The cards have never successfully swayed me, but I never stop hoping that they exude actual prescience, that they’ll reveal some secret that will guide me toward a six-figure salary or momentarily decrease my anxiety. I add my name to the tarot list and take in some of the store’s intricate displays while I wait. 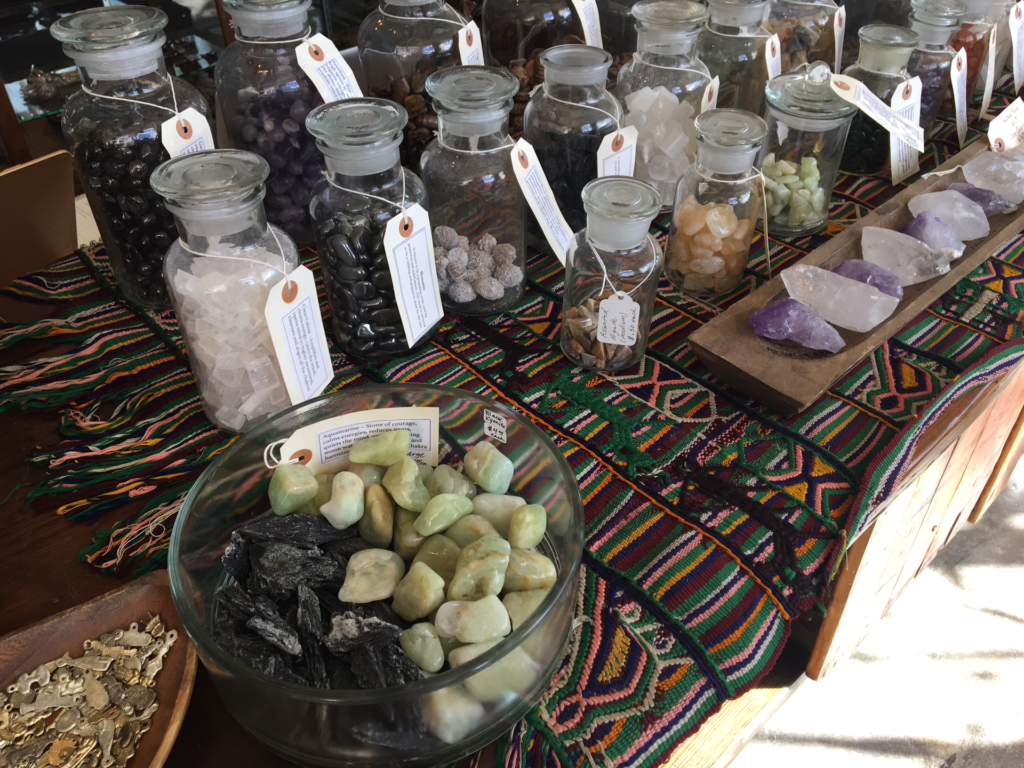 There’s a lot to see. Founded in 2013 by Almirall and Carrie Parker, who were joined shortly thereafter by Alessandra Dzuba, the Crossroads retail shop celebrates, the women say, “the odd, the beautiful and the bizarre.” The second time I visit, all three women are behind the counter, looking radiant as the afternoon sun spills into the room and a curtain of incense hangs on the air. I’m still eager to learn more about the taxidermy on display, an impressive collection that includes a fox, a porcupine puffer fish, and a deer that surveys the room from atop a large armoire. Again, I ask Dzuba: Where does it all come from?

“We work with local farmers and conservationists,” she tells me. “It’s all ethically sourced. The whole animal gets used, so nothing goes to waste. Some have been attacked by animals or were nuisance animals to farmers. The ostriches come from a place where they raise them for meat. But the newer taxidermy is all natural death.”

Having assumed taxidermy to be among the more brutal art forms, I find this information nothing short of revelatory. And it’s a relief to consider that these creatures are being appreciated after death — a thought I recognize as unusual for me, considering my husband is just a few green beans short of being an obligate carnivore. Turns out, Oracle is the kind of spot that thrusts you headfirst into unexpected gratitude; I’m oddly grateful to see a shelf lined with small mammal skulls. 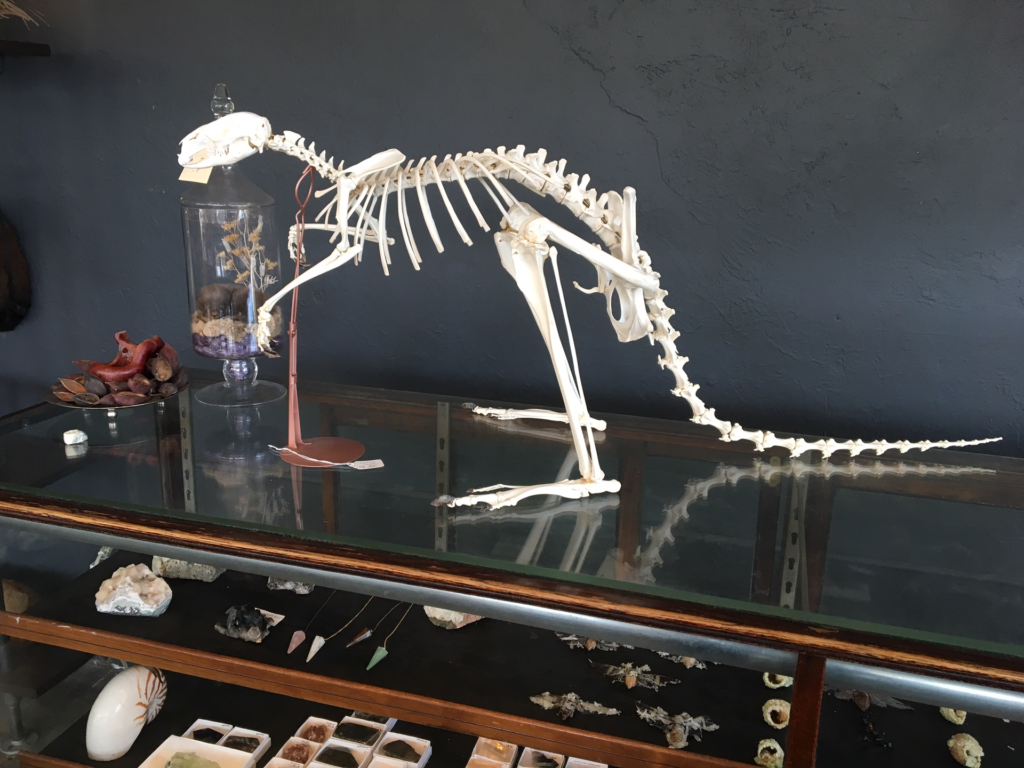 “I have a real soft spot for bad taxidermy,” Almirall adds, leading me across the room to a pair of bug-eyed baby skunks perched on a log. “They were made by a grandma who taught herself. I’ll be crushed if anyone buys them.”

She says this in a way that conveys real respect for someone who would attempt to skin and preserve an animal with zero formal training and only slightly more skill. In fact, Almirall knows firsthand how hard it is to produce good taxidermy. She recently took a class (she loved it, she says) and found it more challenging than other crafts she has attempted. In addition to her taxidermy training, Almirall is also Oracle’s stone expert, able to explain the metaphysical properties ascribed to each shiny artifact.

“When we construct talismans, we think about what people want to bring into their lives,” she says of the objects, which she calls “support tools.” She adds, “Sometimes you’re drawn to a stone and you don’t know why.”

As I peruse the jars, I pause on one containing sodalite, a shiny blue rock that purportedly helps with communication and conflict resolution — a boost I could really use. Though many people are skeptical of the stones, Almirall tells me she’s always had an easy time believing in alternative sources of guidance. 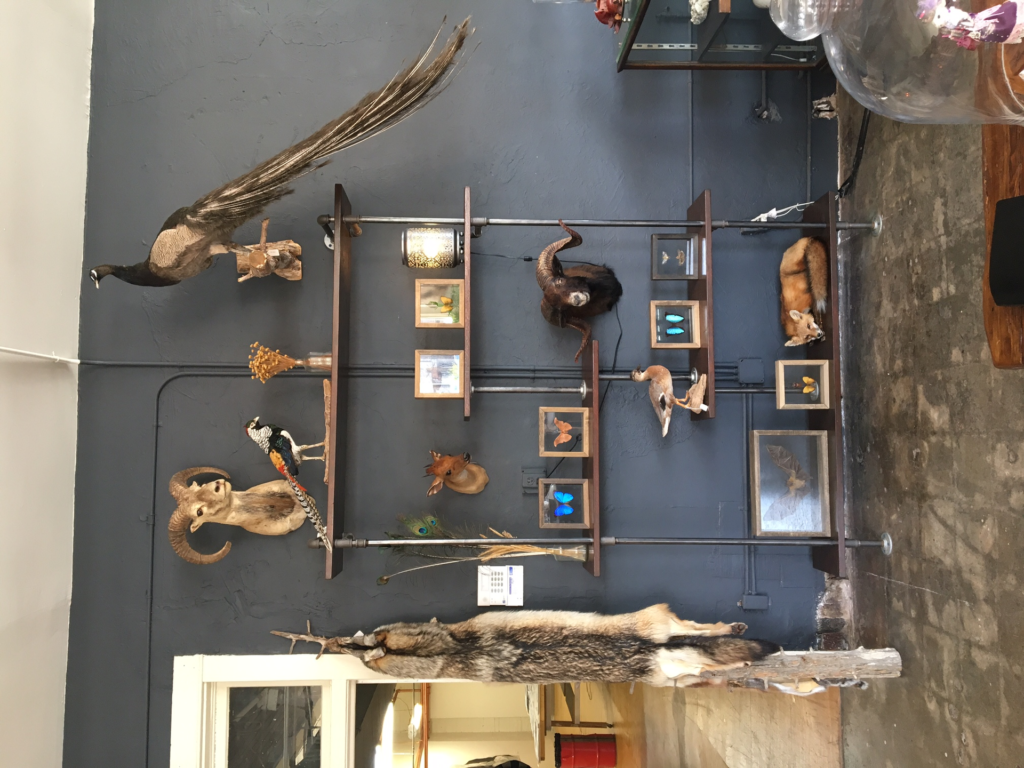 “All kids are born with this witchiness,” she tells me. “We’re drawn to plants, animals, moonlight — we have vivid imaginations. Then it kind of gets stomped out of you as an adult.”

Oracle is definitely the place to rediscover your inner mystic. Each of the women plays a vital role in keeping the shop wonderfully witchy. One of Dzuba’s specialties is insect spreading — the beautiful butterflies and moths you often see flawlessly displayed in frames. She tells me she’s been doing it since she was 5, when she used to keep specimens in her parents’ freezer. She’s also “in charge of all the bones,” she says, a phrase I think belongs on her business cards.

Parker is a psychologist who specializes in intuitive counseling, as well as numerology and astrology. Her practice, Sacred Psyche, shares a space with Oracle.

As for that tarot reading on my first visit: The cards assured me that, even though things are hard now, they’ll get better soon. That’s the kind of message easily dismissed as vague and impersonal, but I felt charged by it. I grabbed a handful of sodalite on my way out.