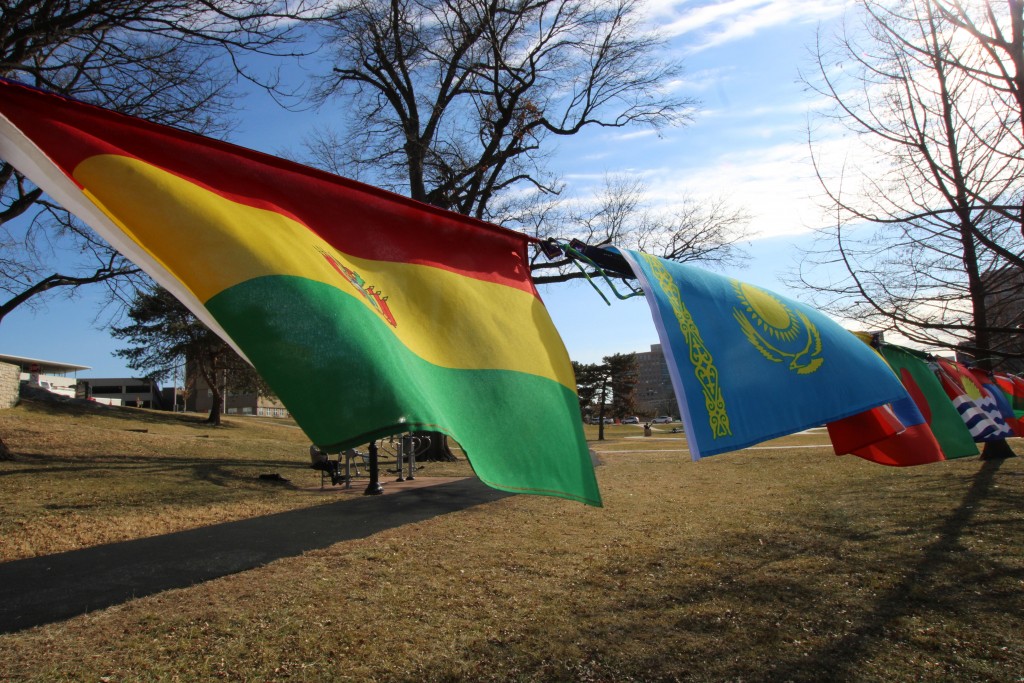 Flags for each country that ratified the Nuclear Weapons Ban fly at the Peaceworks rally.// Courtesy of Jim Hannah

51 countries—including Austria, Thailand, New Zealand, and Ireland—have recently signed and ratified a U.N. treaty outlawing nuclear weapons. The weapons ban is largely symbolic at this point, as none of the nuclear weapons holding powers signed the treaty, but now international law. Supporters of the ban are hoping that pressure from those 86 countries that signed the treaty and 51 that ratified it will lead to more countries joining. This added pressure, advocates contend, will pressure those countries—the U.S., North Korea, the U.K., Russia, France, China, India, Pakistan, and Israel—to disarm and eventually ban their weapons as well.

The Treaty on the Prohibition of Nuclear Weapons will come into force this week, which represents an encouraging and meaningful commitment towards the UN's highest disarmament priority.

Learn about the importance of this landmark treaty: https://t.co/673U0CnAWn pic.twitter.com/DuWVOU7TkH

This ban has the potential to affect Kansas City specifically: there’s a large nuclear weapons parts plant, Honeywell’s National Security Campus, off of Highway 150. Peaceworks KC, an organization that fights for a world without war and its weapons, held a rally to celebrate the ratification of the treaty Jan. 22.

About 60 people attended the rally that was held on the Plaza. At the rally, key members of Peaceworks and Physicians for Social Responsibility spoke about the danger of nuclear weapons and their hopes that this ban leads to disarmament in the nine countries that hold nuclear weapons.

While none of the countries that have nuclear weapons signed the treaty, members of Peaceworks are confident that it will help turn the international tide against nuclear weapons.

“But that doesn’t mean it won’t affect them,” said Ann Suellentrop, project director of the Kansas City Chapter of Physicians for Social Responsibility. “Every country will feel the moral force of the Treaty, and there will be financial pressure on the 36 multinational companies in the states that have ratified the treaty. All nuclear weapons, including the 3,900 in the U.S. stockpile, have been declared unlawful by the international community.”

Suellenstrop further demonstrated how this treaty could affect the U.S. even if they never sign it.

“Honeywell has a factory in Mexico that makes air conditioners,” Suellenstrop says. “Mexico could pass a law that prohibits government or private financial support for the factory. It could prohibit Mexican citizens from working at the factory. And if the Honeywell CEO visited the factory, he could be arrested. International treaties affect the U.S. even if we don’t sign them. For example, we didn’t sign the landmine international treaty, but no company in the U.S. makes landmines anymore.”

Flags for each country that ratified the treaty were prominent at the rally, as well as posters and banners saying nuclear weapons are illegal and dangerous to all life.

While it will likely take a long time to see any changes in the U.S. come from this treaty, the weapons ban provided people all over the world, and here in Kansas City, with some hope