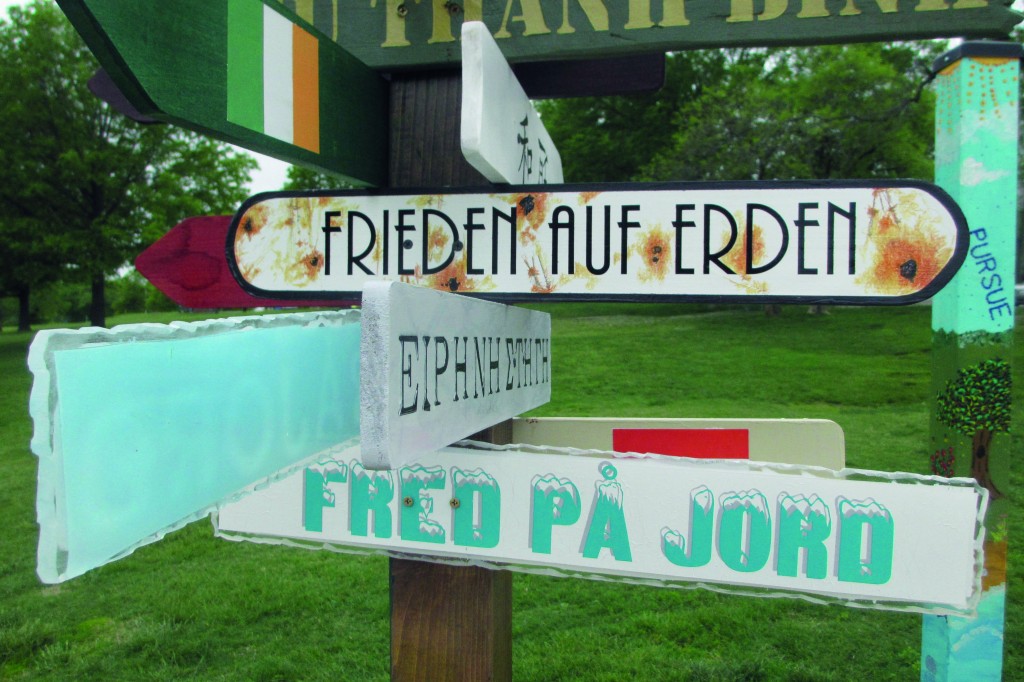 Andy Handwork won the best in show award for this pole, featuring signs that read, “Peace on earth”, in a variety of languages. // Photo by Beth Lipoff

Missing the colorful buds of spring and need a spot of brightness? A new vibrant community art installation aimed at sharing messages of peace is dotted in pockets around Lenexa’s Sar-Ko-Par Trails Park. The Peace Poles project features 37 eight-foot-tall wooden poles decorated with messages of peace from 30 entrants.

The poles will remain on display until October 31. Organizers will auction them off in November to raise money for Project 10 20, Johnson County’s cold weather homeless shelter.

Although some professional artists have contributed to the project, they’re not the only ones whose work you’ll see. The list of participants includes everyone from city employees to local Girl Scouts. 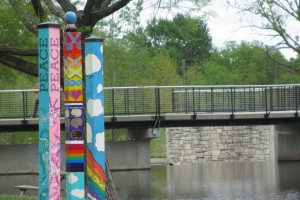 Thirty-seven peace poles are now on display in groups of three all over Sar-Ko-Par Trails Park. // Photo by Beth Lipoff

Lenexa’s Rotary Club and its fellow chapter in western Johnson County brought the idea to the city. Initially, it was on a smaller scale, but as city employees brainstormed with Rotary Club representatives, it took on a new dimension.

Previously, Lenexa had done something similar with a decorated rain barrel project.

Getting community members involved “just felt like such a fun way to engage a lot of people in this case,” says Susanne Neely, recreation supervisor with Lenexa’s Parks and Recreation Department. “Going into this, I had no idea what to expect. The variety in artistic expression, the way people chose to express peace—it’s just beautiful.

Some of the poles have messages of peace written in different languages. Others use no words at all. The most common decorating medium was paint, but a few people got even more creative.

One pole features a sunflower topper with a suet center to serve as an avian snack bar. Another is covered in wool, yarnbombing style. A consideration artists had to make is that the poles will be outside for six months, and the materials have to hold up for that amount of time.

Much of Lory Rodak’s pole is painted designs of a beehive, but she’s made a few additions in the form of 3D bees attached to the structure. She painted wooden beads for the bodies and screwed wingnuts coated with iridescent paint into the pole to serve as wings.

“To me, art should be all of the styles—whatever helps you express yourself in any given situation,” Rodak says.

She also made a special queen bee topper for her pole out of a solar light, crackle glass, plastic mesh, and a few other things. Unfortunately, shortly after the poles went up, someone stole the topper. 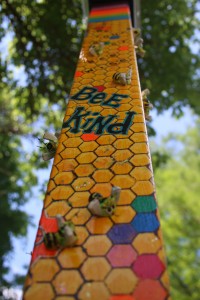 Rodak, who lives in Lake Tapawingo and works for the city of Lenexa, also helped her seven-year-old niece make her own pole for the project featuring drawings of puppies.

Laurie Hess, a retired software consultant, wasn’t satisfied with just creating one pole. Of the seven designs she submitted, the city accepted six. That meant some intense decorating time this spring.

“I became obsessed with it, thinking of all these different ideas, trying to cover all the angles of ways to promote peace,” Hess says. “My husband thought I was nuts. He would wake up in the middle of the night, 2:30 or 3 in the morning, and I was downstairs painting.”

Having the creative outlet meant a lot to her after this difficult year.

“I think some of it was just because of the long quarantine and being home so much and having extra time. It just seemed like if I could make something that could make other people feel peaceful like I wanted to feel, that inner peace—it was really motivating,” Hess says.

Although paint is part of all her poles, she decorated one with bottle caps to promote peace through recycling.

While Hess was one person creating six poles, another entry had a different challenge. The pole from Girl Scout Troop 708 from Mill Creek Elementary was one piece created by eight people.

To make it work with social distancing, the girls teamed up in groups of two, with each group taking one side of the pole.

“It’s very colorful and bright and happy. That’s what they wanted to portray. Peace can mean a lot of different things to a lot of them. They wanted it to be a positive message for anybody looking at it,” says Erika Ward, troop leader.

A panel of judges reviewed the entire exhibit in May and awarded the best of show prize to Andy Handwork for his design featuring signs reading “Peace on Earth” in different languages. Hess and Rodak received honorable mentions. 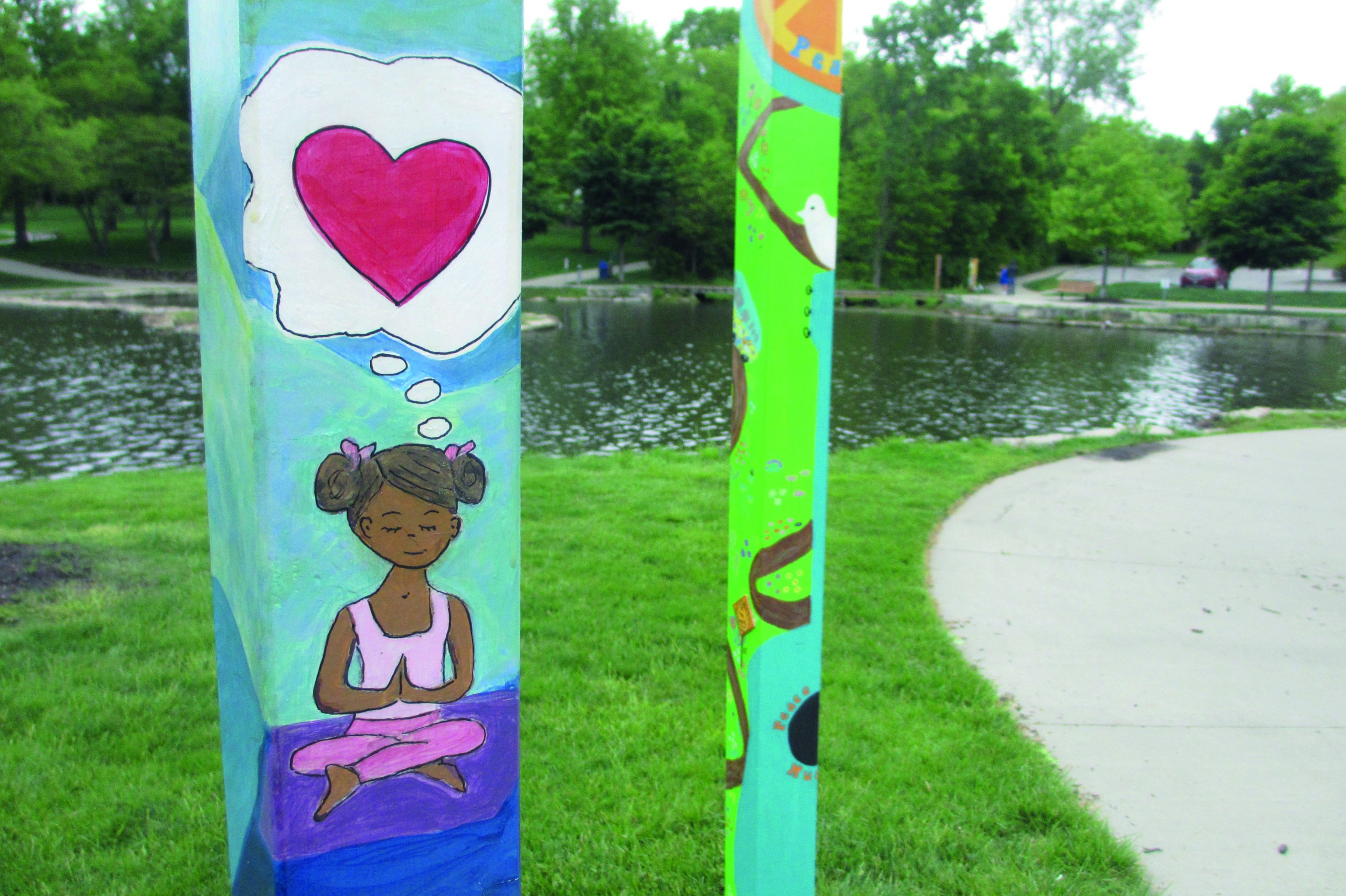