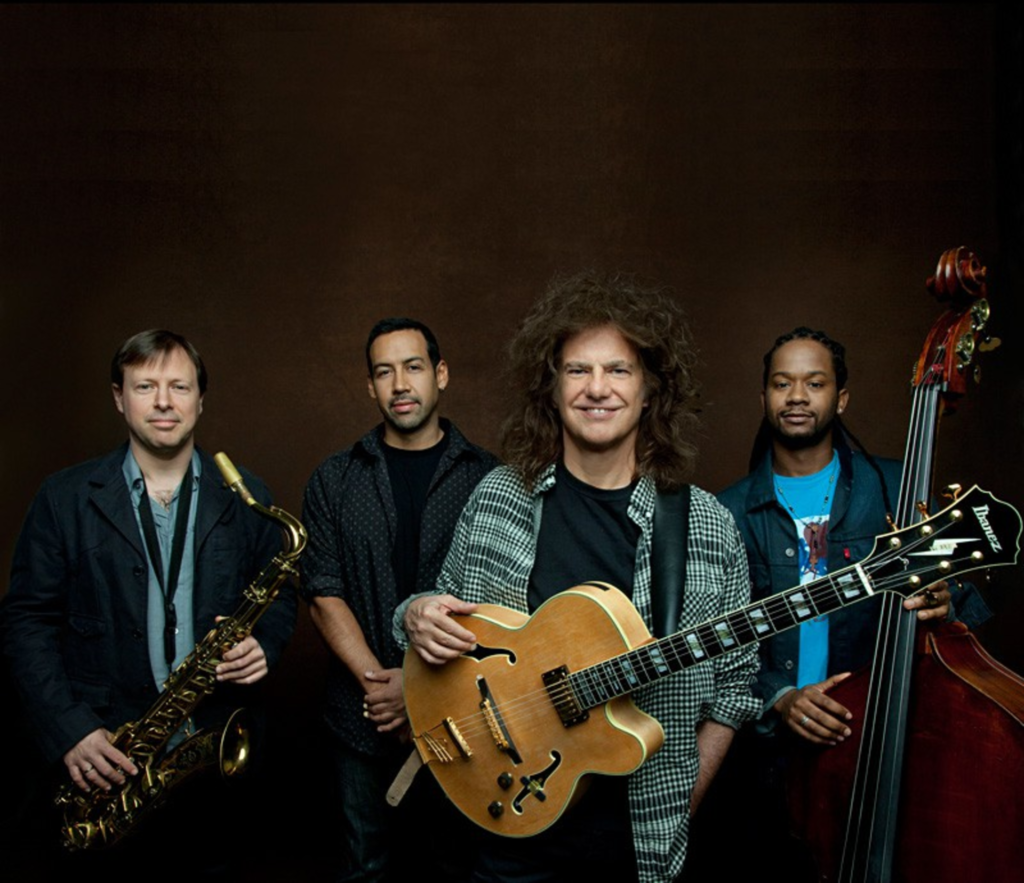 Guitarist and Lee’s Summit native Pat Metheny returns on Thursday to make his hometown debut with his new group, the Unity Band. (It derives its name from the Metheny clan’s longstanding affiliations with this area’s very own Unity Church.) Rounded out by saxophonist Chris Potter, bassist Ben Williams and longtime Metheny drummer Antonio Sanchez, the Unity Band arrives on the heels of its eponymous new album on Nonesuch.

Live, the Unity Band’s songs take on a dramatically kinetic quality, thanks in particular to Sanchez’s assertive style. Also lending to the specialness of the occasion: This is the first group that Metheny has led in more than 30 years which features a tenor player. In a sense, Unity Band reopens channels that Metheny first explored on 80/81, his 1980 album with bassist Charlie Haden, drummer Jack DeJohnette, and saxophonists Michael Brecker and Dewey Redman. Metheny checked in with The Pitch last week to discuss what else is new.

The Pitch: At your Lee’s Summit High School Hall of Fame induction speech in 1998, you talked about the impact that locals like your old music teacher Keith House and the Browning family had on you.

Metheny: Giving that speech at the Lee’s Summit High School Hall of Fame induction ceremony was the most terrifying 20 minutes of my entire life, including playing for a billion people at Live Aid and everything else. It was quite a thing. Because so many people that I knew were there, and especially considering that my graduating from high school … the most kind way to say it would be to say that it was a mercy graduation. I never had any grade above D — or what they used to call “I” out there, which was “Inferior” — from sixth grade on. I don’t think I officially had enough credits to graduate, but they were kind enough to actually let me leave with a diploma. To go from that to actually being in the hall of fame was pretty cool.

It’s not as if you haven’t played with your share of saxophonists, but it has been a long time since you’ve featured a horn player in a band that you’ve led. What had you been trying to explore away from the tenor saxophone all these years with your own groups?

For me, a big element of what it means to be a musician is the whole aspect of discovery. All of my favorite musicians were really committed to trying to find alternate ways of exploring the forms they were interested in. That’s been a big priority for me. Even the whole idea of just a guitar-bass-drums trio was relatively unexplored in jazz at the time that I started. There were a couple of records, but not much. With my group [the Pat Metheny Group], fistfights still break out over [the question] “What is that?” There’s all these wacky words that come up, like fusion. Even the word jazz doesn’t really fit well for a lot of the things about music that I’m interested in. Trying to find a voice or a point of view — not just as a player but also as a bandleader and a composer — has naturally led me to put together ensembles that were not quite conventional in the same way that a horn plus a rhythm section is conventional.

People actually get into fistfights over what labels apply to your records?

[Laughs.] Even after all this time, there’s no real consensus. I actually consider that to be a really good thing. There are many musicians where it’s like, “Oh, yeah, it’s that record [that defines them].” With me, it’s kind of equally distributed among all of the records. There’s different people that like this and different people that like that. If there is any frustration in that, it’s that all of those fistfights or discussions miss the point, which is that all of my releases go together. That’s a much more complex idea. I hear very reduced explanations like, “Well, there’s the [Pat Metheny] Group and that’s the commercial vehicle.” Many times, not only is that not the way it is but it’s backward. I mean, the Group is probably the least easy thing for me from a financial standpoint because it’s so big, as opposed to a trio, which is a lot more mobile. But the message is, in fact, the way it all goes together as one way of thinking about what music can be, rather than a bunch of little distinct side roads. It’s one big road.

Take your noise-oriented album Zero Tolerance for Silence, for example. In the AllMusic review for that album, it suggests that the music on there might have been your way of “saying ‘screw you’ to the label.”

Not at all. In fact, it’s the opposite. At that time, [Sonic Youth’s] Thurston Moore was involved in the A&R decision making at Geffen. He heard it and just freaked out and wanted to put it out immediately. It actually didn’t quite fit in with the touring that I was doing at that time, which sorta got bulldozed over by the record. They were like, “We’re putting this out!” [Laughs.]

It sounds like Geffen was actually enthusiastic about that release.

Oh, completely. I don’t even see what the big controversy is with that record.

On some level, it must be a blessing and a curse that some of your work is polarizing. It’s got to be satisfying and frustrating at the same time that people cling to their own notions of what you mean to them.

Well, on the blessing-curse ratio, it’s like 99 percent blessing and 1 percent curse.

You often speak very highly of Ornette Coleman and vibraphonist Gary Burton as being two of the most singular voices you’ve ever come across. What is it that puts Unity Band saxophonist Chris Potter in that same category?

The specific, pragmatic piece of evidence that I would offer to support that is this: When you do a record with somebody, in almost every case you do a bunch of takes. At the end of the session, you’ve got this whole bunch of stuff, and then you have to go through it and pick which version you’re going to use. The three musicians where I can say you could pick any one of them and it would be equally great were Gary, Ornette and Chris. It’s the only time I’ve ever experienced that, where every single version was different and great. That’s also been borne out live. I’ve played with Gary the most, but I probably did a hundred gigs with Ornette, and I’m getting pretty close to a hundred now with Chris, so it’s a pretty good sample size. They’re just amazingly consistent improvisers. Of course, they’re coming from very different places in terms of dialect, but in terms of being able to get to stuff every time, they’re really in a special category.

Can you talk more about the ideas behind the Unity Band?

I can actually talk about this in terms of Kansas City because it’s the only place on the planet where the actual meaning of the album title might resonate with a few people. The reason it’s called Unity Band is because of [Unity Church world headquarters] Unity Village. The whole Unity Village thing, with my family, my grandfather on my dad’s side, my brother playing in the Unity Band from the time he was really young, and my experiences going there in the summer — first as an observer and then as a participant in the Unity Band — were really great memories for me. Unity Village in particular is very special to me. Going back to the time I was an infant, I spent enormous amounts of time out there in the summers. Knowing that this was going to be a band put together mostly for summer events had this resonant thing for me. I was actually going to have an album cover with all this Unity Band stuff from the old days. I got all these pictures from Unity, and finally [Nonesuch Rec­ords president] Bob Hurwitz said, “You know what? Nobody has any idea what you’re talking about. Would you just stop it with this?” [Laughs.] He said, “Unity Band is a great name for a band. You can think about it how you want, but it’s really just [a great name for] what this music is.” So we ended up not going in that direction. But, in fact, we’re both right because, of course, my memories were included, but also because that word is a great word for so many things that I’m interested in … it’s my natural sensibility to gather things together —

To mix and match?

It’s more than mix and match. It’s actual integration. It’s not arbitrary, like a casual “Oh, maybe I’ll throw a little of this with a little of that.” Right from the beginning, the first eight notes of [debut album] Bright Size Life are saying, “OK, you know what? This is landing on a major triad, not a dominant seventh chord.” Why can’t folk-type harmonies exist with this level of improvising? Right from the beginning, I’ve been trying to figure out a way of really going deep into the idea of inclusion. It’s not as casual as mix and match. That’s what I would not want it to be. What I’m looking for is a way for things to really coexist. That’s what the big long record [of my work] has been about — not just this one but all of them together.

So you’ve come to look at your whole body of work as one album and all your shows as one concert.

Yeah, and as a tour goes on, I start to think of each gig as one song and each tour as one album. It all starts to merge in terms of time, too. That’s an overarching theme for me in a lot of ways.