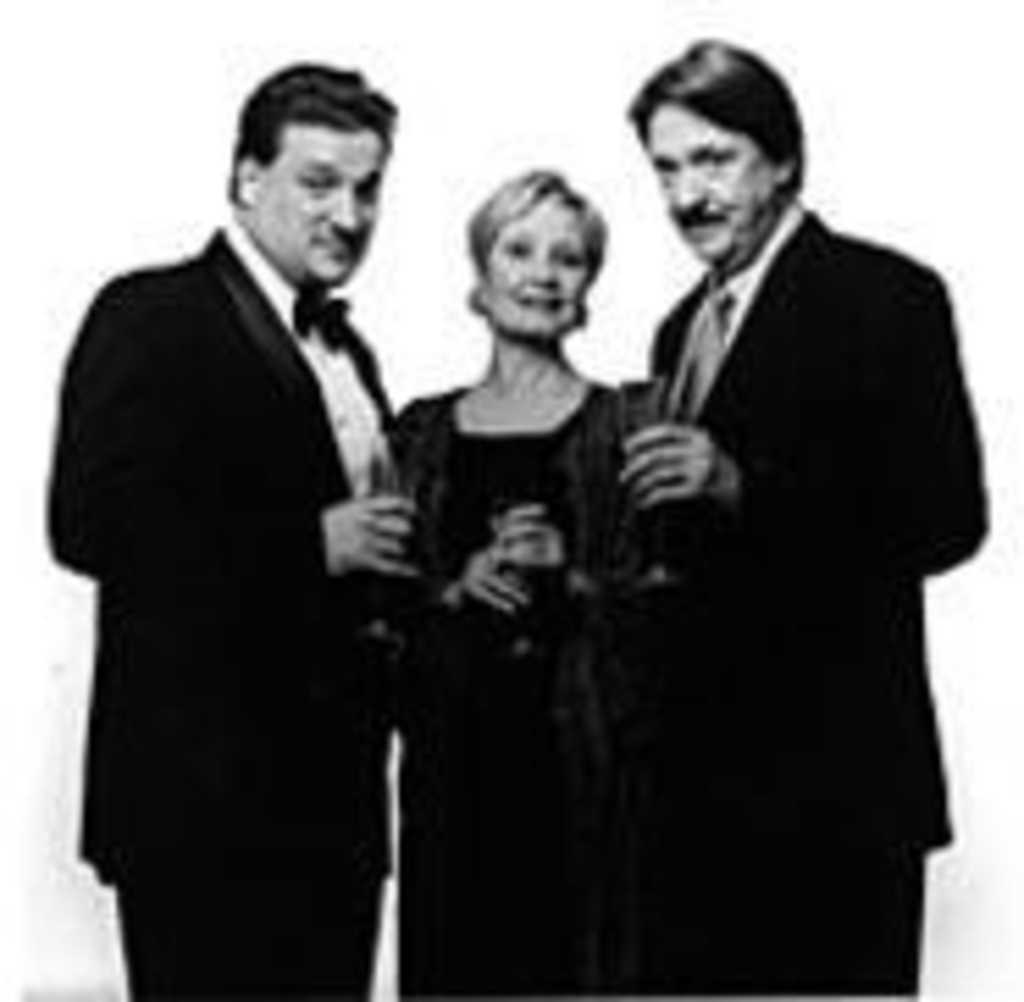 The darker side of Parisian wedded bliss gets the Merchant-Ivory treatment later this year in the film Le Divorce. Beating them to the punch is Neil Simon, of all people, whose work is surely being produced every night on any number of American stages. The Dinner Party, at American Heartland Theatre, is not traditional Simon, though. Humorous without being laugh-out-loud funny, it’s filled with disagreeable people.

Donna Thomason makes her directing debut with this show, and it fits her like haute couture. Set in the private dining room of an upscale Paris restaurant, this roundelay begins with three well-dressed men meeting for the first time. Claude (Robert Gibby Brand) is a fussy antique-book dealer who is early to every appointment. Joining him promptly at the requested hour is Albert (Craig Benton), a crass but lovable rental-car scion who dabbles in art — abstract paintings of rental cars. Third to arrive is the successful but philandering Andre (Gary Holcombe). Soon, these strangers will have a unified grudge.

The gentlemen surmise from the mysterious setup that the only thing they have in common is their divorce lawyer. The table is set for six, so it’s no surprise when the guys’ ex-wives traipse into the room. Mariette (Cheryl Weaver) was married to Claude, who resented her success with runaway best-selling novels. Albert’s ex-wife two times over, Yvonne (Melissa Flaim), doesn’t immediately discount the idea of breaking bread with Albert, even though he refuses to speak to her. The third divorcée, Gabrielle (Peggy Friesen), wafts into the room. The kind of woman who knows how to make an entrance, she’s a game player with a devilish plot that only in its closing refrain reveals a palpable loneliness.

The term friendly divorce is not in these folks’ vocabularies. They call each other “monsters” and “termites” or, equally to the point, “dreary.” They bemoan what they mostly didn’t get from each other, but it’s like random Uzi fire. Gabrielle, however, has specific targets in mind and invites them to play a wicked party game: What was the worst thing your ex ever did to you? And, to temper the acidity, what was the best? The only rule is that no one is exempt. It would be unfair to reveal who finally sits down for the titular meal, but the seating arrangement would mortify a proper hostess. “That’s what the party’s about — to find out what the party’s about,” Gabrielle says.

The cast has a delicious time biting down on these characters. Of the six, Weaver is particularly edgy and neurotic. (And she’s claustrophobic, a familiar Simon trait.) Benton is noticeably endearing; his puppy-dog clumsiness had the female audience in his back pocket. Flaim’s character is the most underwritten, and she opts to play Yvonne as a twit. Her unattractive costume doesn’t help, but that’s designer Paul Hough’s only stumble among otherwise perfect wardrobe choices — Friesen wields her blood-red, head-to-toe shawl like the wings of a raptor.

Because Del Unruh’s handsome set design calls for one room, where the play takes place in real time, there isn’t a lot for sound designer Roger Stoddard or lighting designer Shane Rowse to offer. But Thomason’s direction makes the most of the confines. Actors are perfectly placed in several scenes. When they’re at each other’s throats, they’re comfortably distant; when they’re in conspiratorial mode, they’re almost touching. And the dinner table nearly becomes another character. It sits there in a tastefully imposing manner, both inviting and mocking the surrounding sextet.
Postscript: The Unicorn Theatre’s Bat Boy has flown the roost — leaving in its wake the biggest sales receipts of any Unicorn show in its 29-year history. Demonstrating her knack for the commercial, Artistic Director Cynthia Levin will bring back the show this June, which means repositioning Kenneth Lonergan’s Lobby Hero for the 2003-04 season.

“Overall, the show averaged 92 percent capacity,” Levin says (citing a figure that can be topped only by the 94 percent capacity The Laramie Project enjoyed during the 2001-02 season). “But the third week was 100 percent, the fourth was 108 percent, and the fifth [and last] was 110 percent.” By comparison, December 2001’s Fuddy Meers — the funniest show on any local stage that year — averaged just 53 percent capacity.

Seth Golay will apparently return to play the title character, but three of Bat Boy‘s original cast members have other commitments — including Lori Blalock, whose performance as the Bat Boy’s adoptive mother was reminiscent of June Cleaver on magic mushrooms. Stepping into her shoes will be belter Karen Errington; Levin will hold auditions to fill the other roles.

The Unicorn wasn’t the only theater to see a frenetic box office in December. Late Night Theatre’s A Scarrie Carrie Christmas Carol was sold out for much of its run. Though he’s tempted to revive Carrie, Late Night Artistic Director Ron Megee says the company will proceed with its season as scheduled, heading for Dangerous Dirty Little Liaisons and the multigender amalgam of Josie and the Pussycats and Johnny Quest.