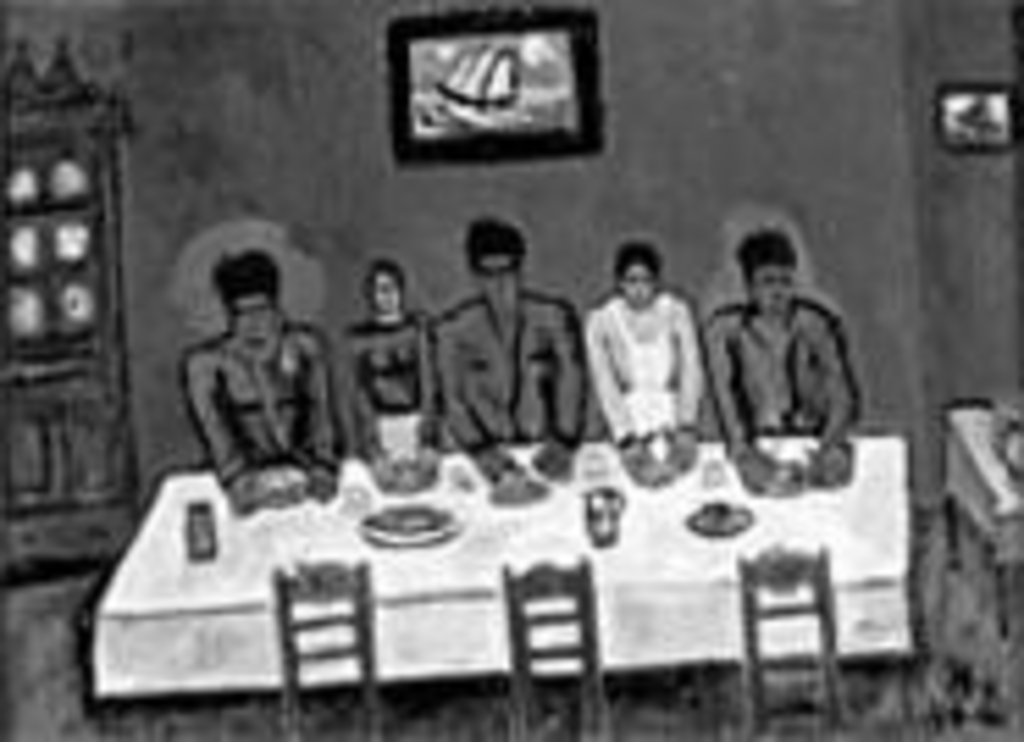 It was supposed to be a party, but the high ceilings and pillars at the Nelson-Atkins Museum of Art seemed more oppressive than elegant. A live band butchered covers of Santana and Van Morrison songs; during a particularly painful rendition of “Play That Funky Music,” a lone couple boogied down on the marble floors of the Nelson’s main hall.

The alleged festivities were hosted by the Young Friends of Art, which throws a huge celebration called Party ‘Arty each fall to benefit the Nelson’s education and community-outreach programs. The Young Friends bill themselves as hip and in-the-know.

But this year, for the first time, the party’s theme was actually based on fine art. Marsden Hartley (1877-1943): American Painter opened at the Nelson on October 11; later that evening, the Young Friends of Art converged on the Nelson for Party ‘Arty Hartley.

An association of roughly 2,000 museum members between the ages of 21 and 38, the Young Friends host a variety of events throughout the year, including a field trip to a Harley-Davidson factory, architectural tours of downtown Kansas City, and workshops explaining the ins and outs of collecting visual art. (What do you do when the piece you bought ten years ago doesn’t match your new couch? Put it up for auction, of course.) But this crowd looked like it had passed the cutoff mark for Young Friends at least a decade ago.

A volunteer bartender with a youthful grin full of braces theorized that the museum’s stifling atmosphere, along with the bad music and the lack of drink choices (he was serving only two kinds of wine and beer) explained the party’s middle-aged attendance. Or it might have been the weather. Earlier that day, organizers made a rain call to cancel the interactive-art activities planned for outdoors. (Last year’s Party ‘Arty Orbit, held outside the Kansas City Artist’s Coalition, featured an opportunity for Young Friends to paint their dates — participants wearing Tyvek suits spun around while their friends used them as canvases.)

In fact, this was also the first year that the event took place at the museum. Past venues include the River Market, the West Bottoms and the downtown airport; by throwing the party at the Nelson, the Young Friends hoped to lure members back to the stately institution — which is the reason the organization exists in the first place. (The Young Friends of Art was created in 1960 as an offshoot of the Friends of Art, which raised money so that the museum could get around a stipulation in William Rockhill Nelson’s will that prevented the purchase of any art until its creator had been dead for thirty years.)

As it turns out, Marsden Hartley (1877-1943): American Painter‘s abstract, still life, landscape and figurative works radiate the intensity that the party in his honor lacked.

Hartley’s vibrant palette and emotionally charged paintings reflect the turbulence in his personal life and the historical events surrounding him. For example, “Fisherman’s Last Supper,” from 1940-41, depicts a mother, father, daughter and two sons — the Masons, with whom Hartley lived in Nova Scotia. Tragedy struck the family of fishermen when the sons, Donny and Alty (with whom Hartley is thought to have been in love), drowned at sea. The artist tips the family portrait’s composition dramatically to the left, as if the scene were taking place on a ship on a stormy ocean. On the deep-blue dining room walls hang two framed pictures of clipper ships; in front of that, seated along one side of the long dinner table, family members glance despondently down toward their heavy, pawlike hands resting around their plates. Hartley’s thick, confident lines and blocky shapes are deft yet heavy and dramatically morose.

Hartley was born in Maine in 1877. He studied painting in Cleveland and New York City before meeting photographer and gallery owner Alfred Stieglitz in 1909. At Stieglitz’s urging (he also supported the careers of painters Georgia O’Keeffe, Arthur Dove and John Marin), Hartley moved to Europe in 1912, living first in Paris, then in Berlin. The artist reluctantly returned to New York in the midst of World War I, then moved to New Mexico in 1918. Over the next twenty years, Hartley lived and painted in Mexico, Europe, Bermuda and Nova Scotia before settling down in his home state in 1937.

“Hartley was a chameleon as a painter,” says Randall Griffey, assistant curator of American art at the Nelson. Hartley adopted several styles, themes and subject matters, but his work also changed to reflect the personal and cultural events engulfing his life.

Living in Berlin before the outbreak of World War I, Hartley became enthralled by the military pageantry, and his abstract paintings incorporate an array of brightly colored geometric shapes influenced by German army insignia. “Portrait of a German Officer” consists of a harmonious and complex grouping of flags, banners and a helmet (among other items) on a black background. This visually kinetic composition is a memorial to a German soldier named Karl von Freyburg, Hartley’s close friend and possible lover, who was killed shortly after the start of the war. Von Freyburg’s initials appear in gold at the lower left of the painting; an E, which may stand for Hartley’s real first name (Edmund), appears in red script on a block of yellow beneath an iron cross.

Unfortunately, Hartley’s Berlin paintings were displayed for the first time in the United States in 1916, when anti-German sentiment here was widespread. “Hartley, at certain points in his career, suffered from bad timing in terms of showing his work,” Griffey explains. Similarly, the first major retrospective of his work was shown by New York’s Museum of Modern Art in 1944, a year after Hartley’s death — and during the second World War, which led the museum to de-emphasize his German period.

During his lifetime, most Americans did not share Hartley’s admiration for European modernism. Instead, regionalist works by artists such as Thomas Hart Benton and John Steuart Curry were popular. Toward the end of his life, Hartley put his own twist on that style, returning to his native Maine and creating rudimentary New England land- and seascapes. In “Mt. Katahdin — November Afternoon” (a piece on loan to the traveling exhibition from the Nelson’s permanent collection), a flatly painted gray mountain looms above a forest of brown trees. Heavy-looking clouds hang in the sky above the mountain. “Hartley’s awkward and crude style of painting was deliberate,” Griffey says. He adds that Hartley was purposely emulating the work of folk artists.

This exhibition is the final stop of the only Hartley retrospective in more than twenty years. (It was organized by the Wadsworth Atheneum Museum of Art in Hartford, Connecticut; the last show to span Hartley’s career was mounted by New York’s Whitney Museum of American Art in 1980.) Hartley lacks the name recognition of a Degas or Monet, who helped draw crowds for the Nelson’s summer blockbuster, A Magnificent Age, which is one reason Party ‘Arty was an attempt to introduce a wider audience to his art. But Hartley fans — who really are hip and in-the-know — will travel from far away to view the collected works of one of America’s finest painters.