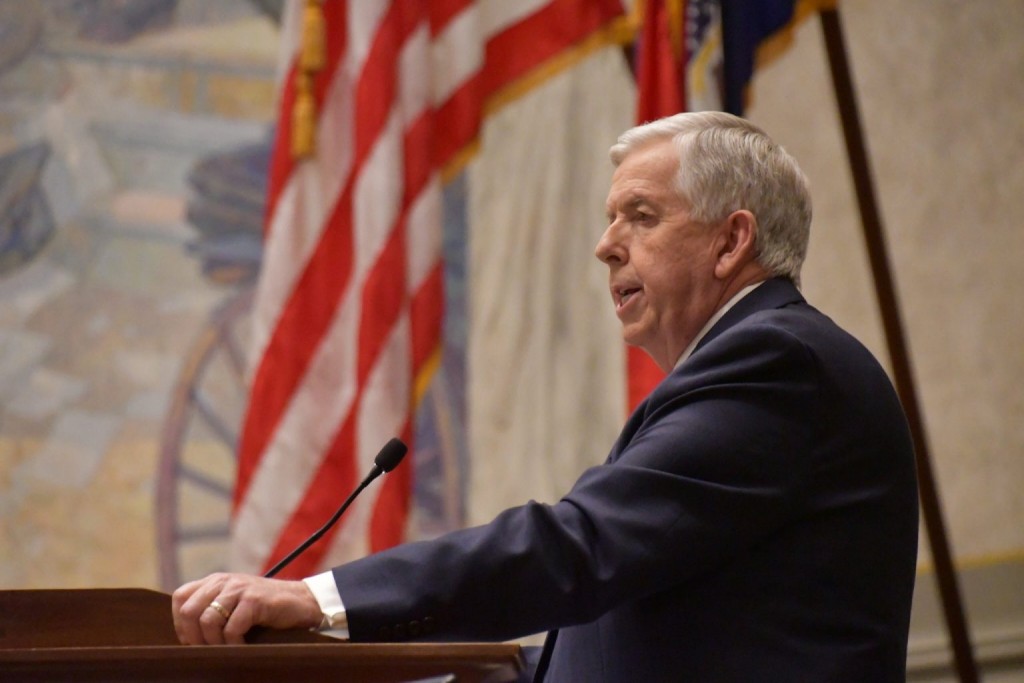 Despite a COVID-19 outbreak scuttling his plans to address a joint session of the Missouri General Assembly, Gov. Mike Parson laid out his policy priorities and defended his administration’s response to the ongoing pandemic during his annual State of the State address on Wednesday.

Instead of delivering his speech in the House, Parson was forced to break from tradition and speak to a sparse gathering in the Missouri Senate.

Unsurprisingly, the pandemic that’s infected more than 450,000 Missourians and resulted in 6,700 deaths around the state took center stage.

“This past year has brought many challenges,” Parson said, “with a worldwide pandemic that has stressed our healthcare system like never before, caused many deaths and much sickness, left thousands of Missourians out of work, devastated small business and many more impacts we will likely be dealing with for years to come.”

The governor ticked through a litany of actions his administration took in response to the virus’ spread, from waiving nearly 600 statutes and regulations to helping secure over $11 billion in low-interest loans for Missouri small businesses to ramping up testing to more than 100,000 a week.

“The bottom line is that we have been working day in and day out to fight COVID-19 while also dealing with civil unrest, violent crime and a difficult budget,” Parson said.

The last-minute change of venue stemmed from a recent spike in positive cases among lawmakers and staff that caused the House to cancel session last week.

At least two Senators — Republican Bill Eigel and Democrat John Rizzo—are in quarantine after Republican Sen. Andrew Koenig and a staffer for the conservative caucus tested positive in recent days.

The governor has vehemently defended his administration’s record on COVID-19, and most recently he’s publicly bristled at recent reports citing Centers for Disease Control data showing Missouri ranks last in the nation in terms of the percentage of its residents who have received the initial shot of a COVID vaccine.

On Tuesday night, the state launched a dashboard that for the first time detailed demographic data and a county-by-county breakdown of where COVID vaccines have been given to residents.

According to Missouri’s dashboard, an estimated 4.7 percent of the state’s residents have received at least their first dose. In the hopes of increasing the number of Missourians who receive the vaccine, the governor’s office told the St. Louis Post-Dispatch it was hoping to divert 25,000 doses away from CVS and Walgreens for distribution at mass vaccination sites run by the Missouri National Guard.

Parson noted in his speech that Missouri was “one of the first states in the nation to submit our COVID-19 vaccine plan, and have now administered nearly 400,000 doses to Missourians.”

Democrats were less than impressed with the governor’s record, especially in light of the coronavirus cases within the legislature.

“Republican leaders, from Donald Trump to Mike Parson, have mishandled this pandemic from the beginning,” said Rizzo, the Senate Democratic leader. “The governor is continuing to fail with his last-in-the-nation vaccine distribution. Now, his gross mismanagement of this crisis has resulted in the House not allowing him to give his speech in their chamber.”

Rizzo said the governor should have delivered his speech remotely.

“The governor’s desire to give a big speech in-person is about vanity and optics,” he said. “He could easily give this address online from his office without putting anyone else’s health at risk.”

While his administration’s response to COVID-19 was a key piece of his speech, Parson also laid out his priorities moving forward.

“It is important that we continue to follow through on key investments in workforce development and infrastructure,” Parson said. “We must also continue finding ways to strengthen public safety, improve health care, and make state government more accountable.”

Among his top priorities is early childhood education, and he announced the consolidation of several different programs and divisions across three state agencies into a new Office of Childhood.

“I have said many times that our children are the workforce of tomorrow, and if we are to truly make a difference in their lives, it starts with early childhood development,” he said.

He also proposed other investments in K-12 education, including a fully funded foundation formula and the expansion of the WorkKeys curriculum to all 57 existing career centers in Missouri. He called for an increase of more than $13 million for the A+ scholarship program as well as the continued funding for the Fast Track Workforce Incentive Grant program.

Parson also returned to a familiar theme of his time as governor—investment in the state’s infrastructure.

In addition to additional funding for roads and bridges, he wants lawmakers to approve $5 million to expand and improve broadband services across the state and $100 million to clear the backlog of maintenance projects from every part of the state.

The governor also threw his full-throated support behind legislation that would shield businesses from certain lawsuits stemming from the pandemic, saying “I hope the first piece of legislation to hit my desk this year is a clean COVID-19 liability protection bill.”

“Missouri businesses, manufacturers, health care providers, schools, churches, and many other entities across the state did not hesitate to step up and help their communities in the fight against COVID-19,” he said. “None of these groups should be penalized for their efforts to help.”

He implored lawmakers to approve legislation allowing state and local governments to collect taxes on online sales, decrying the “unfair advantage online retailers have over small businesses in Missouri.

“I am a strong supporter of lower taxes – in fact, I have signed several tax cuts into law,” he said. “However, our small businesses, especially in smaller communities, are getting crushed right now because they cannot compete with huge online retailers. We must level that playing field and consider ways to responsibly invest those revenues and provide new opportunities for our state.”

Parson sad that he sometimes jokes about his gray hair, but to be very honest, this gray hair was earned through thick and thin, ups and downs, successes and failures.