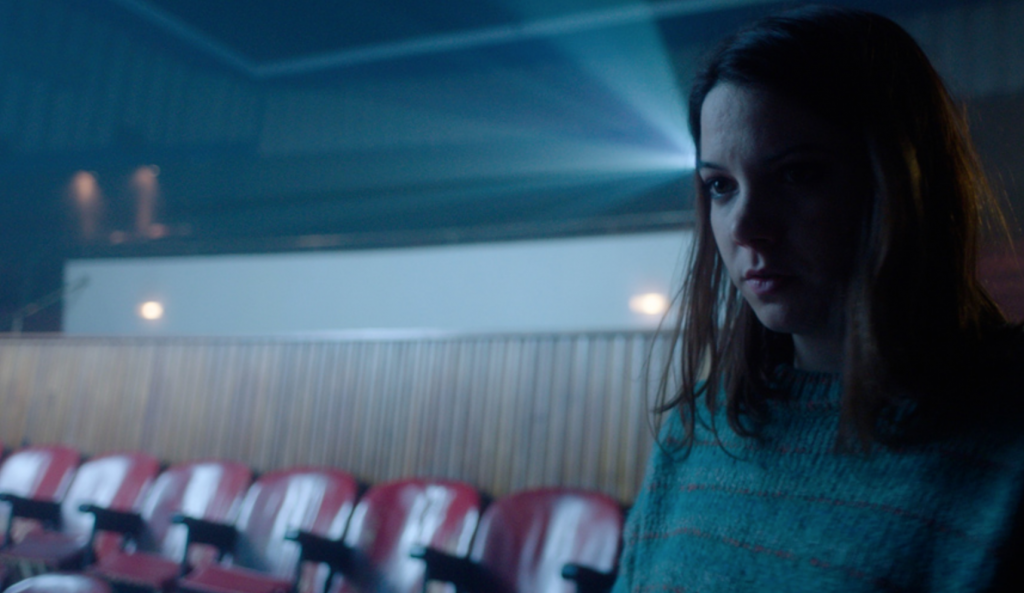 Without fail, several times a year a crop of indie movies arrive on the scene to claim the moniker “ultimate throwback film”. Armed with a fondness for the films of yesteryear, they hope to rekindle that glory. More often than not, they miss the mark. By investing too much in the belief that referencing films from that time or populating it with actors from that time should do the trick. Then along comes something like The Last Matinee. Whereas others may only dip a toe in the nostalgia pool, this one wades straight into the deep end. In the process, it also proves to be an effective little slasher.

Not content with merely tackling the throwback subgenre, director Maximiliano Contenti, and screenwriter Manuel Facal double down by taking on the obscure “set within a theater” world as well. When going up against vaunted titles such as Demons, Popcorn, and Anguish, you better bring the goods. The duo does one better by relatively playing the whole thing straight. Doing so allows The Last Matinee to be judged on its own terms.

On a rainy day in Montevideo, Uruguay in 1993, it’s business as usual for the Cine Opera movie theater. The children’s show is letting out and it’s time for the horror matinee. Only there are two small hiccups. First, the long-standing projectionist’s daughter, Anna (Luciana Grasso) has sent him home, citing health concerns. Secondly, a raincoat and leather glove-wearing killer (Ricardo Islas) is stalking the grounds. Gruesomely dispatching anyone and everyone he comes across. In a manner that happens to be as horrific, as the afternoon film unfolding on the screen.

To make matters worse, the lock to the metal shutter out front has been broken, effectively cutting off contact with the outside world. Inside the theater, the patrons have their own problems to deal with. The usher, Mauricio (Pedro Duarte) takes his job a bit too seriously. A trio of inebriated unruly teens has taken root in the upper balcony. Tomás (Franco Duran), a preteen who hid after the last film, to see the scary movie. Not to mention two people on one of the most awkward and stilted first dates imaginable.

Any film wanting to make its stamp in the Slasher or Giallo realm has to hold its own when it comes to kills. Characters are dispatched in various grisly manners. Including an extended eye trauma sequence that would make Lucio Fulci stand up and cheer. Not only does the viscera flow freely here, but each slaying carries a bit of weight with it. This is one killer who fully leans into his work. To the point where at one point, the screen literally runs red with blood.

Concenti is clearly is an ardent student of horror films. Every frame of his movie screams that. While it’s easy for any director to be a fan or appreciator of a specific genre, he seems to understand the works he’s emulating on a molecular level. Though it clearly shows reverence for the likes of Sergio Martino, Lamberto Bava, Dario Argento, and Fulci, it owes more to their proteges. Hold The Last Matinee up to the likes of Michele Soavi’s The Sect (1991) or Sergio Stivaletti’s Wax Mask (1997) and you’d be hard-pressed to spot much of a difference. Moving from simply aping an aesthetic to an astounding degree and feeling more like some artifact that was previously lost to time.

For all the talk about how the film captures a certain time and place, it’s just as accessible to newbies, as it is to staunch horror fans. It doesn’t hit audiences over the head with a litany of obvious pop culture references (poster easter eggs is the farthest it goes), but immerses itself in style, proving itself to be an extremely solid slasher. Trimming the fat and stripping itself of modern contrivances, to more closely embrace the Giallos and exploitation features it holds dear.

The Last Matinee is a loving reminder of why going to the movies is so much fun. Weaving thrills and kills through a technically beautiful production with great confidence—it all makes for an exasperating thrill ride.