It didn’t take long for the Uptown Theater to get worked into a frenzy at last night’s Panic at the Disco show. The capacity crowd roared at a stage crew member testing the fog machine before the band hit the stage, and turned it up about a hundred decibels when lead singer Brendon Urie strolled out in his leather pants and jacket.

The group didn’t waste time, going right into the anthem of its hometown, “Vegas Lights,” and the full Panic experience started racing. Video boards behind the band flashed clips that corresponded to the music, counting along with Urie’s “5-4-3-2-1” while a Vegas-worthy light show lit up the venue. 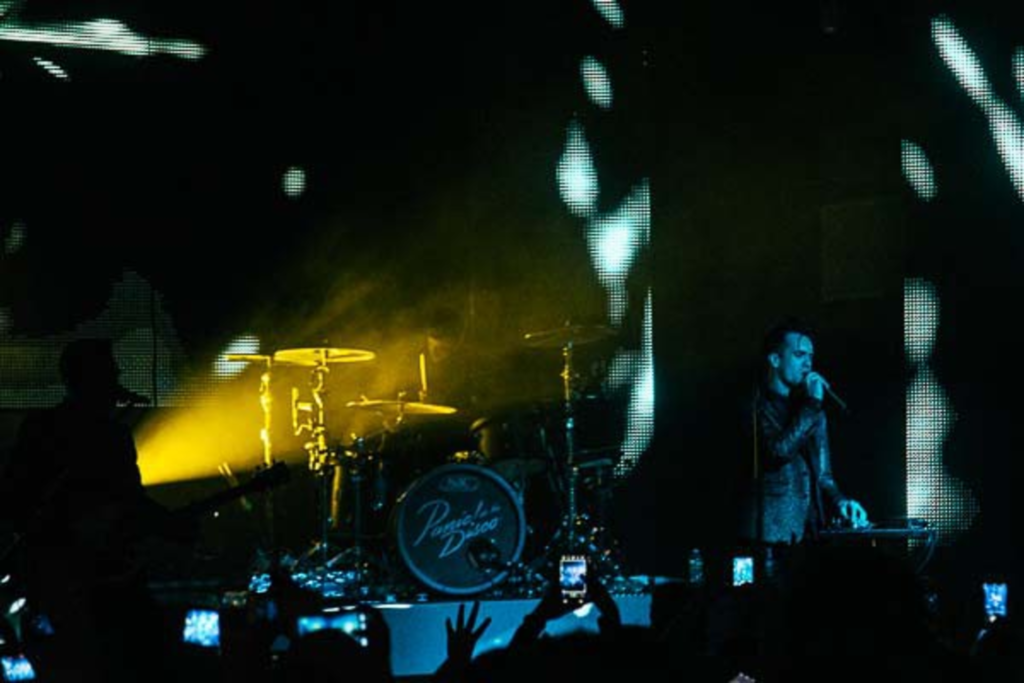 Even though the song was from the group’s latest album, the October-released Too Weird to Live, Too Rare to Die, the audience yelled along with every word like it was an old favorite. Panic followed with “Time to Dance,” a track from the first album nearly a decade ago, and continued to mix the old and new throughout the night.

It wasn’t until a few songs into the set that Urie addressed the crowd. “We’re Panic at the Disco, and you’re fucking great!”

After years of touring, Urie is an expert showman. He’s got the moves, the falsetto that would make Rob Halford jealous, and endless appreciation for the audience – and he didn’t seem to be pandering. The exuberant crowd hung on his every word, hitting all of the call-and-responses over the course of the show, and generally geeked out at the experience.

Prerecorded clips between songs kept the energy from any lulls, but it reached a peak during “Miss Jackson.” Near the end of the song, the band froze for a second, building tension, then Urie absolutely nailed a back flip from the drum risers. The crowd went wild. 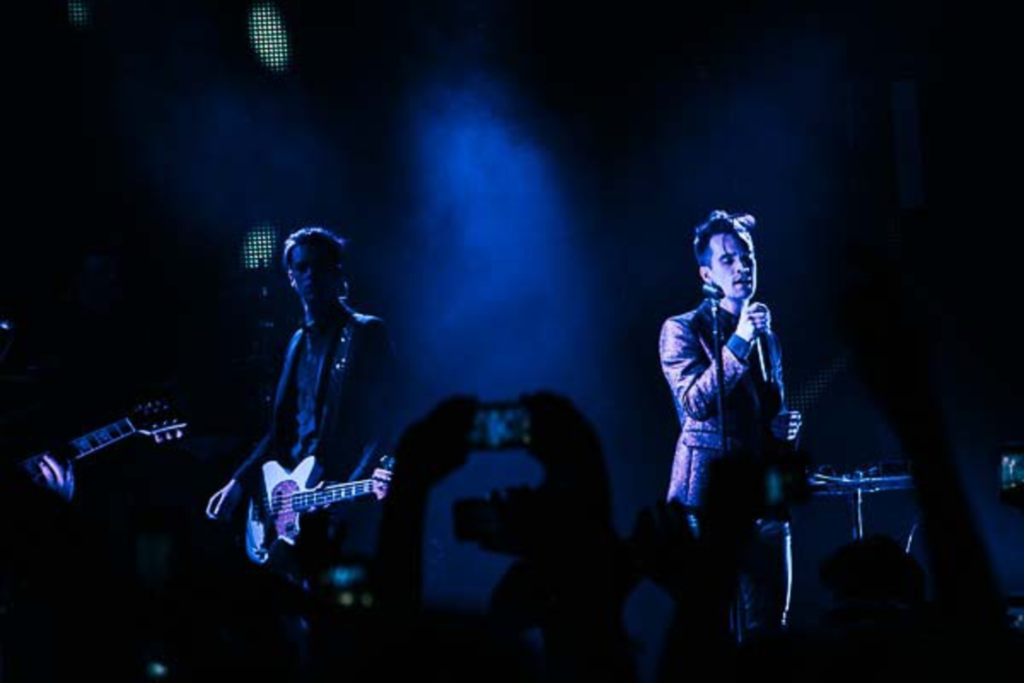 The set lasted a little more than an hour, which felt both short and exhausting at the same time. Any longer and people might have started dropping from heat and excitement, but no one wanted the party to stop.

It was an early arriving crowd that skewed toward youth. They packed the floor 30 minutes after doors opened and showed each of the bands love. Brooklyn’s X Ambassadors had them clapping along from the start, filling the room with their take on pop – a blend of alt, some R&B, and even soul. Frontman Sam Harris has the chops to pull it off, playing auxiliary percussion and alto sax in addition to his vocal duties. It’s easy to see why Imagine Dragons have taken up their cause.

The Colourist could be headlining a tour of its own (and it sounds like it might be soon – the group let the secret out that it’ll be coming back to Kansas City in April). The Colourist sported some clean, beautiful pop sounds with dual male and female vocals. And again, more clapping along from the crowd. Colourist slowed it down for a ballad, and the lighters – and cellphones – came out. 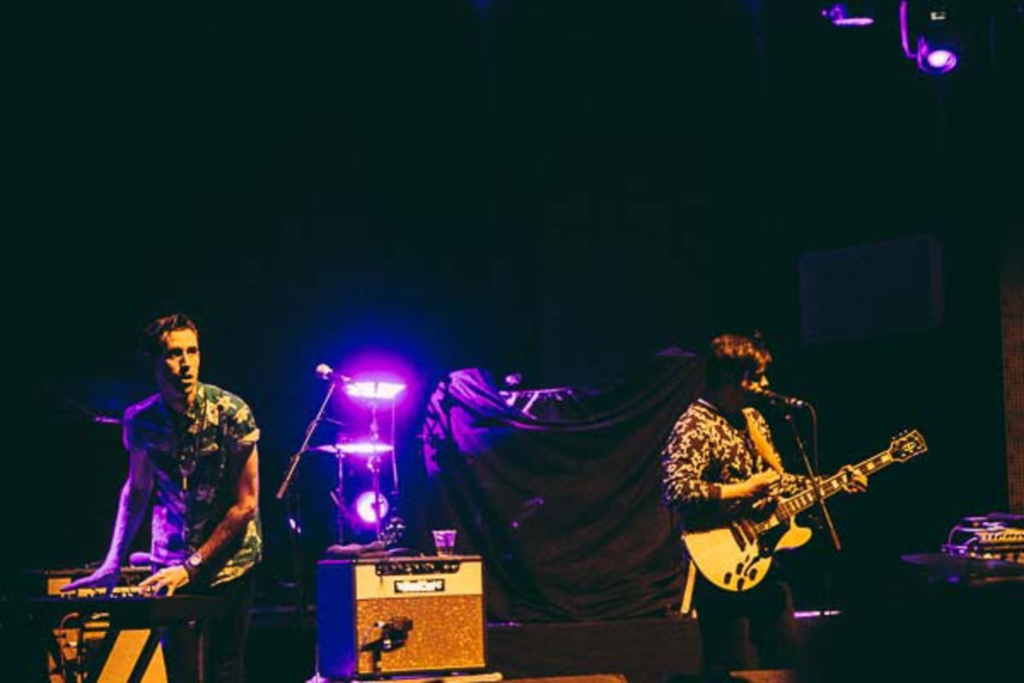 There was no doubt about who the darlings of the night were, though. Panic at the Disco lived up to the main event billing and put on a hell of a show. The band used every bit of the stage and didn’t let the pace drop. After a brief reprieve, there was a two-song encore. The now-shirtless Urie explained that newer “Girls/Girls/Boys” was about getting people naked and making bad decisions. Then they closed with their biggest hit, “I Write Sins Not Tragedies,” practically blowing off the goddamn door.

Leftovers: Before playing “Nicotine,” there was an old radio ad for Lucky Strikes played. That may have been a little too on-the-nose, but the clips between songs worked as a whole. The Uptown may have been the perfect site for the concert. Kids could rush up to the floor while parents and some of the older crowd could sit in the back or upstairs. By the end of the night, though, everyone was standing. During “The End of All Things,” the floor turned into a sea of cellphones. (Check YouTube and you’ll probably find a hundred clips of it from last night…. And seriously, that back flip was really damn cool.)