Pane in the Glass 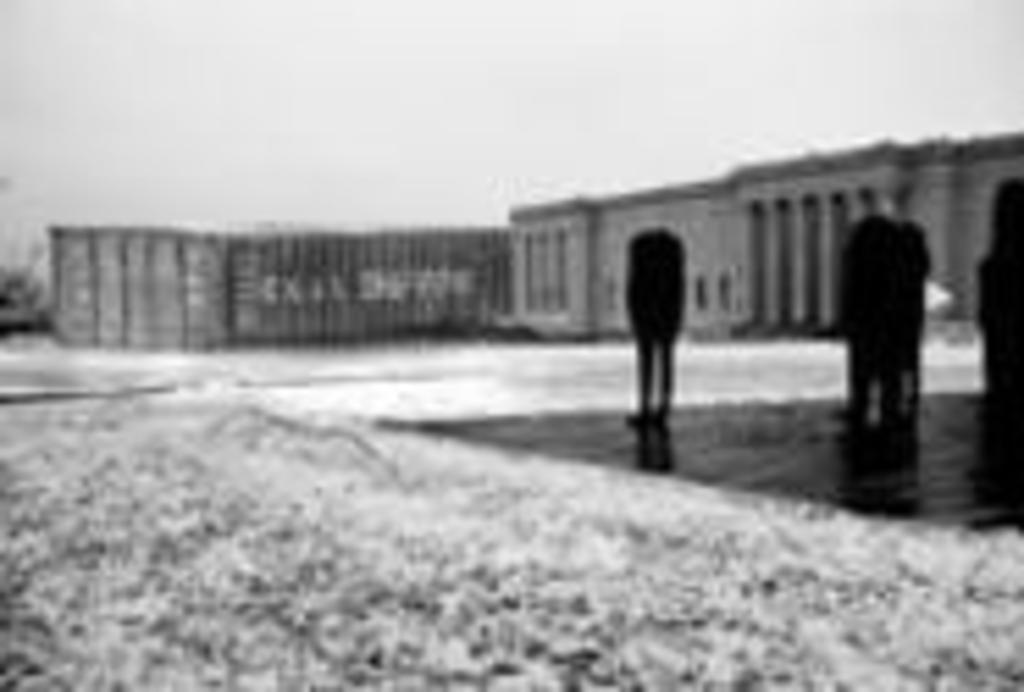 For some time now, the Strip has been hearing a lot of carping about the new addition to the Nelson-Atkins Museum of Art. So last week it took a trip to midtown to see the thing for itself.

Since 1999, the fancy expansion has been turning one of the most recognizable places in Kansas City — the neoclassical building with the giant shuttlecocks on the lawn — into a financial black hole, sucking down $200 million and pretty much all the oxygen out of Kansas City’s big-donor community.

But our cultured classes want something world-class, so they’re paying top dollar for a design by respected architect Steven Holl. Holl came up with a unique, southward-sloping addition to the museum’s east side, punctuated by five “lenses,” buildings that — in drawings and models, anyway — look as though they’re encased in frosted glass that will allow sunlight to pour into new underground galleries.

But now that some of that glass exterior is in place, some people aren’t happy with how things are turning out.

This skeptical sirloin decided to reserve judgment until it got an up-close gander. So the Strip arrived at the north side of the old museum last week and winced at the giant shipping container sitting next to it.

Gosh, we just hate those eyesores that construction companies always insist on parking at building sites for, like, forever.

This meat patty shrugged, figuring that was just the price to pay for a long-term project. But where were the lenses?

We walked around to the south side of the museum and saw the skeletons of the lower lenses surrounded by construction equipment. Then we got up close and started counting them. We knew from drawings that there’d be five.

The lower three were clearly just in their early stages — nothing but steel and some temporary corrugated Fiberglas panels. Lens 2, second to the top, appeared to have some glass panels in place, but where was the largest lens, the building most toward the north?

It suddenly dawned upon this critical cutlet that what it had taken for an ugly old shipping container was actually the building closest to completion!

We circled back to the north end of the museum to get a closer look at lens 1, a long, rectangular building with a slight bend in the middle that sits up close to the Nelson, nearly overwhelming it. The addition’s high walls are covered with frosted glass, all right, but it’s divided into narrow panes. That gives the building all the paneled, industrial charm of a Wal-Mart Supercenter.

No matter how hard this ribeye squinted or how far it stepped back, it couldn’t make the side of the building take on the graceful “ice cube” look that the museum had sold to the public years ago.

Oh, yeah, the Strip had read Steve Paul‘s meticulous, three-part series in The Kansas City Star last fall about how difficult it was to hang the fancy glass panels, which had been manufactured in Germany, to exact standards. So it knew how much work had gone into putting the exterior in place.

Steven Holl colleague Chris McVoy urged us to withhold our judgment until the project is really done.

“It’s kind of an awkward moment,” he told the Strip from his New York City office. “It’s a gangly teenager. We’re very happy, and we’re sure it’s going to do KC proud.”

Hey, it’s obvious that the project still has a long way to go. The whole area is littered with temporary barriers to keep out the public, semi trailers parked on a closed-down section of Rockhill Road, piles of earth that obviously won’t stay that way, and ugly sheets of plastic blowing in the wind.

Being the responsible roast that it is, the Strip called up folks at the art museum and at Holl’s shop to ask how much different the buildings will look before they’re done.

“That is the way it’s going to be,” Dana Knapp told this stunned sizzler. That was after the Strip had returned for an up-close look with the museum’s director of planning. We were standing outside the north building, pointing at the butt-ugly, glass-covered west face of lens 1.

Knapp had just finished telling us all about how landscaping would make it look like the glass emerges organically from the ground and how a reflecting pond would flatter the thing. But we were still looking at that wall of glass panes. That’s really how it’s going to be?

Yes, she nodded, looking like she wanted to fry this burger for its impertinence.

OK, so she’s a little sensitive about the subject. You might be, too, if the last six years of your career had been tied up in such a massive undertaking. Besides, if Knapp was a little touchy about our obvious dismay over the building’s outer skin, she had plenty to be happy about when we continued the tour.

The Strip wants there to be no misunderstanding: It was thoroughly blown away by how stupendous the addition is going to be for visitors who venture inside.

Whether art lovers enter from the new underground parking garage or through the old museum itself, they’ll end up in an underground nexus that should take their breath away. Even in a rough phase — without any of the black marble flooring or fancy lighting systems — the space was really breathtaking.

Sloping floors take visitors to angular spaces in the largest building, which will house a coffee shop, a multipurpose room and a reading space for the museum’s library. Galleries unfold to the south, surrounded by soaring walls that create spaces seemingly without a right angle in sight. We walked downhill, and Knapp pointed out each of the lenses that vault upward and direct light downward with graceful, arcing barriers that resemble ships’ sails. Then she took us up to the upper floor of the second lens and showed us a rocking view of the city and of the lens to the north.

We can see it. It will be magnificent.

As long as visitors can get past an exterior that looks more like a Price Chopper than the Prado.

We asked Knapp whether she would consider it a failure if, in the future, Kansas Citians decided the addition was a terrific place to visit that just happened to have a disappointing exterior.

“I see no possibility of failure,” she replied. “I expect people to find the entire project as charming as the interior. I believe in the project.”

Uh-hum. We leaned over to get a look at the fancy glass panels that are just going in on the upper floor of the second lens. There, we figured out the cause of the problem. Over most of its surface, each pane has an attractive frosty look. But at the edge, the glass turns clear, making the joint between the panes obvious.

But maybe we just don’t have enough artistic imagination to see the building without the seams. Ice cube? It looks more like the broad side of a barn.

Knapp admits that to the untrained eye, the museum’s addition may be a bit much to take in. “It is hard to understand. It’s a hard building to get your head around,” she said.

We’re sure that’s just what homeowners in the area will be thrilled to hear. We can just see them dealing with out-of-town visitors after the museum’s 2007 grand opening.

“Hey, Vern, what’s that mall you got next door?”

“It’s a hard building to get your head around, Joe Bob. Just trust us that inside, it’s a hoot.”