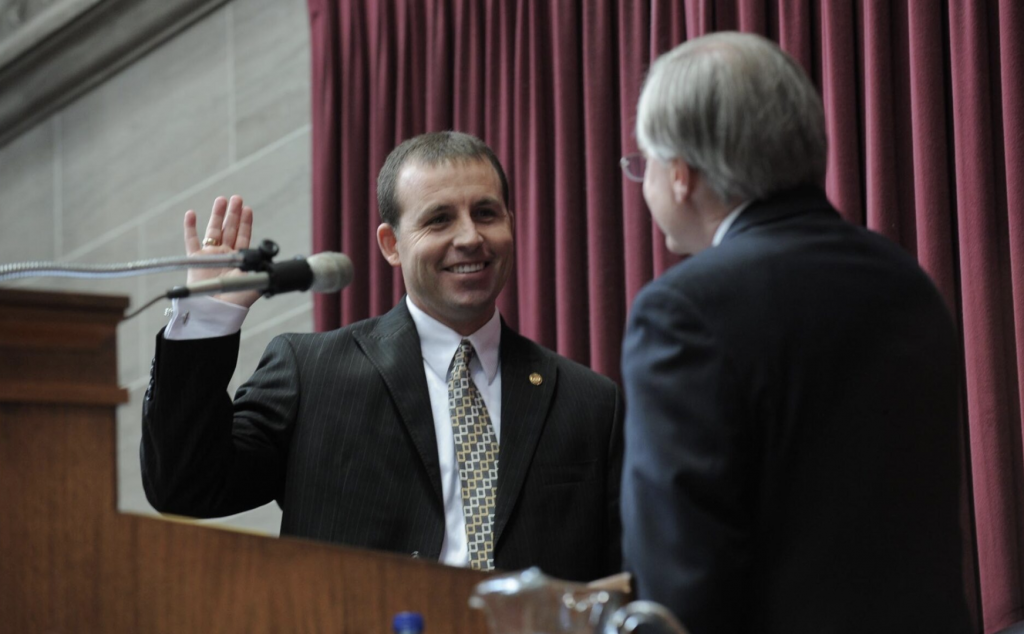 Steve Tilley was sworn in as Missouri House Speaker in 2011. He resigned in 2012 to become a lobbyist and political consultant. // Courtesy Missouri House Communications

A pair of political action committees connected to a Missouri lobbyist under FBI scrutiny have begun taking steps to account for nearly $170,000 in cash that went unreported on disclosures to the state ethics commission.

The discrepancies with PACs connected to Steve Tilley, a former lawmaker and longtime adviser to Gov. Mike Parson, were first documented last month by the St. Louis Post-Dispatch’s Tony Messenger. He found that the PACs reported cash balances in early 2021 that were significantly lower than the total reported at the end of 2020 without any corresponding spending to explain the decrease.

Since Messenger’s report, one of the PACs — MO Majority PAC — has filed amended reports with the state ethics commission documenting additional spending. The largest new expenditure appears to be $75,000 worth of shares the PAC says it owns in a Perryville-based bank called Reliable Community BancShares.

Tilley has done this before, using leftover funds from a campaign committee he established during his legislative career to buy $900,000 worth of shares in the same bank in 2011.

MO Majority PAC also reported a number of contributions that it had previously left off its disclosure forms.

For example, its revised disclosure report for the last quarter of 2020 reports 18 contributions to candidates and committees that were previously unreported, totaling around $20,000.

Though the donations didn’t show up on MO Majority PAC’s original disclosure reports, the candidates who received them appear to have included them on their filings with the ethics commission.

The other PAC highlighted by Messenger’s story, called Missouri Growth PAC, has yet to file any amended disclosures.

Tilley is also connected to at least four other political action committees — Missouri AG PAC, Missouri C PAC, Missouri Senior PAC and Conservative Leaders of Missouri. Each are bankrolled by Tilley’s clients, and regularly donate to myriad candidates of both parties.

The practice of funneling money through his PACs to political candidates has drawn scrutiny in the past by federal investigators.

In 2017, one of Tilley’s clients, Gardner Capital, donated to four of his PACs. Those PACs then made donations that combined to total $10,000 to Independence Mayor Eileen Weir.

Just days after the donations, Weir and the city council voted to spend nearly $1 million to buy a golf course for a solar farm in a joint venture with Gardner Capital. The money used to purchase the golf club came from another Tilley lobbying client, the city’s utility, Independence Power & Light.

Tilley would later go on to represent the company that sold the golf course to the city.

Numerous officials in Independence would subsequently report being questioned by the FBI about the donations and the contract, though everyone involved denied any wrongdoing.