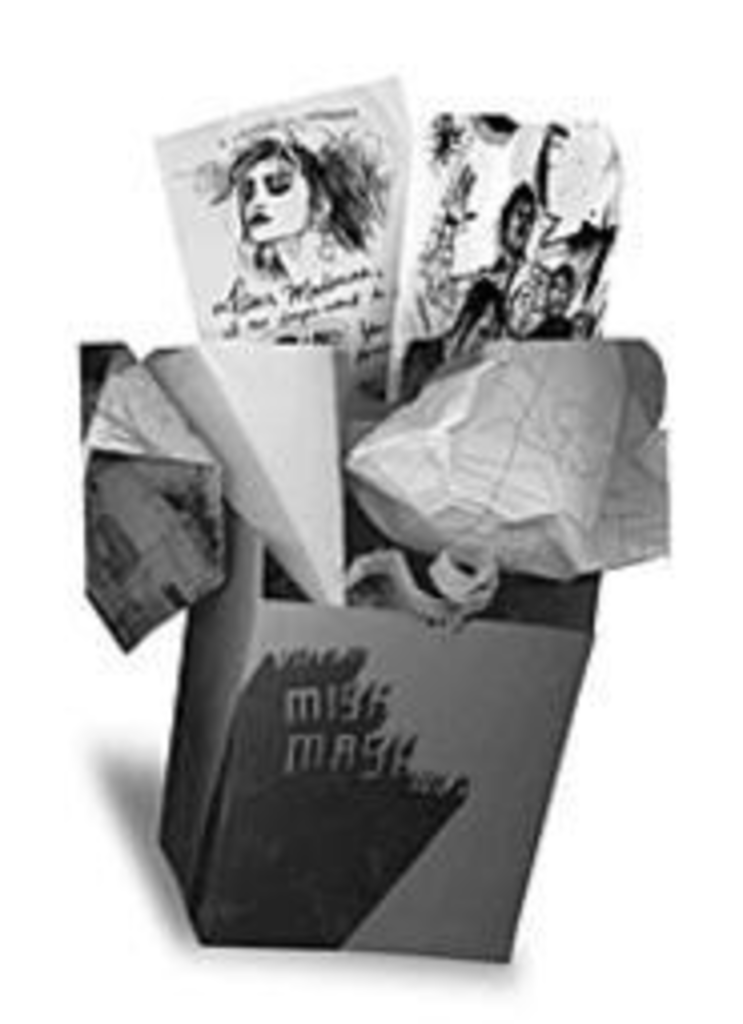 Blue Ribbon Press could be a band. This seven-member artists’ collective, which specializes in T-shirts, posters, stickers and buttons, could set up one kick-ass merch table in the back of a bar somewhere.

Does the fact that these kids don’t play music together mean that they should be denied the rock-and-roll lifestyle? Not according to Kyle Sears, who has gone to enough shows in his day to recognize that underground musicians have it pretty good. “They can pretty much do whatever they want. They travel around and hang out with random people and live off of them,” he reports with envy. And we can’t argue — being in a band does appear to have its perks. As common lore would have it, that shit gets you laid ALL the TIME.

Sears and his six buddies are hoping to secure honorary band status by entertaining people with art. Touring and crashing on kind strangers’ couches is only one part — albeit a major part — of the collective’s ultimate vision.

Although for now, Blue Ribbon Press is just a place on the Internet where you can get neat-o prints by local artists (sales only recently spilled into the three-dimensional world of boutiques), people are murmuring about the collective. At a graphics conference in New Jersey, its members worked a booth during the day, then went to afterparties, where they discovered that people were talking about them and that everyone there assumed they were in a band. That’s probably because the silk-screened T-shirts looked like promo stuff. “We weren’t promoting a band,” Alex Schubert says. “We were just promoting ourselves.”

Now, maybe you think these youngsters have their priorities in the wrong place. Maybe you think they’re like the people behind those sneaky kids TV shows (such as Thundercats) that got yanked from the air because they were created to sell toys. But these artists will earn their prime couch real estate and forthcoming cult status because, like people in bands, they will do their best to show you a good time. They want to make your experience rock every bit as much as the food they’ll be taking from your fridge, if that’s all right with you.

Art as entertainment. There’s an idea. It’s one that Blue Ribbon’s Miranda Young has been exploring since the now-notorious show she put on back in 2002 called Boys Vs. Girls. For that show — which admittedly ended badly, with unwanted graffiti going up on nearby downtown buildings that were in the process of being rehabbed — she and her fellow coordinators hung affordable art on the walls, got a quirky band to play and separated the art, both visual and performance, into two rooms. One contained work by men, the other work by women. The women baked cookies while the men wrestled and grilled hot dogs.

Young has a variety of motivations for putting on this kind of event. But the obvious reason also is the best. “It’s fun,” Young says. Why stare at a band playing instruments onstage for an hour when you could be milling about looking at art and competing for your gender-based team’s ultimate superiority?

Why put art on walls and leave people to walk around aimlessly, chitchatting at their leisure, when you could have a carnival outside on a nice day? This is one of Blue Ribbon’s ideas. Each artist will set up a booth with games, and game winners will get T-shirts or posters. Another idea is a bike rodeo, in which the artists will modify bikes to make them more exciting, and then, well, let the bike be your steer. The idea isn’t fully formed yet, and it’s true the event could be very dangerous. But if people did not like danger, nobody would go bungee jumping. And unlike bungee jumping, a bike rodeo would be interesting.

The crew recently sponsored a mail art exchange, with 41 people from Kansas City and elsewhere putting stamps on their artwork and sending it through the U.S. Postal Service. In theory, each participant should have received forty pieces of art in the mail. I’m still waiting to see if that pans out, but of the work I’ve received, one of my favorites is a card with the Wizard of Oz‘s Dorothy silk-screened onto it in a bright jade-green. “I wish I knew where home was,” it says. Bottles of poison — or booze — sit beside Dorothy. Part of what makes mail art so great is knowing that your neighborhood mail carrier gets to see it, too. “The idea is to involve the Postal Service,” confirms Blue Ribbon’s Jacob Sharp.

Then there’s the ongoing ‘zine project Mish Mash. The current issue is a screen-printed cardboard box with art inside. Each contributing artist printed a comic or illustration on paper and folded it up, sort of like origami. It’s very tiring to read, unfolding all those little pieces of paper and folding them back up again. But if you open Mish Mash in public, as I did, people will start wishing you happy birthday, and that is cool. Mish Mash can make any day your birthday.

The downfall of ‘zines is that the work does not always jell. Mish Mash solves that problem by separating the artists’ submissions into tidy little packages. Cody Critcheloe’s letter to Madonna about how it’s over between them is folded like a note you might pass in seventh grade. A one-panel comic by the experimental duo known as Icecreamlandia makes a three-dimensional heart shape as it unfolds. Inside is an uptight-looking family staring back at you. You think you’re the viewer, but you’re actually the artist — you’re taking a family portrait, looking at these people through a lens. Also, you’re Mexican. The grandmother figure is saying to you, via word bubble, “Now it used to be a cold day in hell before we’d hire a Mexican to take our family portrait, but oh my how times have changed, and you seem like a nice enough fellow. Do you know our gardener?”

Will Blue Ribbon ever get to tour with this kind of stuff? More important, will it work here as a business?

Hard to say. Art-school graduates have a way of creating short-lived collectives that thrive until someone moves away and everyone else moves on to other projects. But some of them last. Even those that lose numbers and change form can take things to a new level here in town. These Blue Ribbon kids are serious, meeting with successful artists who double as businesspeople, trying to be smart and to plan realistically. They hope to some day have their own facility, not only for making stuff but also for teaching the public how to make stuff. They’ve already secured a major piece of equipment: a four-color silk-screen press.

Sears, for one, already has had his first learning experience in failing to get an idea approved by a board. Porter Arneill, Kansas City, Missouri’s Public Art Commissioner, also is a professor. He set up a mock board, asking students to make presentations to secure pretend city funding for a pretend public art project in Southmoreland Park. Sears tested his carnival idea. It didn’t exactly fly.

Arneill, himself a sculptor, is intrigued by the art carnival idea nonetheless. He likes that these cutting-edge artists are, he says, “infiltrating” the idea of the craft fair, mixing high art with low art. And the nonpermanent aspect of it, though tricky because taxpayers like to see something concrete in exchange for a portion of their paychecks, makes their idea intriguing. “They’re looking for a niche,” Arneill says. “They just haven’t figured out what it is yet.”

Yet as much as we like sculptures that sit there and look pretty every time we walk by, we need more action. If Blue Ribbon is half as reliable as its namesake beer, we should be getting plenty. And so should they. Fuckin’ rock stars.