‘Overture: The Musical’ digs up and dramatizes the history of the Kansas City Philharmonic 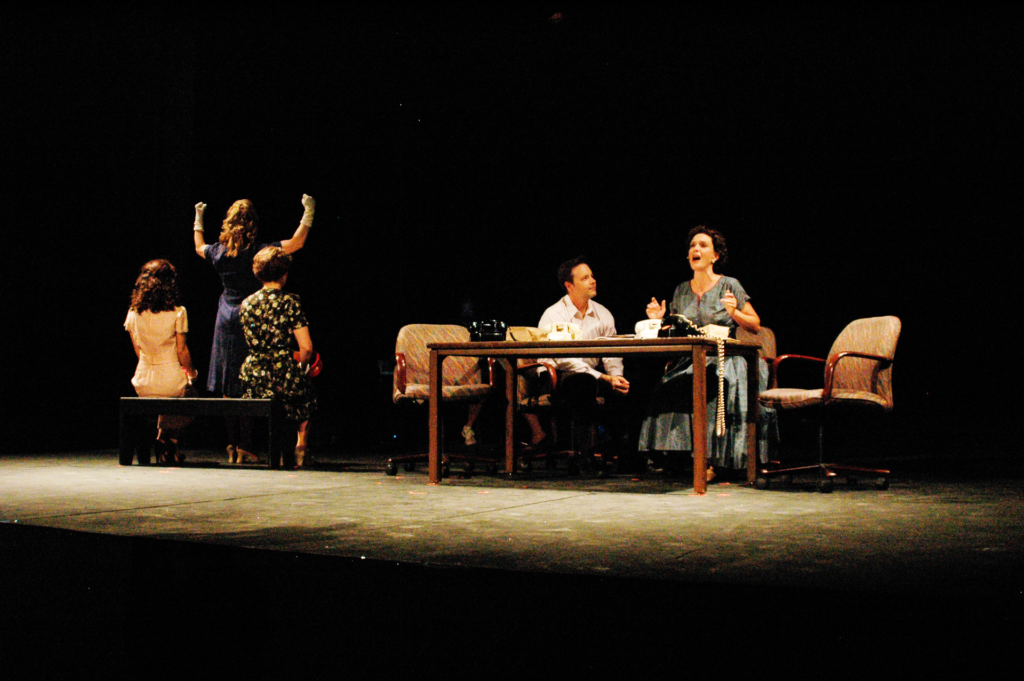 A prolific performer and songwriter, Krista Eyler once wrote a tune called “Favorite Sounds in the World,” inspired by the mental image of a woman on a staircase listening to an orchestra tune up. Eyler let her mind wander and began to think maybe there was more to this woman’s story. Maybe this woman lived in Kansas City. Maybe the orchestra was here, too.

Some research introduced Eyler to the history of the Kansas City Philharmonic, and as she dug deeper, she realized it was perfect fodder for a musical. The Philharmonic, which operated from 1933 to 1982 (it preceded the present-day Kansas City Symphony), was financially insecure throughout much of its existence. But this economic peril brought together a dynamic set of folks determined to keep it alive. Eyler honed in on one particular season — 1953-54 — and, along with Barbara Nichols, started writing a script.

They ended up with “Overture: The Musical,” a behind-the-scenes look at the people, passion, and creativity required to operate a major arts organization. It premieres September 21 at the Arts Asylum.

A song, a struggle, and a love story make up the foundation of the show. Appropriately, “Overture” begins with the aforementioned orchestra-tuning song, sung by a character named Lily (performed by Eyler), who works in the Philharmonic’s office. Lily is desperate to be involved with music, though she is losing her hearing. She’s also falling in love with Christopher (performed by Joel Morrison), the Philharmonic’s assistant conductor, who has become disenchanted with the art form.

“I needed someone who was frustrated in his position and had kind of lost his whole love for music,” Eyler says of the character. “I’m such a big fan of old book musicals, where there’s always a romance. I love those kinds of stories because they seem kind of redemptive to me.”

Lily and Christopher are the musical’s only fictional characters. Everyone else is based on a factual person involved with the orchestra. Eyler admits to taking some poetic license, though as a former reporter, she did her research first. Using William Everett’s history of the Philharmonic, Music for the People, she tracked down newspaper articles and interviewed living relatives. Some lyrics in the musical (Eyler wrote the lyrics and the music, but collaborated with Nichols — who directs — on the script) are pulled directly from newspaper stories and fundraising letters (pleas, really) from the time.

“When you’re writing anything that surrounds people who were real-life Kansas Citians, you have to do your best to honor the facts you have in front of you,” Eyler says.

Members of the Philharmonic’s Women’s Committee were instrumental in keeping the organization afloat, and we also meet some of those key players: Marie McCune (Erica Baruth) and Clara Hockaday (Stasha Case), who, with Enid Kemper, founded the Jewel Ball. The Kemper family isn’t represented in the musical, Eyler explains: “They [the Kempers] did so many amazing things for Kansas City. But I wanted to give attention to names that hadn’t necessarily been recognized in current times.”

“Overture” is a full-length production: 17 songs that Eyler, along with Michalis Koutsoupides, orchestrated and arranged for an eight-piece ensemble. Inspired by the classics of musical theater — Rodgers & Hammerstein, Jason Robert Brown, Stephen Sondheim, Andrew Lloyd Webber — Eyler also draws from the works of Frederic Chopin and Anton Dvorak. “Those are things that my musical heart gravitates toward, so I always hear them in my ear,” she says.

The show’s first act was staged as a teaser at Fringe Fest earlier this summer and was the fourth-highest-attended show of the festival. They’re hoping for that same enthusiasm at the Arts Asylum. The Philharmonic, Eyler says, was “a labor of love and time and effort” — a group of people who came together to, as the show states, “save something beautiful” in Kansas City. In bringing that story to life with “Overture,” Eyler and company are doing much the same.