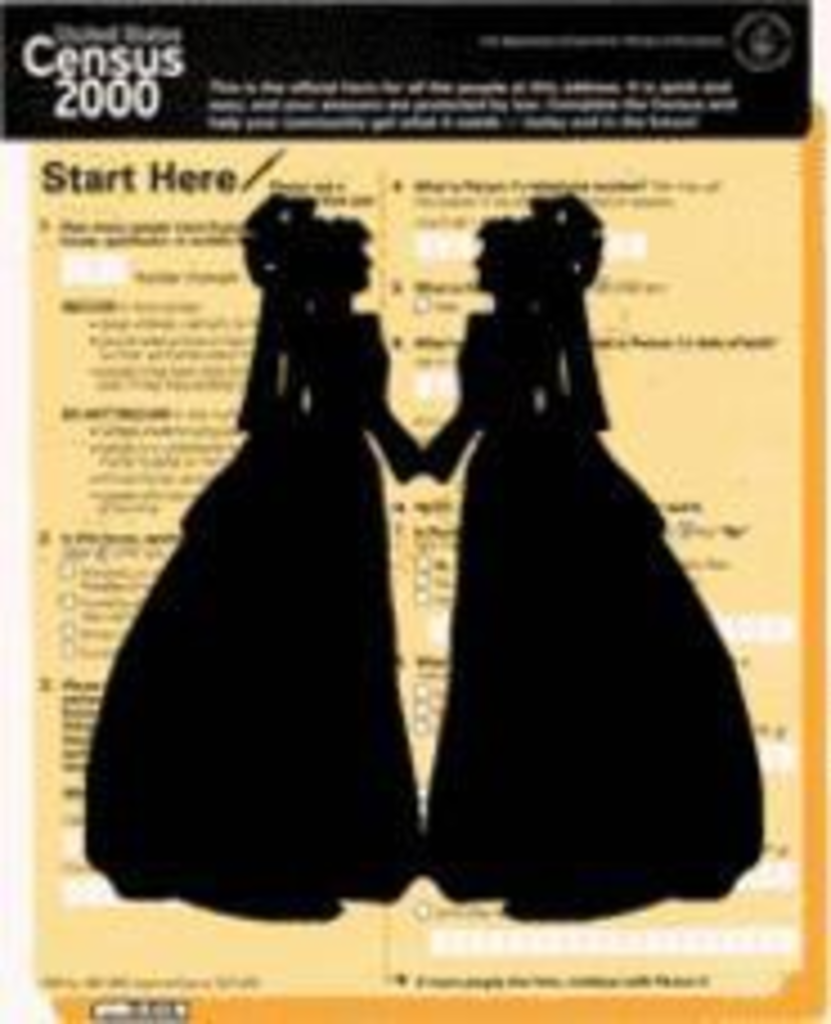 It was a storybook Jewish wedding. The grooms picked out beautiful wedding bands and found a rabbi willing to marry a gay couple. They crafted a “brit ahavah,” or covenant of love ceremony, by rewording traditional wedding prayers. They carefully chose words that would flow from Hebrew to English, and they had a “ketubah,” a Jewish wedding contract created on colorful parchment by a non-Orthodox calligrapher in Canada. On the day of the ceremony, they each stomped on a glass, and they cried.

After spending their honeymoon in Provincetown, Mass., a tiny town on the tip of Cape Cod known for whale watching and bed-and-breakfasts, the newlyweds went home to their tree-lined neighborhood in Lawrence, Kan. When the census form arrived in their mailbox recently, Mike Silverman, 27, and David Greenbaum, 29, checked the “unmarried partner” box to describe their relationship.

“It’s kind of awkward — there’s this kind of code word — and there is no formal type of recognition by the government for this type of relationship,” says Silverman, who knew which box to check only because several national gay and lesbian advocacy groups have started a campaign called “Make Your Family Count.” The National Gay and Lesbian Task Force and the Institute for Gay and Lesbian Strategic Studies, both based in Washington, D.C., and other organizations have been urging same-sex couples to declare their committed relationships on the census rather than check the “roommate,” “other relative,” or “other nonrelative” boxes. The Kansas City chapter of the Gay and Lesbian Alliance Against Defamation (GLAAD) focuses on media coverage of the gay and lesbian community, but its members personally support the census efforts, a spokeswoman says.

The groups say this year’s census will be the first time same-sex couples who live together can be accurately counted by the U.S. government. In 1990, the first year the Census Bureau added an “unmarried partner” choice — for two unrelated people who share living quarters and have “a close personal relationship” — many same-sex couples checked the “husband/wife” box instead. This confused the census computers, which simply changed the sex of one of the respondents, resulting in a severe undercount — only 150,000 same-sex couples nationwide.

This time around, though, the Census Bureau has fixed the glitch, so when couples choose the “husband/wife” category, though both are of the same sex, that answer automatically will be changed to “unmarried partner.” That, along with publicity efforts, should mean a more accurate count this time around, say representatives from gay and lesbian advocacy groups. But that’s not the same as saying the cultural and political atmosphere for gays and lesbians will become more tolerant. “Somehow, I don’t think (U.S. Sen.) Jesse Helms all of a sudden will see that there are all these gay couples out there and change his mind,” says Silverman.

Ann Northrop, a member of the board of directors for the Institute for Gay and Lesbian Strategic Studies, says part of the reason for 1990’s undercount was that there was no organized push to make people aware of the “unmarried partners” option and that many gay and lesbian couples were unsure how to answer the relationship question. Others, she says, were afraid to mark that option because of rampant antigay attitudes.

“What was the world like 10 years ago?” she asks. “There were far more people closeted and utterly unwilling to talk about it. There are so many more gay people ‘out and proud,’ as we say, today.” Northrop, who is single, wrote “lesbian” on the margin of her census form — not because she expects her sexual orientation to be counted but to make a statement.

“I would say that this is a fantastic opportunity that can produce a gold mine of information, but it is still only a slice of our population — those who are in relationships and live together,” she says.

Nonetheless, hard data is the first step toward greater visibility for gays and lesbians, which could lead to favorable legislation and more legal rights down the road and help gay and lesbian leaders get a better picture of that community, Northrop says. “We need to examine stereotypes with real information. We need to stop running the movement on anecdotes and start running it on hard data,” she says. “How many of us are there? Where are we? What is our income? How many of us are raising children?”

The Census Bureau, however, says that the “unmarried partner” designation is intended not as — nor could it be — a way to get an accurate count of gays and lesbians in the country but instead to gain better understanding of family units.

“It’s not a (sexual orientation) question, it’s more of a relationship question so we can better understand how people function as a unit, how they spend their time and resources together,” says Martin O’Connell, chief of the fertility and family statistics branch of the U.S. Census Bureau, explaining that there is a vast difference between the behavior of a couple, who might, for instance, jointly buy a house or pool their finances, and that of two unrelated roommates who operate independently.

That’s why one Web site, www.WeCount.org, which is devoted to the census effort, lists a variety of complex family scenarios to coach same-sex couples on answering the questions to best describe themselves as a family unit rather than a collection of unrelated individuals.

Take the hypothetical William and Mark, for example, a gay couple with three children. The two oldest are William’s nieces, whom he legally adopted before meeting Mark. The youngest child is the couple’s foster son, whom they plan to adopt. They lease an apartment, and Mark, the primary wage earner, is listed as the primary tenant on the lease. William, who works part time, is the children’s main caregiver.

The site goes on to show all of the ways William and Mark could fill out the census. One scenario would focus on the children, with William listing himself as “Person 1” because he is officially related to all three children, and Mark would have to call William’s nieces “nonrelatives.” Or Mark, the primary wage earner, could be listed as Person 1, and he could list the nieces as “stepson/stepdaughter,” but that designation is usually reserved for legal marriage situations. The site goes on to list other couples and their situations to guide same-sex couples through filling out their forms.

The importance of accurately describing the family unit is important, say the Census Bureau and the advocacy groups, partly because federal, state, and local legislators often use the data. “I’m sure politicians and lawmakers look at the data not only to find numbers but also to get an idea of their constituents to better serve them,” O’Connell says.

One Pleasant Hill, Mo., couple, Vera Elleson, 65, and Mary Lou Kaltenbach, 55, lives on 10 wooded acres south of Kansas City with their dog, four cats, two turtles, and two parakeets. They hope that the census will force politicians to realize that gay and lesbian families exist and are just like any family.

“There’s a myth that we’re just a small, weird portion of the population, that we’re strange and freakish and we can’t fit in. That’s not true,” Elleson says. “This is a natural way for us to live and it’s a very loving and very caring way. It’s not a life that is devoid of love and happiness and friends and joy and social consciousness. Those are just some of the myths that are propagated.”

That recognition of gay and lesbian families, the women say, is a first step toward changes in laws and equal rights for same-sex couples.

“I feel you have to start somewhere,” Kaltenbach says. “I think the federal government really needs to start sitting up and taking notice. We’re here, we’ve always been here, and we’re always going to be here. And figures from the census are used to shape public policy.”

Kaltenbach’s goals for the gay and lesbian community include a federal law that forbids discrimination based on sexual orientation, and she says politicians often try to deny the existence of large numbers of gays and lesbians so they can brush off that issue. The census data should help, she says.

“Businesses can and do get away with discrimination against people because they’re gay or lesbian,” Kaltenbach says. As an employee in the assessment office at the University of Missouri-Kansas City, Kaltenbach says her co-workers are “great” and very accepting, but she is incensed that the university still does not officially prohibit discrimination on the basis of sexual orientation.

Both the Kaltenbach and Elleson and Silverman and Greenbaum couples want the government to officially recognize their relationships, and they talk about the everyday problems they face without that official stamp on their unions. Kaltenbach recently hung up the phone in frustration after a call to the American Automobile Association to try to get joint auto insurance, which costs less than two single policies. “The gentleman asked who would be the other driver and I said, ‘Vera Elleson,’ and he said, ‘Are you related?’ and I said, ‘Yes, we’re committed partners,’ and he told me we wouldn’t be able to get joint insurance. Well, I told him I don’t want AAA then. I just feel, really, that’s grossly unfair,” Kaltenbach says.

Both couples have had to have legal power of attorney documents drawn up so that they would have decision-making rights should their partners be hospitalized. Silverman and Greenbaum, who have spent hundreds of dollars in lawyer fees, had to get legal advice when purchasing their home to make sure that if one of them were to die, the other would get the home. “As a gay couple, we have had to jump through hoops and pay a lawyer a lot of money to get some of the rights that straight couples get for free,” Silverman says.

The Silverman-Greenbaum pair says that the government needs to catch up with the private sector, which is making progress, but still is not all the way there, as their wedding preparations proved. They joke about their experience registering for wedding gifts at Target, where the process was computerized, so one of them had to sign up as the “bride.”

“Mike was the bride. He was a blushing June bride,” Greenbaum says, laughing, even though the odd situation illustrates a point. By contrast, HomePlace offered a way for same-sex couples to register for a “commitment ceremony” for participant one and participant two. That, Greenbaum and Silverman say, is the way things should be.

Regarding the government, both couples want to see full same-sex marriage rights so they can receive the more than 1,000 federal benefits attached to legal marriage. Some of those benefits deal with inheritance, alimony, child custody, and immigration privileges for spouses.

Silverman says he resents the stance some right-wing politicians have taken: that allowing gay couples to marry would defile the institution of marriage. He points to the February wedding fiasco on the Fox network special Who Wants to Marry a Multi-Millionaire?, which disgusted a large percentage of the American public. The groom, Rick Rockwell, whose former girlfriend had taken out a restraining order against him, chose curvaceous, blond nurse Darva Conger out of a gaggle of women who paraded in front of cameras in a Miss America-style pageant. The pair said their vows then and there, then split up while on their Caribbean honeymoon. She got the marriage annulled less than two months later, but not before cashing in the $35,000 wedding ring.

“Everyone who gives the issue any thought can see there’s something very wrong when two strangers — one of whom is a wife-beater — can get married on public TV without ever having met each other, and two gay men living together in a committed relationship are strangers in the eyes of the law,” Silverman says.