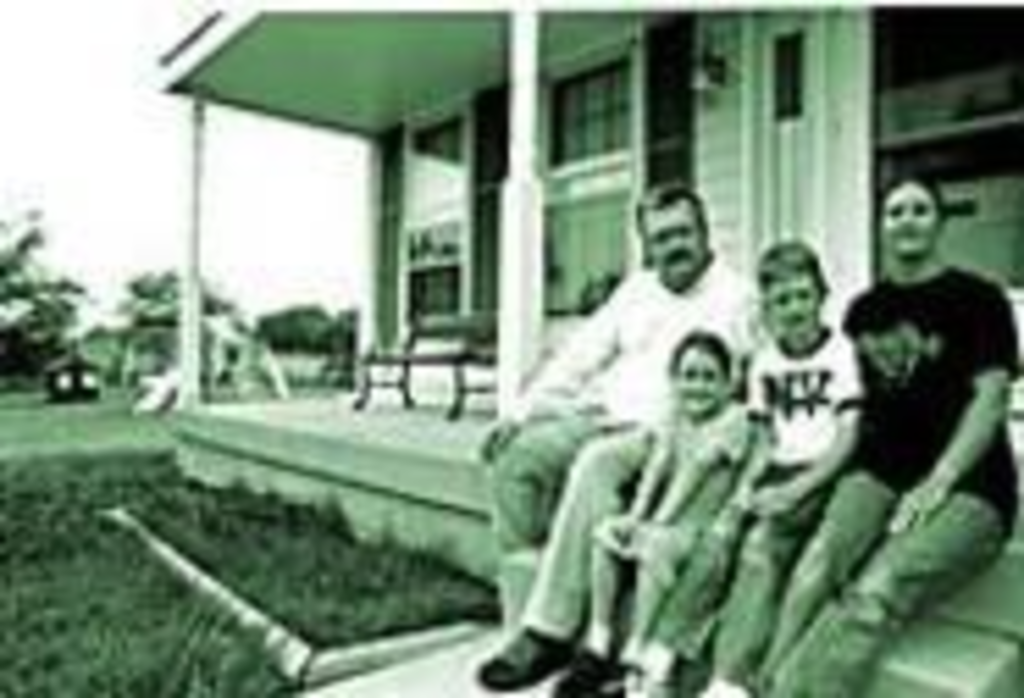 
When David Dobbins and his family moved into their home in a semirural area of the Northland, they expected development to move their way. “To move out here and believe development was never going to make it this far would have been foolish,” Dobbins says. “There’s just no way that all this was going to remain like it was.”

His home is a modern two-story at the end of a long gravel driveway. Although Dobbins can’t see many of his neighbors from his house, a short drive north on Staley to Hardesty and up to 108th Street reveals homes nestled in forest and along streams. Some stand alone in suburban-style squares of green grass. All of the houses are different, built at different times and reflecting the dreams and wishes of their owners.

Dobbins takes a sweeping look at what spreads out around him — and soon will be gone. To the west, grazing land grows prairie grass punctuated with aging farm buildings. Hardwood groves stand on the top of hills and in the valley where North Staley Road winds through. An old barbed-wire fence defines Dobbins’ property to the north along a shaggy hedge of mulberry, Virginia creeper, and tall bluestem. Beyond lies a tangle of young trees, rife with ivy, brush, and a stand of sassafras.

But nature will soon take a beating. The Kansas City, Missouri, City Council recently approved Pine Grove, a 365-acre, 799-home development that may bring 2,400 people to the area. Behind Dobbins’ home is open ground, extending down a long hill into woods and fields to I-435, then to the rolling hills beyond. Pine Grove will fill the space from his property north and east to the interstate.

Dobbins is less concerned with how he feels about the encroachment upon property than with how the Northland is developed. “I have been an electrical engineer all my professional life, over 15 years,” he says. “I have worked on scores of buildings. We knew when we moved out here three years ago that development would happen. The problem is that the city and over 3,000 volunteers spent several years developing the FOCUS report, and now they (city council members) are not following it.”

The FOCUS (Forging Our Comprehensive Urban Strategy) Kansas City Plan, a stack of volumes more than a foot and a half high, recommends that quality of growth over amount of growth be the overriding factor in citizens’ and the city’s determination of what development occurs. The Northland Plan section of FOCUS recommends that the city encourage diversity of mixed-income, mixed-use development with attention to transportation, economic development, and existing community. With regard to transportation, FOCUS recommends developing along existing infrastructure rather than building new and wider roads typical to suburban development on vacant land. Dobbins points out that even after a decade of steady growth, almost 75 percent of vacant land within the city limits is north of the Missouri River.

Just two roads lead into Pine Grove: Hardesty from the south and Staley Road (the proposed Shoal Creek Parkway) on the west. Both are narrow and shoulderless. Hardesty forms the frontage road for I-435. Staley winds through the hills, woods, and open fields. Both roads are studded with one-lane bridges.

“Part of FOCUS is to make sure that the existing topography, identity of properties, open spaces, and development be paid attention to,” Dobbins says. “Pine Grove doesn’t do any of that. It is a large, traditional suburban development in a leapfrog fashion that has no buffers, no transportation element, and doesn’t preserve much of anything.

“FOCUS was not a priority to the city council when they approved the plan. If they don’t follow it here, it’s going to be tough to do it elsewhere.”

Dobbins says he was chosen as the de facto leader for the Staley Farms Neighborhood Association. He testified before the City Council Planning, Zoning, and Economic Development Committee, which recommended Pine Grove to the full council. He then testified before the city council in the general vote on the plan. Despite his professional, considered presentations, Dobbins says, both times he was met with “outright indifference” on the part of city council members, particularly at-large councilmembers Bonnie Sue Cooper and Teresa Loar. Videotapes of the May 3 Planning and Zoning hearing and the May 31 city council meeting reveal Loar and Cooper’s impatience with Dobbins’ testimony. “Everything about Cooper those days was discouraging,” Dobbins says. “She was angry some of the time; other times she repeated she ‘had heard all of this before.’ Her whole body language, eye rolling, and demeanor indicated we were not going to get anywhere.”

In an interview, Cooper says the council listened “to those people five times, and we heard the same thing over and over. I think they were just snatching and clutching at straws. Then they brought up that we were not adhering to FOCUS and that the development was leapfrog.

“Well, I can tell you if we deny every project just on this kind of (FOCUS) consideration, you are going to stop all development. FOCUS is not the law. How do you determine leapfrog? You fit places into areas already zoned for the project. You can’t get into the developer’s private business and tell them what to do. You can’t do every project out north as mixed-use, not in the vast expanse of land up here.”

Fourth District councilmember Jim Rowland says he voted against the Pine Grove development primarily because it did not follow FOCUS. (He was the only councilmember to vote against the project on May 31.) “We are not supposed to be adding to the disconnect between people and communities in our city,” he says. “People should look to truly build a strong sense of community. You have to look at development in a holistic way. We have to assist in preventing developing in a leapfrog fashion in three directions in this city, putting people further out. If there are community-building and transportation components to the process, there will be development where we want it to occur, not like this — not with complete disregard for FOCUS.”

Other Northland council members, such as Ed Ford and Paul Danaher, were more accessible throughout the planning process, Dobbins says, but FOCUS arguments fell on deaf ears. “They said that it was in-fill development,” he says. “As I remember, in-fill was building on vacant lots in existing neighborhoods, not filling in giant spaces.”

Dobbins has several problems with the development, and he relates them to FOCUS. First, the density of the project will overwhelm the existing community in place around Pine Grove. The development, he says, will be an island unto itself, without necessary parkland, retail business, or grocery stores, increasing driving around the development. In addition, representatives of the Kansas City, Missouri, Police Department expressed concerns with the need for increased manpower for law enforcement. North Kansas City, Missouri, School District officials also have said they were concerned about the capacity of schools in the area and the increased traffic on inadequate roads.

“The problem is that the city council picks and chooses from FOCUS,” says Kathy Cruz, who works with the North Star Neighborhood Association, a group representing neighborhood groups in the Northland. “They say it is not law and they don’t have to use it. They say they can’t get into the private business of developers, but if that’s true, then what good is it for them to decide anything in development?

“Why did they spend all that time with FOCUS? When it comes to FOCUS and developers, developers always win. It seems the city council is more worried about increasing their tax revenues than what citizens really want.”

Loar says, “No matter what, we need single family homes. There is still need for suburban tract homes. From a strictly urban planning perspective, we expand tax base by building homes and businesses in city limits. This is not any horrible abuse of FOCUS. Even if it (the development) is by itself now, there will be growth all around in five years.”

Ford says city staff members and the City Plan Commission review every development plan, based on FOCUS principles, before it reaches the city council. “I argue that this is in-fill development rather than leapfrog. Sewer, water, roads, and whatnot are in place. People get the idea that Pine Grove will build 350 homes in a year, but it will be 20 to 50 homes a year. Depending on interest rates and the housing market, if potential buyers don’t move there, that will tell us if the development will work.”

Dobbins kicks the gravel in his driveway and squints toward the fields to the west. He says that despite the city council’s rebuff, he and his neighbors want to make sure that FOCUS remains at the center of the development process. “This is not something for election time or until a developer comes in with a lucrative project,” he says. “FOCUS is for the citizens of this city, giving them options in where they will live and how they will live, rather than be at the mercy of developers and their politicians.”