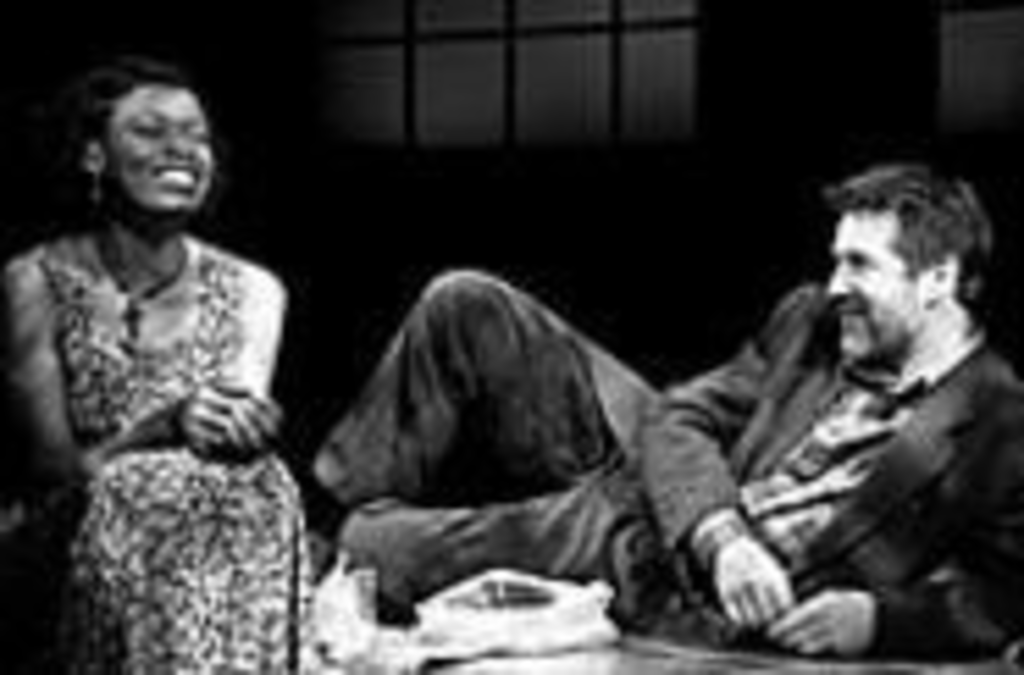 Last week’s opening at Union Station’s City Stage fell on a telling anniversary. Eleven years ago, on April 6, 1994, a plane carrying the presidents of Rwanda and Burundi was shot down as it neared the airport in Kigali, Rwanda. Within hours, ethnic Hutus in Rwanda’s military began slaughtering ethnic Tutsis and moderate Hutus. Eight thousand were killed that day. By July, more than 900,000 had been murdered and countless others injured and left homeless.

In Sonja Linden’s play, I Have Before Me a Remarkable Document Given to Me by a Young Lady From Rwanda, making its U.S. premiere here with its Kansas City Repertory Theatre production, it’s five years after the slaughter began, and Juliette (Kenya Brome), an attractive, soft-spoken Tutsi in her twenties, has come to London after surviving the carnage. She’s written a journal of the events — a fairly dispassionate one, it turns out — that seemingly requires the neutral eye of a guy like Simon (Paul DeBoy). A poet and failed novelist, he’s hoping to find enlightenment by overseeing a writing program for the clients of a refugee center.

Juliette and Simon, oddly, “meet cute,” as characters in Meg Ryan movies tend to do. That Simon is too self-centered to be all that inspiring (or interesting — he’s an uncomplicated bleeding-heart liberal) may be Linden’s metaphor for the way the Western world ignored Rwanda. Or it may simply indicate that the play is rather clumsily structured.

Through scenes that fitfully move among two-person dialogue, the expression of internal thoughts, and chats with the audience, Simon and Juliette’s relationship fails to fully develop. Yet it has the potential to form something sweet. He’s initially shocked by her poverty — she lives meagerly in a gray-on-gray room in a hostel — then sympathetic to it. And he is slowly taken with her charm and beauty. She’s rightfully suspicious of his self-proclaimed goodness (if he knows he’s a shit, he never fesses up), but she does manage to fine-tune her prose. At least he’s genuine when he tells her she has stories to tell, and her book becomes less a chronological document than a wrenching memoir.

The play’s central scene comes on the anniversary of the start of the genocide. Alone in her room, Juliette lights a candle for one dead relative — and then nine more. Thankfully, director Michael Bloom doesn’t overplay the moment with music or sound effects. The scene is, in fact, so quiet that the first strike of a match sounds like a jet engine. Victor En Yu Tan’s lighting and Whitney Locher’s costumes are also quietly effective. Michael B. Raiford’s set of hardwood floors and brick walls is true to the modesty of the refugee center and Juliette’s room, but their proximity to each other also feels clumsy.

Ultimately, Juliette is able to relate to Simon the details she has locked deep inside her. They’re as horrible as we suspect yet, despite Brome’s heartfelt performance, partly sealed in a vacuum. Linden’s refusal to tell the story with one specific device makes it difficult to connect with the characters or, more problematically, the genocide. You have to wonder if any writing for the stage — at its core, fictional and narrative — could be appropriately devastating.
Postscript: Local theater people have been buzzing about young actor Justin Van Pelt’s starring performance in Eubank Productions’ Hedwig and the Angry Inch, John Cameron Mitchell’s outrageous rock musical about a transsexual on the verge of rock stardom, madness or both.

It was clear at Sunday night’s closing performance that I was late to be let into the cult of personality surrounding Van Pelt. The Just Off Broadway space was packed with people high on the anticipation of being shocked and awed. Now having witnessed Van Pelt’s performance, I totally get it. He is a revelation.

Van Pelt inhabits Hedwig with an honesty and brazenness that stings the skin. In 90 riveting minutes, he moves the title character through coy flirtatiousness and palpable bitterness, ending at some point along the edge of sanity. But the last song, when Hedwig strips herself of all things frilly and cosmetic, she’s an open wound that begs to be cleansed and redressed.

Should Hedwig ever be revived in New York, the city of its origin, any producer worth his or her salt would be advised to look at Van Pelt, whose prior work in the Unicorn’s Convenience last winter only hinted at his talent and charisma. Those yet to be swayed have four more chances; the show has four upcoming dates at The Granada in Lawrence (1020 Massachusetts Street): April 16 and 23 at midnight, and April 22 at 8 p.m. and midnight.