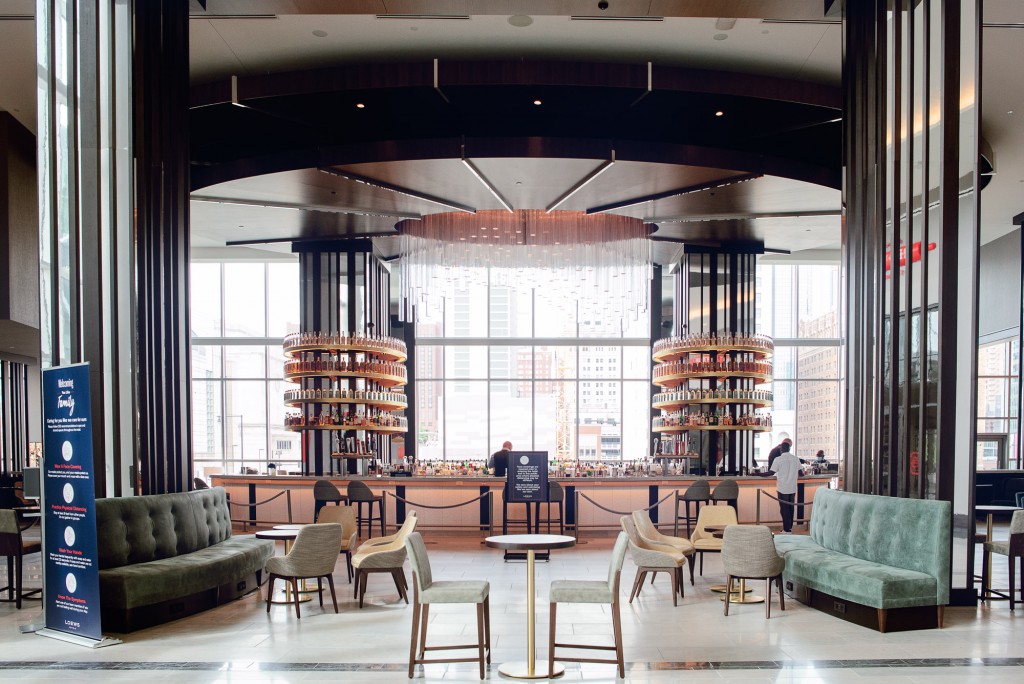 A drink at Loews Hotel’s swanky bar feels like a private showing—even though the bar is built to seat dozens. // Photo by Travis Young

It’s cocktail hour on a Tuesday evening, and I am social distancing at the new Loews Kansas City Convention Center Hotel.

This is not difficult. My husband and I are two of just four guests at a bar meant to seat dozens. The place is gleaming and well stocked. The two bartenders on duty are charming; we enjoy a long conversation with one about his new kitten and puppy. It feels like we’re getting a private showing for a swank place, except that we’re not.

At this moment, guests should be shoulder-to-shoulder at this bar, buying drinks and helping to fulfill the promise of the 24 stories and 800 rooms above us. The $325 million downtown Loews Hotel was supposed to be the piece that would complete Kansas City’s convention infrastructure. Build it, and guests and exhibits would soon fill the adjacent Bartle Hall and other sites around town. Visitors would spread their tourist dollars around at restaurants and attractions.

Disaster, however, got here first, in the form of a worldwide pandemic. After years spent assembling a byzantine—and risky—financial package, then fighting off a citizens’ revolt over public incentives in the package, it was Kansas City’s great misfortune to open a hotel and conference center at a time when no one is traveling or conferencing.

The grand opening date was supposed to be April 2, with more than half of the rooms booked with guests in town for a volleyball tournament. Instead, it opened June 1, with just a trickle of guests, mostly people from around the area wanting to get out of the house for a night or two. What could be more microbe-free than a never-used hotel room? 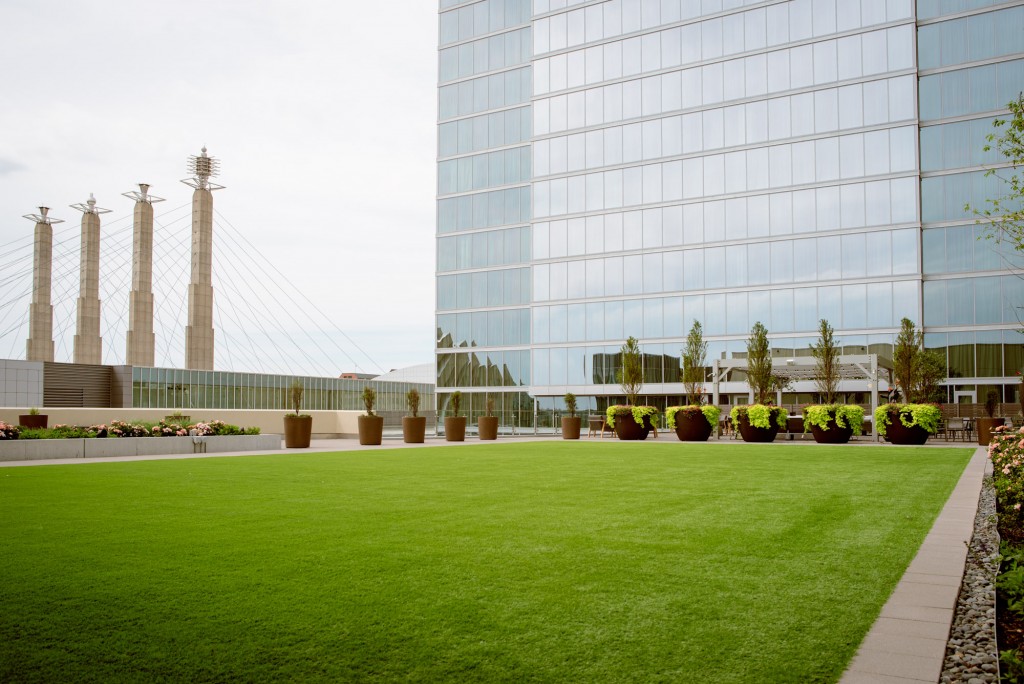 Loews Hotel’s seventh-floor terrace is empty: No conferences, means no guests at the convention center hotel. // Photo by Travis Young

On the evening I visited, a terrace on the seventh floor was deserted, the adjacent bar dark and locked at 5 p.m. Staffers told us it would open later in the week, when the latest ripple of staycation guests arrived to take in whatever action is or isn’t happening in downtown Kansas City.

(This is the place in the story where I was expecting to insert a comment from someone in Loews management, probably a rehash of earlier statements about the company’s pride in the hotel and its commitment to Kansas City. I was told through a communications person, however, that Loews would have no comment. Maybe because it’s too hard to put a positive spin on a situation this bad. Just my guess.)

Loews is just one star in Kansas City’s galaxy to be brought low by a pandemic that started in China. But it is a big, bright star. And so it stands as a monument to the risk the city takes when it risks the public’s money and trust to woo visitors from distant parts. 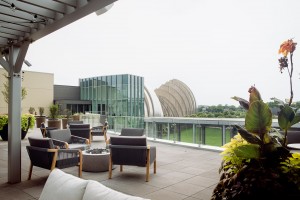 A view of the Kauffman from the Loews Hotel rooftop terrace. // Photo by Travis Young.

Kansas City’s attempts to become a visitors destination have been visited by bad luck in the past. The city’s first convention center, Convention Hall, opened in 1899 and burned to the ground a year later. In 1979, hours after top international architects visited Kemper Arena and praised its design, Kemper’s roof collapsed in a rainstorm.

Still, in a show of what leaders at the time dubbed the “Kansas City spirit,” workers rebuilt Convention Hall in 90 days, in time to host the 1900 Democratic National Convention. Kemper Arena’s roof got repaired. And the city’s leaders have held on to the belief that civic pride goes hand-in-hand with buildings meant for tourists and visitors.

Every city-backed bond issue and tax break is an outgrowth of the magical thinking that developers promote and that elected representatives, and sometimes voters themselves, eventually buy into. That thinking says that Kansas City is always one step away from becoming a tourist mecca—or at least competing with the likes of Denver and Indianapolis.

Before work began on a $150 million new ballroom for Bartle Hall, a leader told a reporter for The Pitch that the new addition would double the city’s convention business. It didn’t. So the builders and financiers and dreamers set their sights on a new convention hotel. That would do it, they said.

Katheryn Shields, the city council member who chairs the Finance Committee, was running for office in 2015. She opposed the city’s subsidies to the hotel at the time, because she didn’t believe the rosy projections about convention traffic. At least one model assumed the city would double its number of room nights. “How are we going to get so many conventions we double our room nights?” Shields asks.

We won’t, not any time soon. 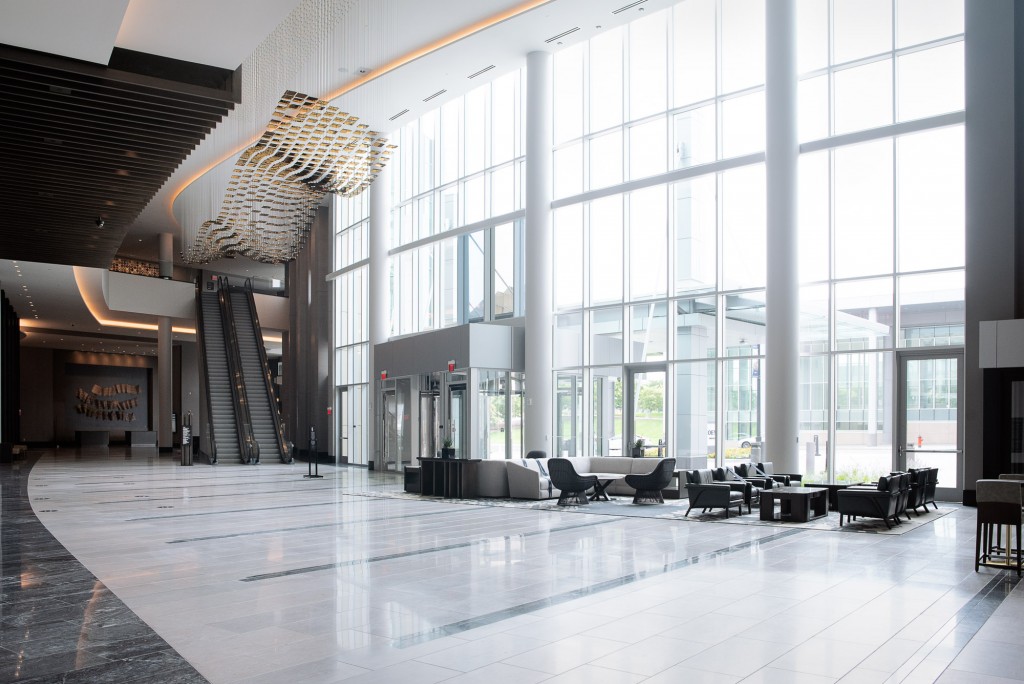 Hotels, restaurants, and tourism attractions are uniquely vulnerable to shocks in the economy, and the coronavirus is a shock of immense magnitude. So far this year in Kansas City, taxes from hotel revenues have fallen by about 80 percent, and restaurant revenues by nearly 45 percent. Visit KC, which promotes conventions and tourism, says 128 meetings, with the potential of 286,000 guests, have canceled since March.

But that won’t stop contractual arrangements from coming due for the new Loews Hotel.

For the city, that begins with debt service on a $35 million bond that it sold—about $2.6 million this budget year, according to Tammy Queen, Kansas City’s director of finance. When they approved the financing package, city leaders said the payments would come from the convention and tourism fund, which collects taxes from tourism and restaurant activities. 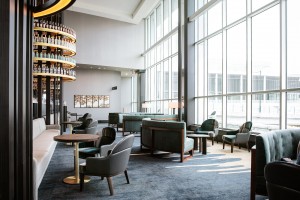 The view from the lobby bar. // Photo by Travis Young

City council members in 2015 also agreed to pay management and catering contract fees for the hotel—a contractual obligation that received little notice at the time, but which Mayor Quinton Lucas now says could amount to as much as $100 million over 20 years.

“The $35 million bond was all anybody talked about,” Shields says. “But then they said, ‘oh yeah, there’s this catering contract.’ It grows exponentially. This is a huge payment of city dollars that I think was for no purpose except to hide the fact that we weren’t just putting in $35 million on the deal.”

The catering fees were also supposed to be paid from the convention and tourism fund, but Queen says that account was out of balance even before revenues cratered in the pandemic. Sales taxes from restaurants and hotels had dipped a bit, and the city kept piling more obligations on the fund.

Now, it looks like Kansas City will have to transfer up to $5.1 million from the general fund to the convention and tourism fund to pay Loews-related expenses, Queen says.

A comparison isn’t completely fair, because investments in convention and tourism business are supposed to help local businesses and generate sales tax revenues. Still, it’s tempting to think about the many ways the city could use an additional $5 million this year to help the hundreds of families struggling to afford decent housing. It could build about 30 modest homes on vacant lots, for example. It could double the current $2.8 million allotted for minor home repair, and still have money left to pay for health inspectors to investigate unsafe conditions in rental units.

As it is, Kansas City must meet its obligations for Loews and other tourist facilities, even though it will gain few, if any, benefits in the way of increased business and sales taxes.

Visit KC, which is, after all, in the business of promoting hope, notes that as of August 1, 56 events it helped to book are still on track to take place this year, with a possible attendance of 30,000 visitors. That’s about one-third of what had been booked. 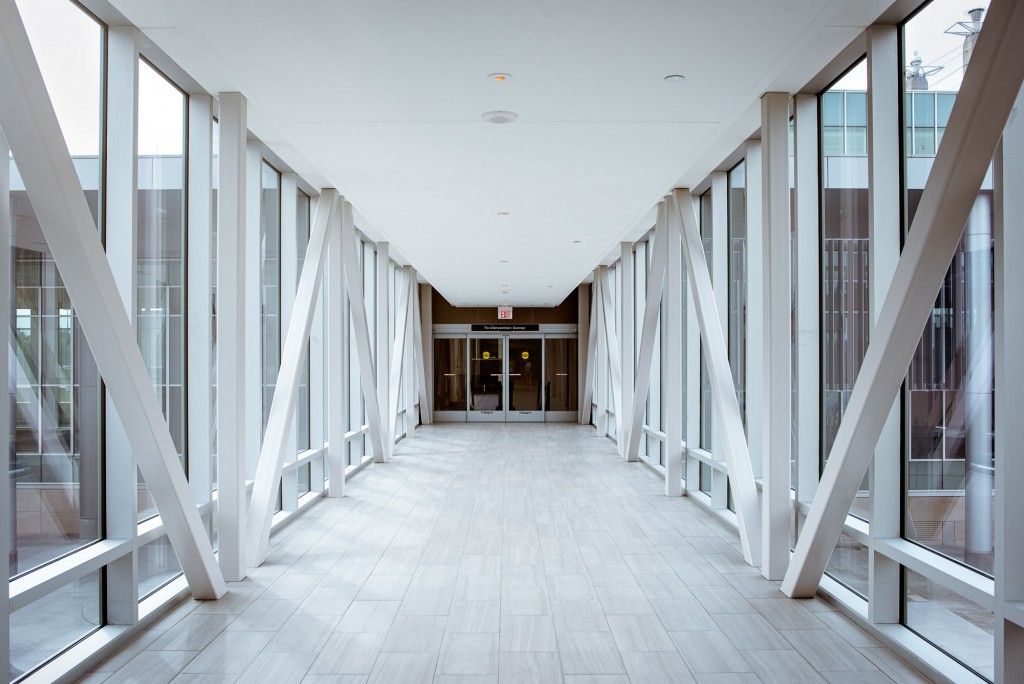 The empty hallway leading to the Convention Center would be bustling in another world without COVID-19. // Photo by Travis Young

A number of conventions booked dates in Kansas City for the first time, in anticipation of the Loews Hotel being open, Visit KC officials tell The Pitch. Those include the American Occupational Therapy Association, the Kubota Tractor Corporation, and the African Methodist Episcopal Church. They are booked far enough out that they could still take place if the COVID-19 threat dissipates enough for people to gather.

For now, the friendly bartender at Loews sets about drawing a beer for my husband and mixing a whiskey cocktail called the “horsefeather” for me. Across the lobby, staffers are busy preparing a brasserie restaurant for a delayed opening. The place is all dressed up, but the guests aren’t showing up for the party.

Maybe everything will get better soon. People will get over their fear of flying, and companies will decide that meetings need to take place in person instead of by video conference. The convention calendar will fill up. The city will meet its expensive obligations toward the Loews Hotel financing. The old “Kansas City spirit” will come through once again.

Or maybe all of that is more wishful thinking.