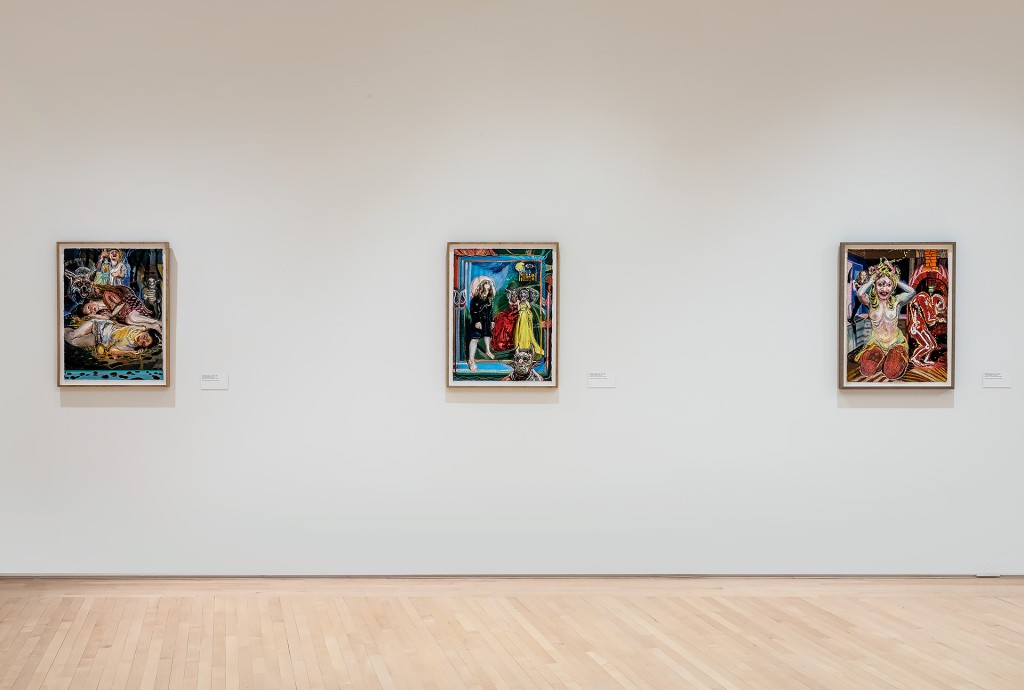 What’s your favorite fairy tale? Do you like modern-day kids’ versions, or the old adult stories, filled with sex and violence? If you’re reading The Pitch, we’re fairly certain we know the answer. 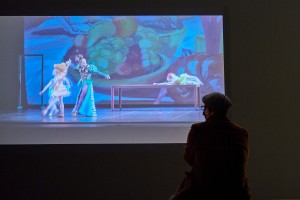 Natalie Frank: Unbound, on view now at the Kemper Museum of Contemporary Art, presents the recent decade of Frank’s work. At the center of this exhibition is a body of work interpreting four different sets of fairy tales: those of the Brothers Grimm, those of Madame d’Aulnoy, The Sorcerer’s Apprentice tale as told across history’s many iterations, and the 1954 erotic novel Story of O by Anne Desclos. As Frank excavates this fantastical history of story-telling, she reclaims and recontextualizes the narratives. Her work is compelling for the same reason it is harrowing: for hundreds of years, women have been telling stories about the horrors and hardships they face.

The exhibit, and Frank’s work, has incredible scope. Her elaborate creations are all rooted in deep research and storytelling, and have accompanying collaborations in books, ballet, and once even in wallpaper.

“While her primary materials are as ancient as they are modest—paper, gouache, pastels—her visual practice magically elevates those basic elements by transformatively fusing them with layers of feminist agency, mesmerizing materiality, and archaic folklore,” writes Alison Gingeras in the exhibition’s catalog.

Frank’s agility with gouache and pastels is awe-inspiring. Figures on the page swirl and recede and peek and loom and transform. The lurid colors are equal parts threatening and enlivening. The compositions swell with energy, without compromising elaborate details that demand close inspection.

Many of the drawings are more reminiscent of night terrors than fairy tales. Though, if the original purpose of fairy tales was women warning other women about the dangers and obstacles they faced, then the haunting and disturbing qualities in these drawings are only appropriate.

Christina Brungardt—director of the Madison Museum of Contemporary Art, a collaborator on the survey—writes in the exhibition catalog: “Early folk tales, which became the source materials for Tales of the Brothers Grimm, were primarily produced by women and conveyed as part of an oral tradition to forewarn and forearm other women of the dangers of a world in which they had no power over their own bodies, finances, or homes.”

The unsettling physicality of the figures in Frank’s drawings reflects how our culture alienates us from our bodies, how we lose coherence with ourselves. Frank masterfully combines figuration with abstraction, bodies melding and fading away, not always whole or discernable. 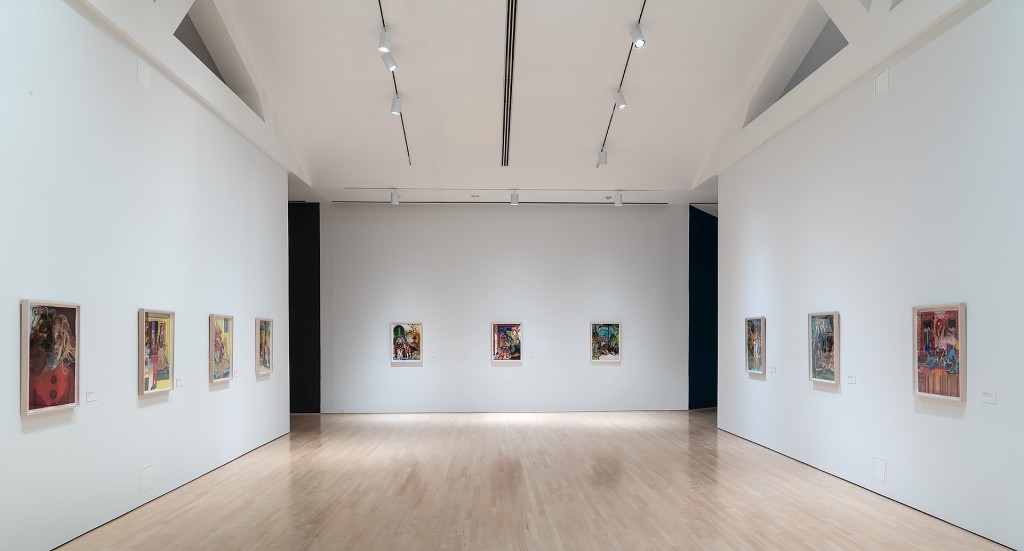 While the stories of the Brothers Grimm may have originally been told by women, they have since been refracted through this lens of centuries-old patriarchal culture. These stories can’t be told outside those dynamics of gendered power, and we’d be remiss to not acknowledge how those dynamics shape the stories themselves.

Frank’s collection of drawings based on tales by the Brothers Grimm feature colors so rich that they are unreal, over-bright like a fever dream. Red dominates: the red of danger, of blood, of lust. The drawings are carnivalesque, with swirling colors and exaggerated figures. These are not Disney stories—the characters in these stories face cannibalism, incest, rape, and violence. 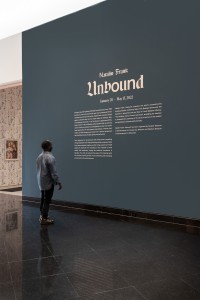 The wall text here proclaims, “Natalie Frank transforms the unsanitized versions of these tales into feminist images that elevate heroines and villainesses to celebrate female agency. She focuses on the overt sexuality, brutal violence, and extraordinary grotesqueries connected to women’s bodies in visual translations that are an archly feminist act.”

These translations of violence and grotesqueries appear as an offering saying: “Here are our traumas; here is what we have survived.” They are less triumphant, and more harrowing documentation of sorrows.

In the Brothers Grimm story “All Fur,” a princess escapes from her incestuous father, a king, disguised in a patchwork cloak of animal furs. She is later revealed to another king (or perhaps the same king, the story is ambiguous on that point) as the beautiful princess that she is. Her disguise is pulled off against her will—a moment portrayed in Frank’s “All Fur III.”

In the drawing, the mask of the beast slips off to the side, revealing her passive face underneath—no anger, no joy, no defiance, no ambition. Her blushed cheeks, parted lips, big eyes, and curling golden hair look every bit the white patriarchal ideal of beauty.

Her eyes focus on something off to the side, just past the viewer’s shoulder. She looks resigned as the king snatches off her disguise. She is desolate and alone. She had resisted, but it was futile, and she is once again under the control of a king.

Here is a figure for whom much has been lost, and she has nothing left to give in a fight against the powers that be. 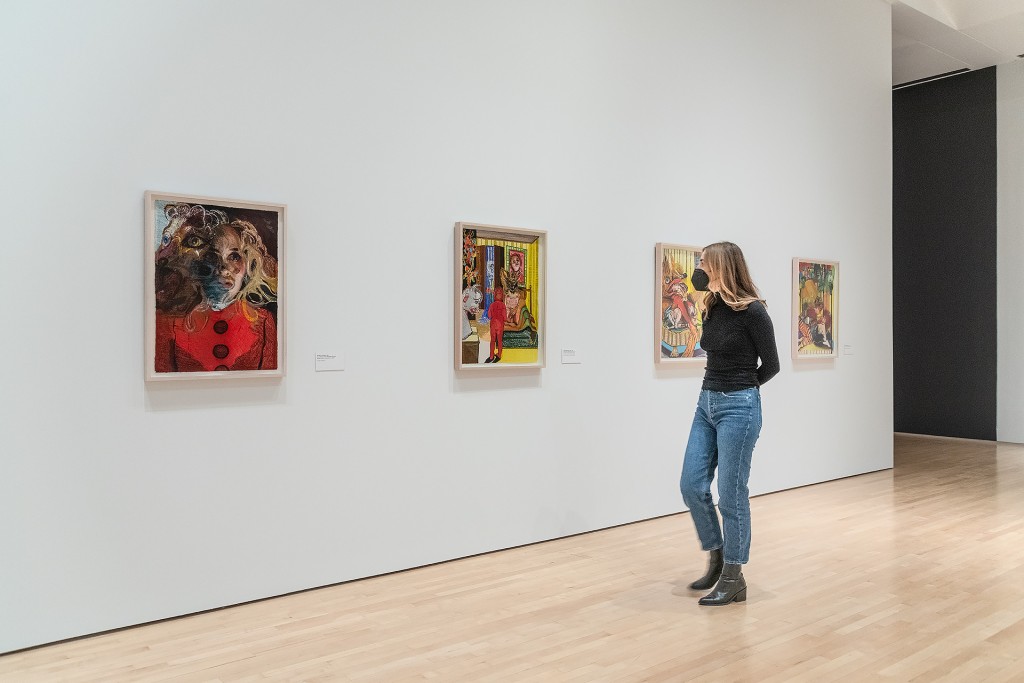 In the 1690s, French aristocrat Madame d’Aulnoy hosted salons with women of a literary persuasion. There, the phrase fairy tales (or “contes de fées”) was born, as they spun stories of princesses and fairies, women with magic and power, living with both virtue and iniquity.

One of the themes in fairy tales, and across Frank’s drawings, is transformation. An embrace of change, in all its horror and necessity. The stories inherently reject the status quo. The swirling gestures and figurative instability in Frank’s drawings evoke a lack of stasis.

This is Frank’s most recent collection of work, and her drawings here show more complex experiences and emotions for the heroines of the fairy tales.

In the drawings of Finette Cendron, a Cinderella-like tale, we see our heroine transform her fear and rage into calm power across four canvasses. 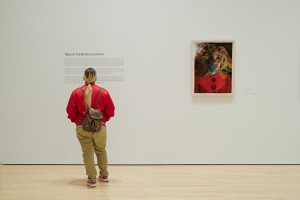 The two drawings of Belle-Belle ​​ou Le Chevalier Fortuné show a princess in disguise as a knight taking joy in her adventures. As she is sentenced to death, she looks directly into the viewer’s eye, confident, unabashed at her actions or her revealed breast, unbowed by the threat of death.

The sweeter, lighter colors in the Island of Happiness signal some moments of joy for our heroine. And the White Cat has bold agency as she holds a hunting rifle, eyes lifted to the distant sky.

But there is bleak horror in this collection, as well. “White Cat IV” shows the titular character of the tale The White Cat—a woman who has been transformed into a cat, with a blade raised over her, the shadow looming across her body, her hand raised and eyes wide in fear. The image is one of violence and fear. White Cat appears here as an object awaiting the violence of the agent off the page.

In the story, the White Cat told her prince to cut off her head, allowing her to be reborn as a woman. In the original telling, it is her decision. She persuades him to comply, and even then, he does it with a shaking hand.

Frank’s “White Cat IV” shows none of White Cat’s choice in the situation. It is resonant in so many ways: the fear, the sense of scrambling backward, of folding in on oneself. But it is curious that Frank did not choose to draw a dignified White Cat, in control of the moment, resigned to the pain that would allow her to be reborn as herself once more. 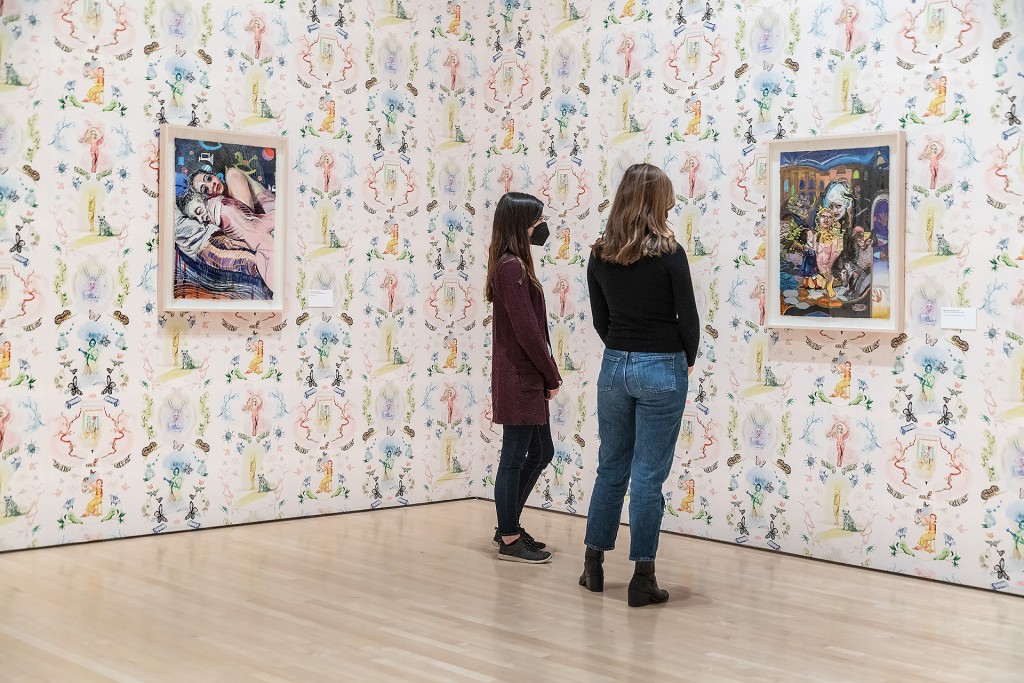 Frank does not shy away from the psychosexual content of those centuries-old fairy tales, such as in the strange morphing and melding of bodies in bed in “Little Red Cap” (also known as “Little Red Riding Hood.”)

Frank has faced some backlash for the works in this collection. An exhibition of these drawings was canceled in New York when the gallery owner became concerned that the content would be triggering for survivors of abuse and violence. 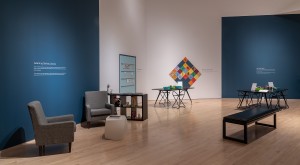 While many have hailed the novel as one of sexual liberation, Frank’s drawings do not evoke any sense of O, the heroine, owning and enjoying her own sexuality. Instead, she looks desolate, empty, defeated; except for in one, the most explicitly sexual drawing. Her eyes are giddy, but it feels like a caricature; a performance for her (presumably male) lover(s).

What may be triggering here is not simply the depiction of a woman in sexual situations, but the dejection on her face as they happen. That’s how O appears here: resigned, and only displaying glee when successfully performing in her expected role as a sexual object, and thus pleasing those who hold power.

What is empowering about this story, or about these drawings? Depicting ‘woman + sex’ is not inherently empowering. Simply the fact that women are sexual beings is not revelatory. O may be at the center of the frame, her lovers at the periphery, but that is not enough to indicate any sort of autonomy over her life.

However, how do we keep that agency and empowerment alive in visual representation of those acts, when they may visually appear the very same as oppressive and degrading acts done in harm and hatred of women?

Portraying a woman in a submissive role in such a way that subverts our patriarchal culture is a delicate tightrope walk, and here, Frank missteps. 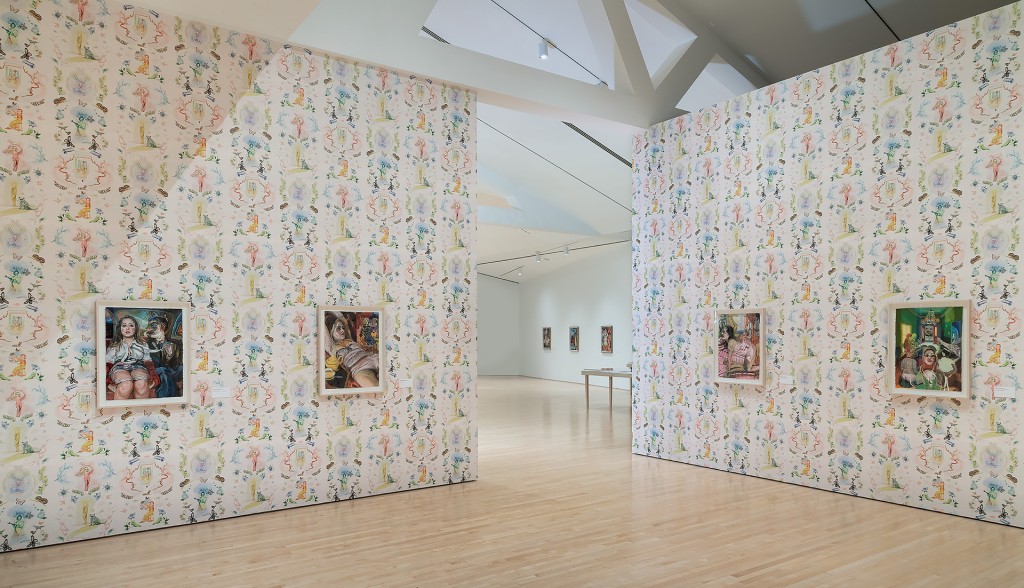 Her drawings grapple with the ugliness of being oppressed, of being a victim, of being a survivor. The ugliness of the fact that, after hundreds of years, this violence and trauma, and objectification persists. Though told with allegory and fairies and talking animals, there is much here for us to relate to in the present.

The defiant claim that these are empowering reclamations of women’s stories elides the softness necessary to really connect with these stories, the softness to feel how much it hurts that we are still being hurt. That harm must be seen, and named, before it can be eradicated.

Natalie Frank: Unbound is on view at Kemper Museum of Contemporary Art (4420 Warwick Blvd.) until May 15, 2022. Museum entry is always free. Visit their website for programs throughout the spring, including tours, meditation, figure drawing sessions, and a trivia night.