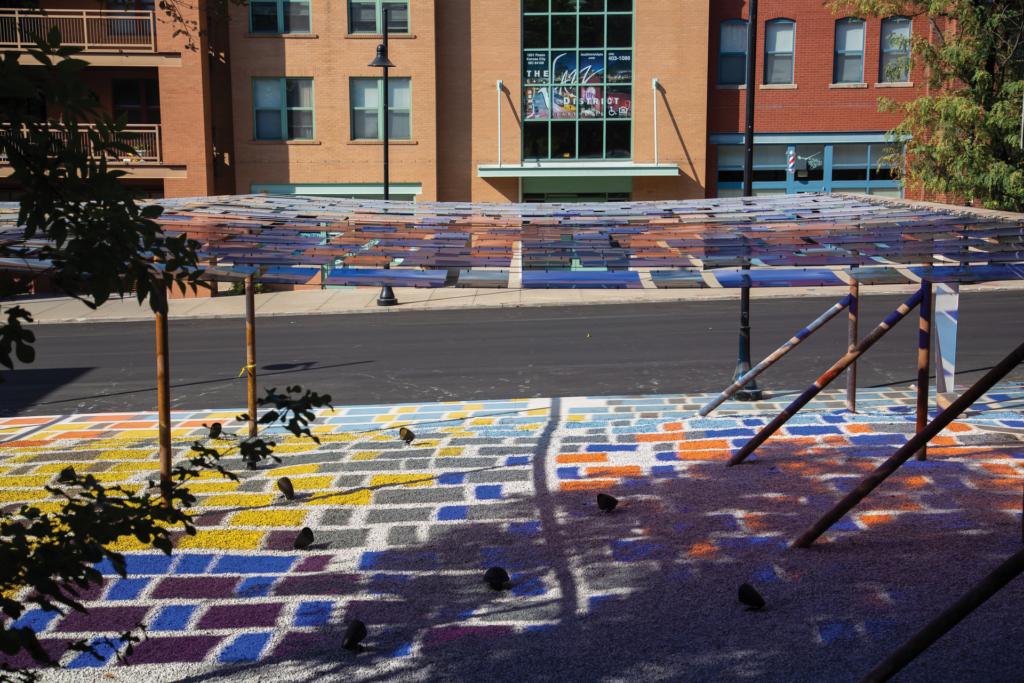 You remember those Family Circus cartoons where a black dotted line follows Billy’s tracks in the neighborhood? No? Well, apologies for being ancient, but: the line winds through the scene, showing where the boy zigzagged through yards, hopped over fences, climbed trees, and jumped over puddles. His mundane steps begin to seem something more like an exploration.

We thought of Billy as we traversed Kansas City during Open Spaces, the inaugural arts festival that debuted in September and continues through the end of October. Over 100 installations and performances from local and global artists are scattered across the city, and charting a path can be a challenge. But we’ve come to see that as part of the draw. It requires you to take time out of your routine and investigate remote and forgotten landscapes.

Among those is Swope Park, the festival’s epicenter and — not for nothin’ — one of the largest urban parks in the United States. Here, along the Limestone Glade Trail, one can decipher the hidden messages in Shawn Bitter’s “Burn Out” and Ebony G. Patterson’s hydrotherapy-pool-turned-memorial “…called up.” Then on to Dawn DeDeaux’s installation near Starlight Theater, where words from Paradise Lost are emblazoned on columns in reflective tape, illuminated by passing headlights.

After the sun sets, maybe your line wanders along 18th Street in the Jazz District, where Charlie Parker’s handwriting glows in neon lights affixed to the side of the Boone Theater in Nikita Gale’s “KCMO I Adore Your Every Move.” On Linwood Boulevard, your line buckles and swerves through Nick Cave’s eerie, kaleidoscopic Hye-Dyve, a 14-channel video installation in a deconsecrated Catholic church.

Maybe your line circles around and around, examining Flávio Cerqueira’s “Any Word Except Wait,” on the UMKC Commons, a sculpture of a young woman carrying a stack of books on her head, striding determined, eyes ever focused forward. We could go on. But, really, it’s up to you. What will your adventure be? What will your line look like?