Once upon a time, Kansas City worked 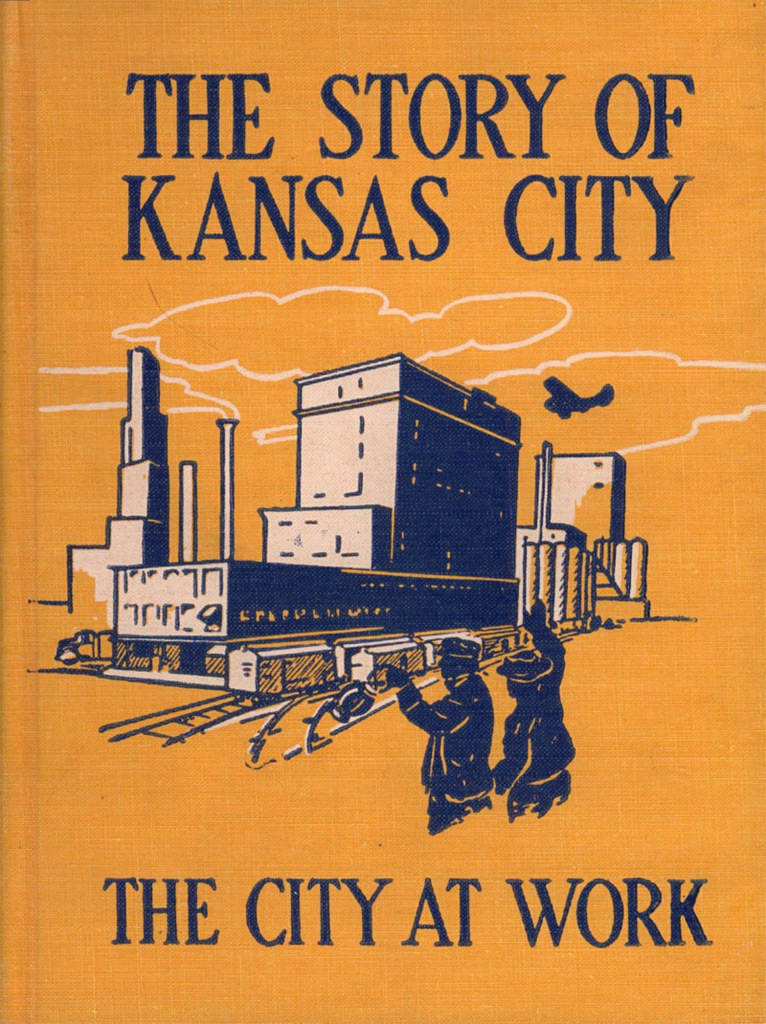 Title: The Story of Kansas City: The City at Work

The cover promises: At one time, Kansas City worked.

Representative quote: “The town was growing fast. However, the citizens were so busy making money that they did not have time to think how ugly their city was.”

Once upon a time, before the interstates came and before white folks and district funds skedaddled south, Kansas City schools dared ambitious projects. One example: a three-volume history of the metro illustrated by area high-school students. The third entry in the series, The City at Work, is a breezy and informative look at local industry and transportation. (The complete text of The City Beautiful, the second volume, is available online.) It’s difficult to imagine any public school doing something like that today. Perhaps Blue Valley kids are preserving their history in Tweets.

It’s also tough to imagine today’s students bothering to read a textbook in which the liveliest moment is the introduction of a pair of public-transportation advocates. Meet Nehemiah Holmes, who brought mule-hauled streetcars to town in the 1860s, and Robert Gillham, whose cable cars supplanted the mules. These familiar names presaged Quixotic light-rail advocate Clay Chastain. They also inspired this breathless passage: “How would you have liked to take a cable car ride on the Ninth Street Hill! Zoom! The cable car with its trailer slid down the steep hill. You held your breath. Would it be able to stop at the Union Depot? You were pleased when it did.”

Today, I feel something like that surge of exhilarating danger whenever I drive three months on KC streets without having my car’s alignment adjusted. Also, aren’t we lucky that streets tend to be given great citizens’ last names? Imagine trying to get a bank loan to open a business east of Nehemiah.

By the 1950s, buses and automobiles had taken over. The Story of Kansas City‘s accounts of noisy, fast-moving traffic sound like today, with one clear exception: “For many years, Jackson County has been known for making good roads.”

There’s a strange poetry to some of the book’s descriptions. Consider this imaginative account of Holmes’ mule cars: “Sometimes the men in the mule car had to get out and push it up a steep hill. Sometimes a mule would stop right in the middle of the track. He would go no further. The passengers did not mind too much. People were not in such a hurry in those days.”

Then there’s the description of what was Kansas City’s most famous work of bovine art overlooking Interstate 35 downtown: “The statue of the bull is twelve feet tall. It is made of glass and plastic and is a rich red color. The face of the bull is white. Such a bull, when alive, often sells for thousands of dollars.

“When the newspaper presses roll, they turn out the pages of life,” the authors write in a passage celebrating the crusading spirit of William Rockhill Nelson’s Kansas City Star, founded in 1880.

“The Star said that we needed good streets, paved sidewalks, better sewers and fine public buildings …. Over and over The Star asked the people of Kansas City to get busy. Everyone agreed that much needed to be done, but all were afraid the changes would cost too much. ‘Taxes are too high now. We can’t afford it,’ people said. ‘We need parks and boulevards,’ the newspaper editor wrote.”

Before moving on to cover Kansas City radio (KMBC first broadcast in 1920) and television (WDAF debuted in 1949), The Story of Kansas City looks toward a future that — sadly — won’t work out the way the authors hope. “Today The Kansas City Star is known to be one of the great newspapers in the country,” they write. “Perhaps some day there will be another here.”

A second great daily vital to our civic interests? Today, we’d settle for one.

A few other product-based home truths haven’t withstood the test of time, despite the authors’ enthusiasm.

Bread: “Many bakeries in Kansas City make the bread we need to grow strong and keep well. When we eat bread, we are eating seed, sunlight, rain, snow, and the richness of the earth.”

Greeting cards: “The business that is built on being thoughtful to others has become a big one.”