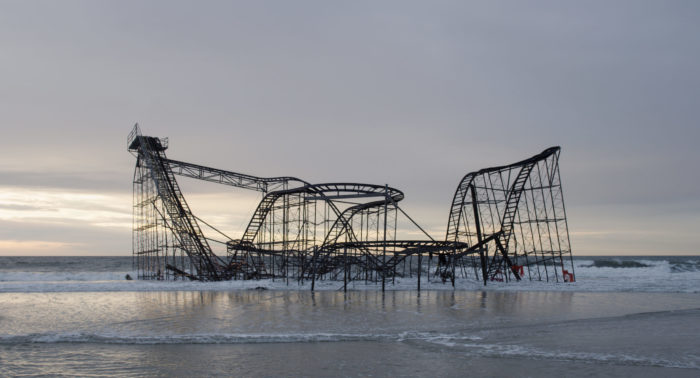 As I started a week’s vacation Friday evening, I happened upon a film called “Homo Sapiens” (2016) by Austrian filmmaker Nikolaus Geyrhalter that features scenes of abandoned human-built structures around the world in the process of being reclaimed by nature. The effect being that of an eschatological science fiction scenario where our civilization has been destroyed in some catastrophe and no people are left to witness the gradual erasure of all evidence of our presence.

The same day I had read a steady stream of news stories about the Delta variant of the coronavirus ripping through the US population as huge numbers of people remain unvaccinated. While confusing government public health messages—doubtless the result of medical experts being overruled by politicians—have resulted in most people ditching masks in all situations. Causing more “breakthrough”cases of the incredibly contagious Delta in fully-vaccinated people than evidently expected and many more cases overall.

Notably here in Massachusetts, where a series of Provincetown festivities from July 4 onward have led directly to over 400 cases of COVID and rising—including in two fully-vaccinated people I know personally. A situation I predicted in my June 14 column “The Pandemic Is Not Over Yet: Mass residents need to stop running amok in public spaces.” Not because I am in possession of any psychic, mystic, or spiritual powers, but by dint of simply keeping up with the latest medical science in the mainstream press. For which I was mocked by readers who don’t do the same in times of crisis. Although most people are perfectly capable of doing so. Preferring instead to listen to their own selfish inner monologues, cherrypick what little they hear from experts on social media, and mistakenly believe they are free to resume their pre-pandemic lives—maskless and clueless. Spreading a coronavirus variant many times as contagious as the original virus as they go about their rounds of family reunions, dance parties, and booze cruises.

While reflecting on that development, I also read articles about a heat dome that is about to settle over the middle of the country and stay put for days. Yet another catastrophic heat wave of exactly the type that climate scientists have been predicting for decades—while political establishments worldwide, captured by the oil, coal, and natural gas industries as they are, have actually presided over the continued catastrophic growth of global carbon emissions. Which are on track to be at their second highest levels in human history this year, according to an April report by the International Energy Agency, after dropping significantly last year due to the lockdowns in many industrialized nations during the first wave of the pandemic. And just a few days ago, that same agency predicted that 2023 is on track to be the worst year for carbon emissions in history.

Meaning that all the international climate treaties from the Rio Declaration of 1992 to the Paris Agreement of 2015 aren’t worth the recycled paper they’re printed on.

So what am I to make of our species’ response to both a terrible pandemic that will likely kill millions more people before it’s done with us and the accelerating catastrophe that is global warming? Both are caused by human action (despoiling the environment, in brief) and made far worse by human inaction. Both crises result in our political and economic establishments promising the moon in terms of swift action to remediate their negative effects and delivering the scorched earth beneath our feet in the form of more profits for the rich. Both result in most people becoming briefly terrified after hearing news of one related outrage or another and temporarily trying to do the right thing for humanity and the planet, then relaxing prematurely and allowing themselves to participate in activities that make the situation far worse. Be it taking off their masks in the case of the pandemic or buying more SUVs in the case of global warming. And continuing to elect servants of the rich sociopaths who are running human civilization off the rails throughout.

Well, as I sit here at home on staycation—unable to go anywhere else because the absolutely unnecessary Delta wave of the pandemic in the US makes it too dangerous to do so—I cannot help but think that humanity’s future looks a lot more like that film “Homo Sapiens” than any more rosy assessment. Within decades not centuries. Which is to say that I’m not so sure the human race has much of a future. Because if we can’t defeat a virus that we’ve already developed excellent vaccines against in record time, how can we stop the vastly more complex and pernicious threat that is global warming before it stops us.

I truly hope that you all will prove me wrong through resolute grassroots action in the service of humankind. But like the Cassandra of Greek mythology—and I say this as an American of Greek ancestry—I sometimes feel that I am cursed to utter true prophecies, but never to be believed.

This piece is reprinted with permission via DigBoston.